Driving home the state's argument that many school districts engage in wasteful spending habits, Cruz drew on the example of one low-income district – Socorro ISD in El Paso Co. – that used tax dollars to build a water slide, with the idea that it would help retain students. But as Cruz came close to also criticizing districts that pour money into their football programs, Abbott hastened to interrupt. Football, Abbott said with a light chuckle, is an important part of Texas culture. "In no way are we arguing that Texas football should be cut back at all," he said.

One could argue that spending priorities vary according to each district's needs, but if the Supreme Court ultimately rules for the state – giving the Legislature decision-making power on how schools spend their tax dollars (football, yes; water slides, no), then Socorro may have to resort to bake sales to cover the maintenance costs of its aquatic center. It's uncertain whether the $4 million bond project has paid off in the long run, but the center does provide a year-round recreational facility for low-income minority students, some of whom consider a indoor plumbing as much a luxury as a swimming pool – and Socorro boasts a relatively low dropout rate of under 2%.

The Supreme Court justices heard more than two hours of arguments last Wednesday in the state's appeal of a trial judge's ruling that faulted the existing funding mechanism for public schools. District Judge John Dietz has given lawmakers an Oct. 1 deadline to overhaul the system. The state's position is that the courts shouldn't meddle in these types of policy decisions, while attorneys for the plaintiffs – more than 300 school districts – argue that the court is the better arbiter in resolving inequities in school funding.

Spectators in the crowded courtroom ranged from education advocates, to lobbyists, to legislators, including Rep. Kent Grusendorf, and Sen. Florence Shapiro, who chair the House and Senate committees on public education. The court heard the arguments on the same day the Texas House narrowly passed a GOP tax bill that carries a huge cut in property taxes – the primary funding source for schools – and virtually no new money for education.

The justices proved active listeners, questioning lawyers on both sides throughout the proceeding. Justice Scott Brister reserved his toughest questions for the plaintiffs' lawyers, while tossing a number of softballs to state attorneys. Other justices weren't so willing to let the state off the hook. On the issue of state mandates and academic standards, Justice Harriet O'Neill asked, "What if the state defines standards but gives no money to fund [them]?" Do the courts have to "wait until the system fails [to intervene]?"

Later, Brister took issue with one of the plaintiff's attorneys, David Thompson, for arguing that school districts lack the proper funding to comply with state and federal mandates. Responded Brister: "There is not one school district in the state that doesn't have a little bit of fluff in their expenditures." Thompson replied that districts are forced to spend most of their revenue trying to meet requirements. "We just need a funding system that will support the high standards," he said, adding that while property values have increased, "that does not translate into more money for public schools," particularly with the school population growing by 80,000 students a year. Another Legal Battle Lost in the Fight for Abortion Rights
While ACLU fights for a few more weeks of abortion services, providers look to haven states 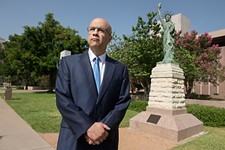