Candies derived from marijuana flowers contain no THC, but still raise the ire of politicians 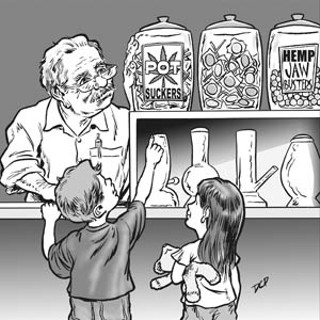 From the recent official frenzy over the sale of cannabis-flavored lollipops, gum, bonbons, and other candies, you might think the confections were new products, that they might contain one of the psychoactive compounds found in marijuana, and that they are illegal. To set the record straight: Cannabis candies are not new, do not contain tetrahydrocannabinol (THC) or any of the other psychoactive ingredients of marijuana, and they are not illegal – at least in the notoriously sober judgment of U.S. Customs agents and the FBI.

That hasn't stopped the Chicago City Council from banning the candies, and it hasn't discouraged Texas state Rep. Aaron Peña, D-Edinburg, from authoring new legislation (HB 74) to ban the sale of any confectionery containing any marijuana-derived ingredients. According to a Peña press release, the sale of cannabis candies is a means to "entice our children into a life of illegal drugs," through the "legal marketing of the drug culture to our children by the sale of marijuana candy." That was also the sentiment of Chicago Alderman Edward Burke, who sponsored the city's ban on the offensive lollipots: The sole purpose of the "hideous candy" is to groom another generation of drug addicts, he said. "I can't imagine the degree and the extent to which people will go to make … a buck on kids, trying to get them to experiment with something that is going to be a lead-in to the use of marijuana." Under the Chicago ban, passed last week, stores selling the candies will face up to a $500 fine and the possible revocation of their business licenses. Under Peña's HB 74, selling or offering to sell a cannabis confection to a person would be a Class A misdemeanor offense, punishable by up to one year in jail and/or a $4,000 fine. (Unless Gov. Perry adds the pot candy crisis to his special session call, Peña's bill is little more than grandstanding.)

At the center of the reactionary rhetoric and stiff penalties being proposed by Peña and others are the kind of lollipops and sour candies sold by Corona, Calif.-based confectioner Chronic Candy (www.chroniccandy.com), which sells lollipops – under the slogan "every lick is like taking a hit" – with names like "The Chronic" and "Acapulco Gold," spoofing various strains of the evil weed. Nonetheless, they are simply candies, made with an extract taken from marijuana flowers, and contain absolutely no THC – as confirmed by a recent Food and Drug Administration analysis of Chronic's candies, says Tony Van Pelt, the company's founder and president. And Matthew Huijgen, whose company, Cannabis Candies, sells a variety of cannabis confections, confirms that, unlike other cannabis-derived food products – foods containing hemp seeds or hemp oil, which contain traces of the psychoactive ingredient – cannabis candies contain no THC whatsoever.

Van Pelt knows that his company's marketing is a little cheeky, but says that the indignant reactions of late are over the top. Neither Van Pelt nor Huijgen sell or market their candies to children – the confections are retailed only in liquor stores and head shops or online for credit card purchase – and Van Pelt thinks that the recent hullabaloo is nothing more than theatrical politicking. "There are just so many other things that are problems," he said. "I never thought this would happen." Van Pelt has been selling the candies for six years without consumer complaint and without any trouble from local or federal law enforcement. Moreover, most of his candies are imported from Germany, with approval of the U.S. Customs Service. And Van Pelt got de facto approval from the FBI, which signed off on his candies after a 2002 investigation. The narcos thought the boxes contained drugs, he said, because of the strong odor coming from the lollipots.

But official critics say no one in their right mind would actually want to suck on a stick of fibrous-tasting hemp-flavored candy, no matter how sweet. The only reason that anyone would buy and eat the stuff, officials (including Peña) charge, is to buy into the drug "lifestyle," which Van Pelt glamorizes by marketing his candies as "highly addictive" and tasting "like the real thing." "We … need to be vigilant for the ever increasing legal attempts to divert our children down the wrong path," Peña wrote in a press release.

That's a bunch of hooey, says Van Pelt. "They're saying that people don't buy the candy for the taste, but for the 'reaction.' But there is no reaction; it's not going to be like, 'Ooh, let's go smoke some pot now,'" he said. If that were the case, he asks, then isn't marketing nonalcoholic beer also a problem? "What message is O'Doul's sending?" he asked.

Van Pelt says he would be more than happy to sit down with his critics and listen to any suggestions they might have to ensure that kids don't end up with the candies. "I'll fly wherever, [and they can] sit down and show me what [they] think we can do; give me a lead," he says. "But no one has done that." Neither Peña nor officials from Chicago have ever called Van Pelt directly about his Chronic confections; nor did Peña return calls for this article. And despite his open-door confection conversation policy, Van Pelt said that he recently received a subpoena seeking his business records from the Illinois attorney general's office. Van Pelt says that although the subpoena requires only that his records be in Illinois on July 12, he intends to hand-deliver them. "I'm not stupid; I'm not trying to do anything illegal," he said. "[And] I plan to take [the records] there myself."