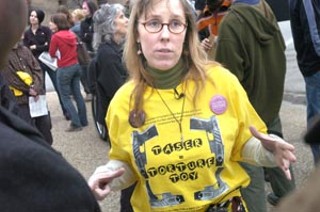 Austin police's use of Tasers has drawn a great deal of criticism; Austin activist Debbie Russell, shown here, was among many at this protest outside APD headquarters earlier this year. (Photo By John Anderson)

Federal Law Enforcement Training Center officials say a standardized training program for Taser weapon use by police may be needed to avoid "inconsistencies" in where Taser use is placed on police agencies' use-of-force continuums, according to a new U.S. Government Accountability Office report released June 27. For its new report on Taser use, the GAO reviewed Taser policies, procedures, and training standards used by the seven state and local law enforcement agencies that have purchased and that use the largest number of Tasers for the longest period of time, which includes the Austin Police Department. According to the GAO the seven agencies – the APD; San Jose, Calif.; Phoenix, Ariz.; and Sacramento, Calif. police departments, the Orange Co., Fla., and Sacramento sheriff's departments, and the Ohio Highway Patrol – each have comparable training procedures and policies regarding Tasers.

The seven agencies placed Taser use at three different levels on the use-of-force continuum, however. For example, the Sacramento agencies placed Taser use as the second-highest level of force, just below deadly force, while the APD and three other agencies placed electro-shock weapon use at a level on par with the use of chemical sprays – for use when suspects are "actively resisting" arrest, but are not behaving aggressively with officers. Only the Orange Co. Sheriff's Department authorizes Taser use against suspects who are only displaying a "passive resistance" to officers, by not responding to verbal commands. For the entire report, go to www.gao.gov/new.items/d05464.pdf.