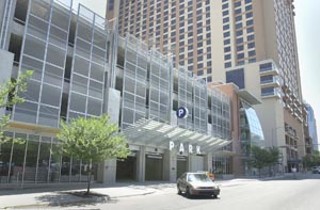 The city of Austin has lost court battles over its eminent domain seizure of downtown property to build this Convention Center parking garage; it is unclear what effect the Supreme Court ruling will have on those decisions. (Photo By John Anderson)

In a June 23 ruling that has generated instant controversy – including proposed legislation down at the Texas Capitol – the U.S. Supreme Court ruled that local governments have the right to seize private property to promote "economic development" plans, even though those plans may primarily benefit private interests. At issue are the parameters of the Fifth Amendment's "Takings Clause," which states that private property cannot "be taken for public use without just compensation," under the principle otherwise known as the state's "eminent domain." Generally, the clause's "public use" portion has been interpreted to mean that the government cannot take private property unless the purpose of the taking will be for the use of, or to the benefit of, the public as a whole.

That interpretation that has been used to uphold takings for projects like railroads, mining operations, and, more recently, for projects of "urban renewal," where neighborhood blight was deemed so profound as to pose an imminent risk to public health and safety. However, in the current case, styled Kelo et al. v. City of New London et al., the city of New London, Conn., sought to take the property of home and business owners in the waterfront area of the city in order to further a large-scale "economic development" project that city officials said (and the state's supreme court agreed) would "create in excess of 1,000 jobs … increase tax and other revenues, and … revitalize an economically distressed city," wrote Justice John Paul Stevens. Not everyone in the neighborhood was happy with the city's decision to take their property in order to build office space and other facilities that, in general, would simply benefit private interests, and a group of homeowners sued.

The Supremes ruled that the takings were, in fact, constitutional. "Promoting economic development is a traditional and long accepted function of government," Stevens wrote. "There is, moreover, no principled way of distinguishing economic development from the other public purposes that we have recognized." The majority – which included the court's more liberal justices – positioned itself on the side of federalism, affirming the notion of state sovereignty. The four-justice minority – Chief Justice William Rehnquist and justices Sandra Day O'Connor, Antonin Scalia, and Clarence Thomas, each typically supportive of states' rights – strongly disagreed with the majority's conclusions. O'Connor opined that the decision renders the Takings Clause meaningless, because "nearly any lawful use of real private property can be said to generate some incidental benefit to the public. … Nothing is to prevent the state from replacing any Motel 6 with a Ritz Carlton, any home with a shopping mall or any farm with a factory."

The majority noted that the decision does not foreclose the power of states to narrow the circumstances under which eminent domain can be asserted. "We emphasize that nothing in our opinion precludes any state from placing further restrictions on its exercise of the takings power." It didn't take long for Texas officials to muster a healthy dose of indignation at the high court's sweeping decision. That afternoon, Rep. Frank Corte, R-San Antonio, announced his intention to "defend the rights of property owners in Texas," by filing a constitutional amendment that would limit the circumstances under which local governments can employ eminent domain, "preventing them from bulldozing residences in favor of projects for private companies." (Other legislators promised similar bills.)

The Texas Constitution currently permits takings for public use and with just compensation, but the circumstances under which municipal governments can exercise that power is curtailed by the Local Government Code. Eminent domain can be used for building various public facilities (police stations, parks, or schools), or for public utility construction or improvement (roads, drainage systems, cemeteries, or water or sewage treatment facilities), or for "any other municipal purpose the governing body considers advisable," so long as it remains within the "public use" framework. The fairly lengthy list of permissible takings includes none of the more private endeavors such as those in the Kelo case.

On June 8, the limitations of that statute in part prompted Texas' 3rd Court of Appeals to reject the city of Austin's use of eminent domain to seize a tract on Red River, between Fourth and Fifth streets, that belonged to Harry Whittington – a taking the city had deemed "necessary" to build a convention center parking garage. (The city later said the property was also needed to house an Austin Energy chilling plant.) Whittington argued that the taking of his property would further a private interest – convention center hotel developer Hilton, which initially planned parking elsewhere sufficient for the project needs – and that, moreover, there was no necessity for the city to condemn his property in order to provide more parking, since other city-owned garages are adequate. The 3rd Court sided with Whittington and remanded the case to Travis Co. district court for reconsideration, ruling that the city had failed to prove that the condemnation was either necessary or permissible. "At most, the City's … proof might establish that, as an abstract proposition, parking garages and chilling plants can be public uses under Texas law," Justice Bob Pemberton wrote. "But nowhere in the City's … evidence is there proof of any legislative determination to condemn the Whittingtons' property for one of these uses."

It's not yet apparent whether the Court's decision will have any effect on the proceedings in the Whittington case.