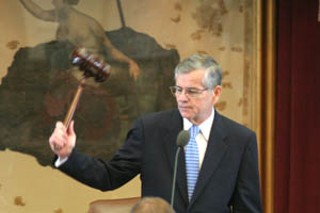 With a bang of his gavel, Speaker of the House Tom Craddick called the Texas Legislature's special session on property tax and school finance reform to order Tuesday. The governor presented a proposal that would cut property taxes by $7 billion and boost school funding by $5 billion. Then legislators adjourned until Monday. (Photo By Jana Birchum)

• On Saturday, June 18, longtime Austin Rep. J.J. "Jake" Pickle died at 91, after a long illness. Pickle served as U.S. representative from Austin's 10th Congressional District from 1963 to 1995, and was well-known for his devotion to Great Society programs and his tireless constituent service.

• They're back: After much speculation and uncertainty, Gov. Rick Perry vetoed the 79th Legislature's education spending as a prelude to another Special Legislative Session, aimed at property tax cuts and school finance reform – but who knows what other mischief they can get into.

• In a tumble of political dominoes, Sen. Kay Bailey Hutchison announced that she will not run for governor, but for re-election; and Comptroller Carole Keeton Strayhorn's noisy other shoe finally fell – she will challenge incumbent Rick Perry. See "On the Lege."

• Public questions continued to mount over the June 8 police shooting of 18-year-old Daniel Rocha in a botched Southeast drug stakeout, as a public forum intended to air grievances began angrily and went downhill from there. See "Rocha Shooting: Plenty of Questions, Few Answers."

• The family of Daniel Rocha, who was killed on June 9 by APD Officer Julie Schroeder in Southeast Austin, is asking for donations to help pay for funeral expenses. According to a press statement, the family buried another loved one earlier this month and, as a result, has no money to pay for a funeral for 18-year-old Daniel. For more information, call Marcos De Leon at 512/576-7805. – Jordan Smith

• Austin ISD held another round of forums to solicit opinions on its planned redesign of Austin high schools. The district proposes breaking large, impersonal high schools into "small learning communities" – basically, career-oriented schools within schools that emphasize AISD's oft-repeated "four R's" of rigor, relationships, relevance, and results. At the forums, though, it became clear that many in the AISD community want to see a fifth R – respect – added to the list. At a discussion of "relevance," for example, group facilitators had a hard time keeping the discussion on the topic of relevance as AISD defines it – i.e., career relevance. Instead, the group spoke passionately about the need for more engaged teachers, better discipline policies, and respectful environments. The district will conduct the next round of forums in the fall. – Rachel Proctor May

• Harry Whittington continues to sue – and win – against the city of Austin in the fight over the condemnation of the block downtown that became the city's convention center parking garage. Whittington insists the city abused its eminent domain powers when it took his land to build the combined garage and chiller site. Developers say the city condemned and bought the land under the parking garage on Red River Street between Fourth and Fifth – at a price of $3.5 million – for far less than it was actually worth, perhaps as much as $7 million. Earlier this month, the 3rd Court of Appeals agreed with Whittington. The city is expected to appeal to the Texas Supreme Court. – Kimberly Reeves

• Communities in Schools and the Travis County Mental Health Mental Retardation Center each received a $100,500 grant from Impact Austin. The MHMR grant will be used to set up a voice mail system to help clients of the social services stay in touch with their family or potential employers. CIS will use the money for a center for at-risk boys in AISD high schools. The grants are funded by Impact Austin members, all of whom are women who earn their membership through a $1,000 donation, and who help research and evaluate different proposals. The group hopes to have 300 members by next year so they can give three of the six-figure grants. Ladies with a chunk of change to drop on a worthy candidate can find more info at www.impact-austin.org. – R.P.M.

• County commissioners went ahead and voted to hand over the streets in the upscale Rob Roy neighborhood this week, even though neighbors were still split on whether streets should be abandoned and homeowners assessed a fee to pay for the installation of gates and the maintenance of six miles of streets that would no longer be in the county road system. Dan Gilliam, who spoke against the gates, said it was a matter of principle. You could start with the gates – overruling the objections of a minority of homeowners – but what would be next on the list? While sympathetic, County Judge Sam Biscoe said the bottom line was that Rob Roy faced a public safety issue, which no one disputed. Commissioner Gerald Daugherty, who sat in on negotiations last week, said the gates were the best solution to cut the volume of cars wanting to get between two major state roadways. – K.R.

• The Travis Co. Sheriff's Office is seeking "motivated" volunteers to join the department's Reserve Deputy and Reserve Corrections officers programs. Reserve deputies are unpaid, and must commit to serving at least 16 hours each month in uniformed patrol, warrant service, undercover operations, correctional functions, and lake patrol, among other areas. Applicants must meet the same employment standards required of full-time officers. Reserve deputies will be trained free of charge during the department's next evening academy program, which begins in January 2006. TCSO asks interested volunteers to attend an informational meeting at Hills Cafe, 4700 S. Congress, on June 28, at 7pm. For additional info, go to www.tcsheriff.org or call Officer Bob Brown at 512/854-3244. – J.S.

• Earlier this month, Mayor Will Wynn addressed the 73rd annual conference of Mayors in Chicago, giving a presentation titled Smart Energy Best Practices for Livable Communities, along with Austin Energy's Roger Duncan, who focused on Austin's plug-in hybrid vehicle initiative. "Austin is at the forefront of the transportation debate," Wynn said. "The beauty of this system is that vehicles charged by the electric system will run on alternative energy sources such as West Texas wind instead of Middle East oil." The city's plug-in plan, first introduced last September, involves purchasing a fleet of next-generation hybrid DaimlerChrysler Sprinter vans for city use, charging them at night with wind power from Austin's award-winning GreenChoice renewable energy utility program, and asking other cities to buy similar fleets of plug-ins, placing huge bulk orders. The goal is to create an economy of scale for the vehicles, making them more affordable and plentiful for everyone. The plug-ins increase fuel economy by 50%, significantly decrease emissions, and are capable of 20 miles worth of all-electric urban driving, according to Duncan. – Daniel Mottola

• According to a national poll released last week by Survey USA, Texas Republican Sen. John Cornyn has the lowest public approval rating of any U.S. Senator. According to the poll, only 40% overall said they approved of Cornyn's job performance (compared to an overall 64% favorable rating for Texas' other GOP Sen. Kay Bailey Hutchison). Wouldn't have anything to do with his comparing same sex marriage to the union of man and box turtle, would it? Or, perhaps his creepy threat from the Senate floor in April, when he suggested that violence against judges was the result of their "activist" decisions? – J.S.

• When the Longhorn Partners Pipeline LP got approval to begin pumping gas in a 50-year-old pipeline stretching from Houston to El Paso – crossing South Austin and extending over parts of the Edwards Aquifer as it goes – the company agreed to an environmental mitigation plan that involved an in-line inspection after three months of operations. That time has come, and the company has asked to amend its mitigation plan to delay the inspection indefinitely. This irked U.S. Rep. Lloyd Doggett, a longtime opponent of putting the pipeline back into operation (It had been out of use since 1995, and opponents argued that transporting highly flammable fuel through residential neighborhoods, and through the Barton Springs watershed, wasn't too smart.) In a letter last week, Doggett urged Transportation Secretary Norman Y. Mineta to reject the company's request to change its mitigation plan, and that "Longhorn Pipeline should be ordered to cease operations until they complete the in-line inspection, make necessary repairs, and comply with all the requirements of the mitigation plan." – R.P.M.

• Former U.S. Rep. Nick Lampson has indicated that he'll challenge House Majority Leader Tom DeLay in CD 22 in the 2006 election. In an e-mail to supporters last week, Lampson wrote he was running for Congress because people in Texas are tired of controversy and investigations. "We must move away from the power plays and bitter partisanship that now grips Washington, and get back to doing the people's business," he wrote. "To do that, we've got to get Tom DeLay out of Congress." Lampson, who had a steady but unremarkable four terms in Congress, lost to Ted Poe when Congressional lines were redrawn with a helpful hand from DeLay. To beat DeLay, Lampson is going to have to make up for lost time. While the biggest landmark in Lampson's former district was the Johnson Space Center, his real base of support was in Jefferson County, where he served as county tax assessor-collector for two decades. Lampson's campaign Web site is at www.lampson.com. – K.R.

• recommend strategies for prevention and treatment of the major diseases, disabilities, and death that disproportionately impact African-Americans in Central Texas;

• work with agencies, organizations, and the community to determine who should implement those recommendations;

• develop a funding plan for supporting the activities;

• develop funding plans for continued operations of the Alliance.

For more info, or to get on the distribution list for the Alliance's newsletter, call 922-0503.