The Good and the Bad

'Texas Monthly's biennial list of 'Best and Worst Legislators' is out 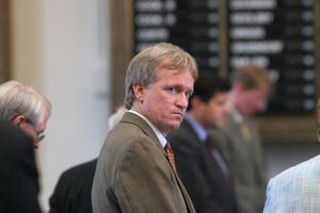 If a bruising re-election defeat qualifies as an incumbent's worst nightmare, then a public skewering in Texas Monthly's biennial list of "Best & Worst Legislators" must rank a close second in the realm of humiliating political moments.

Fortunately for Rep. Terry Keel, R-Austin, his announcement that he wouldn't seek re-election preceded last week's news of his Worst showing in the monthly's 2005 picks. Keel made the list for "wanton acts of bill-killing for personal reasons" – a reference to his now-famous floor slaughtering of two major bills, one of which held up the judiciary's first pay hike in nine years. But how lucky is Austin to have not one but two delegates in the Top 10 Worst pack – Keel for what he did, and senior Democratic Sen. Gonzalo Barrientos for what he didn't do, owing to the magazine's description of his "lighter-than-air legislative program." The only other Central Texas rep on the list – rising star Dan Gattis, R-Georgetown – earned a Best placement from the monthly for rising above the "knee-jerk GOP freshman class of 2003."

As in past sessions, Capitol observers had begun handicapping the Best & Worst lineup long before the magazine's official unveiling of its postmortem performance review. In fact, rumors that Keel would be singled out for bad behavior cropped up on the same day he announced his candidacy for, of all things, a judiciary vacancy. (He is seeking an appellate court bench.)

Few legislators would own up to having their egos bruised by the taint of a Worst tag, but no amount of forced shrugging can take away a bigger truth – that the biennial report card is less editorial opinion than it is a fairly accurate statement of how their colleagues feel about them. At last week's press briefing, the monthly's Paul Burka recalled former Rep. Arlene Wohlgemuth's one-time stint on the Worst list. After the humiliation wore off, Wohlgemuth recounted for Burka how, in the immediate social awkwardness that followed, even longtime colleagues avoided making eye contact with her.

There's no magic to selecting which 20 lucky and not-so-lucky souls make the list, Burka said, just the same simple measuring stick that early childhood teachers use to assess how a student works and plays with others.