City in Court Against SoCo Cafe 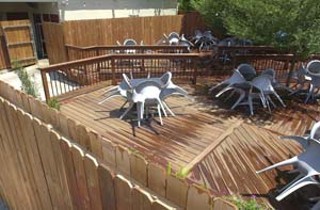 The city of Austin is scheduled to go to court July 13 after filing class C misdemeanor charges for unpermitted construction on the South Congress Cafe, owned by the Truesdell family of the local Trudy's chain. (On Tuesday, the cafe received a continuance, but the case is still pending.) The charges were brought against the owners, Trudy's Texas Star Inc., by the Zoning Enforcement Division of the Solid Waste Services Department, after building inspectors from the city's Watershed Protection and Development Review Department issued three consecutive stop-work orders during the construction of a privacy fence, deck, and outdoor bar throughout February and March. In general, the city's complaints concern the expansion of the restaurant without an approved site plan and without provisions for adequate parking to serve anticipated customers – indeed, the new deck is built directly over the restaurant's former parking lot.

The dispute also reflects ongoing tension between South Congress businesses and the surrounding neighborhood associations, with the specific case highlighted by Trudy's founder Gary Truesdell's son, Stephen, who stepped in on the family's behalf to oversee the latter end of the construction project. Stephen Truesdell's full-time job is as an Austin firefighter, and he's vice-president of the Austin Association of Professional Firefighters' union and treasurer of the Firefighters' political action committee, prominent supporters of newly elected Council Member Jennifer Kim, who lives near the cafe and held both of her election night parties at the restaurant. Prior to the June 11 Place 3 run-off, members of the Bouldin Creek NA were wondering aloud if Truesdell was setting a standard for compliance with city zoning laws that would persist if Kim were victorious. Truesdell told the Chronicle that Kim is simply a friend and good customer and was unaware of the restaurant's problems with the city.

On Monday, Kim said that she did not know about the cafe's legal issues until a Bouldin Creek NA member brought them to her attention on June 9, but that she had since spoken to the Truesdell's legal counsel and emphasized that "all businesses have to comply with the rules." Regarding the city's efforts to bring the restaurant into compliance, she said, "We have a process in place for that, hopefully it will be followed." Kim said parking was something that needed to be looked at and that she believed owners could come up with "creative solutions" to solve the problems.

The city's citations were prompted by citizen complaints, and the cited code violations range from unpermitted plumbing in an outdoor bar to building on top of city right-of-way and sidewalk. Since February, the cafe had been issued three stop-work orders by city inspectors – yet construction continued to completion on the new deck and surrounding privacy fence. City officials say the citations are among the most flagrant they've seen, and may eventually require some demolition. That the cafe's deck addition covered its only dedicated parking spaces is particularly aggravating to neighbors, who say the loss of spaces forces patrons to park deeper into their neighborhood – also the main complaint about the monthly South Congress First Thursday revelry.

From the city's perspective, parking is the least of the cafe's legal worries. "I'm more concerned that the owner didn't come into compliance with stop-work orders – they just kept working," said Matthew Christianson of Solid Waste Services. The extent of the unpermitted construction also perplexes Assistant City Attorney Nancy Matchus. "They have built totally over the sidewalk and fenced it off; I don't understand that one," she said. The Public Works Department is concerned about wheelchair access being pushed into the street, Matchus said, which may take the form of a separate Americans With Disabilities Act prosecution depending on the results of the cafe's day in court. "They know the process after just renovating the building, [and] not following it seems surprising," said Matchus. People frequently plead ignorance and inexperience to code violations of this nature, she said, "but Trudy's?"

Stephen Truesdell said he's not acting as a manager but stepped in to help his father when it became apparent that the construction process had gone seriously wrong. "The full-time Trudy's employee that was overseeing the construction and remodel resigned during the deck project." He said restaurant management never received the first stop-work order (for the unpermitted construction of the rear fence), issued Feb. 17. Since the second stop-work order on March 9, he said, "We've been working diligently to resolve the situation." At that point, he said, the fence and deck were "substantially complete … except for hand rails and trim pieces," which were later finished. "We didn't start any new work." But according to city records, on March 14 yet another stop-work order was issued, for nonpermitted plumbing in an outdoor bar installed over the weekend.

Truesdell blames "bad advice" of a contractor that a permit was not required for the deck. Although Trudy's has three Austin locations and has moved into existing buildings before, Truesdell says this building was structurally unsound and had to be substantially renovated. "This is the first building we've worked on at this level of involvement as far as code issues," he said. "I would challenge anyone to go down and pull a commercial permit and get it right the first time – unless you're a professional consultant." The permitting process is not small-business friendly, Truesdell said. "It's corporate-friendly and consultant-friendly, but for the rest of us, it's confusing." Truesdell said he contacted neighbors on April 14 to discuss their concerns, and was told they'd caucus and get back to him, but he hasn't heard from them since.

Cory Walton, president of the adjacent Bouldin Creek NA, says that at the April 14 meeting residents asked that the project conform to city code, and that more seating should be accompanied by more parking. After hearing Truesdell's "hard luck" story of employee turnover and misinformation, Walton said, neighbors asked Truesdell to present them with design and engineering plans for the deck, which appeared to have been built to professional standards, so they could determine whether the original design met code. Walton says neighbors never received the documents.

Walton said the neighbors' scrutiny of new bars and restaurants is "all about the appropriateness of turning South Congress Avenue into an entertainment district" since it's flanked by single-family residential on both sides. "If they're coming in," he said, "they should damn well follow code and have at least enough parking spaces." Walton said the BCNA is considering asking for a zoning overlay on both sides of South Congress to prohibit bars and restaurants from locating within 350 feet of each other. "This would hopefully allow more homegrown retail to serve the local neighborhoods."

Truesdell said management is working on securing off-site parking near the restaurant and is close to finishing a new site plan, which would encompass parking, access, water runoff, and building layout among other factors, and will require approval by city staff. But meanwhile, much like a defendant in an arraignment, South Congress Cafe's owners will be expected to enter a plea when their day in court arrives. Matchus anticipated the continuance for more time to complete site plan preparations. But ultimately, she said, the restaurant must comply with city codes or else face fines or even criminal prosecution.