Battling for Music, History, and Learning

Juneteenth Battle of the Bands competition harkens back to days when marching bands enjoyed a celebrated place in Austin's black community, and creates opportunity for greater future African-American involvement in school bands. 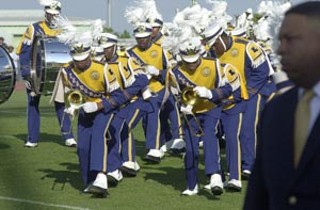 The sun was setting over Nelson Field in Northeast Austin last Friday when the marching band from Baton Rouge took the field. As they swagger-stepped in from the end zone, the gold tassels on their royal blue uniforms fluttered, their gold capes flapped, and their drummers pounded out an infectious, funky beat. The Louisiana Leadership All-Star Band was the champion at the first Alvin Patterson Battle of the Bands last year, so as the second battle kicked off Friday night, they were clearly the ones to beat.

Standing on the sidelines in a white button-down shirt and a red Juneteenth hat, Alvin Patterson sized up the competition. "These guys came for business," Patterson said approvingly, watching the Louisiana musicians file by. "They're sharp." Across the field, the Austin All-Star Band in their simple black T-shirts looked perhaps a bit less sartorially sharp, but no less ready for business. For the All-Stars, the Battle was the culmination of a three-week cram session in the head-swaying, high-stepping style of marching called "SWAC," for Southwest Athletic Conference, home to the historically African-American colleges known as much for their bands as for their football teams. For the man for whom the battle was named, it was about remembering a time when marching bands enjoyed a celebrated place in Austin's black community. And for Austin ISD, it was one step in an effort to rebuild a vibrant band scene that looks more like that past.

On Wednesday, two days before the show, Patterson attended rehearsal in the Nelson Field parking lot, across the street from Reagan High. The band warmed up with a peppy march, its straight military beat contrasting with the driving polyrhythms of the rest of its set. The song, Patterson said, was called "Dear Old A.H.S.," and he hadn't heard it for 34 years. "I guess when you get to a more mature age, you get a little emotional," he said, "but hearing that song sent chills all down my spine."

The last time Patterson heard the tune, he was conducting the L.C. Anderson band as the final class of AHS graduates was collecting its diplomas in 1971. AISD's only all-black high school was about to be closed as a consequence of school desegregation – and it remains a dark day for many black Austinites. (The old Anderson High became the district's Alternative Learning Center; AISD later named a Northwest high school Anderson.) The event also marked the end of Patterson's career as a band director. After directing the Anderson band for 16 years, he put down his baton when AHS closed and became a guidance counselor until retiring in 1984.

In the ensuing years, AISD's African-American students gradually drifted away from band participation. Now, barely a hundred of AISD's 10,000 African-Americans participate. It's a far cry from the days when little kids from the housing projects across from Anderson would come to watch the band practice, sometimes bringing buckets to bang on, back when county tax assessor Nelda Wells Spears was a teenage drum major. ("She was an outstanding drum major," Patterson recalled.) The band had lots of outstanding players then, and the community knew it. "We used to pack the place," Patterson said. "Austin's Eastside had a very tight-knit community, a very supportive community. A lot of people wonder why we don't have something like that now."

That's what Austin Eastside Story Foundation head Larry Jackson was wondering a few years back, when he came up with the idea of starting a battle of the bands. To Jackson, the lack of African-American interest in band isn't just a music-appreciation issue, but an academic one as well. "Students who are in band perform much better in school," he said. Band teaches discipline, helps keep kids out of trouble, and gives them a reason to feel invested in their schools. Still, Jackson says it was a struggle to get AISD behind the idea, and he credits trustee Cheryl Bradley with making it happen. This year, AISD gave $60,000 to the AESF-organized event. Among other things, the money helped pay for four trainers who taught the students – and band directors – SWAC-style marching.

Still, the camp and battle are only the first steps. During the year, AISD bands typically teach the more straightforward University Interscholastic League style, and some don't play the most contemporary of musical selections. To Jackson, holding a battle of the bands each June can raise awareness that marching band doesn't have to mean John Philip Sousa, but he says AISD won't recruit more students into its bands until they start playing music that appeals to "the hip-hop generation" all year long. "I'm not on some crusade to change band in AISD," he said, "but I know [the current style] is causing African-American students not to participate."

All-Star band director Ormide Armstrong says that come fall, he'll be working with AISD's other directors on music selection, and AISD's fine arts head Dennis Hopkins says change is coming. This fall, Johnston and Reagan will have new band directors, chosen in large part for their ability to relate to students' tastes. "If kids are having fun, they'll participate in the program," Hopkins said. "We're going to make a real effort to make the programs at Reagan and Johnston fun." Once the kids get involved, he said, the community will turn out to support them – he pointed to the crowds of 14,000 that jammed Nelson Field over the Juneteenth weekend as evidence that if you shake it, they will come.

And shake it they did. Dressed in their black T-shirts, the AISD musicians drew elaborate, moving designs on the field as three drum majors pranced before and around and among them. A crew of beige-clad dancers performed a strenuous routine, inspired by West African moves, that likely would have been illegal had the Lege's nationally mocked sexy cheerleading bill actually made it into law. When all was said and done, the All-Stars came in fifth – not bad, Hopkins pointed out, for a band that didn't even exist a month back.

Superintendent Pat Forgione was in the crowded stands, sitting with trustee Bradley, whose grandson enjoyed a snow-cone in her lap. Forgione, ever enthusiastic, said he was proud of the organizers and the students, and that he looked forward to other AISD bands working the SWAC style into their routines. (He added with a wink, "It's a good thing that bill in the Legislature didn't pass.")

On the sidelines, Alvin Patterson watched proudly, albeit somewhat tired from all the heat and activity. "There was a time when I used to run all up and down the bleachers, and you could hear my voice – without a microphone," he remembered. Midway through the All-Star set, he took to the field to guest-conduct the Anderson Yellowjacket fight song. As he climbed to the conductor's platform, Patterson got a standing ovation, and the dozens of Yellowjacket alumnae in the stands got a round of applause as well. While SWAC-style marching wasn't around when Patterson was leading the Yellowjacket band, he said he hopes the trend – and the competition that bears his name – will help kick off a marching band renaissance for Eastside schools. "I believe in teaching musicians to be well-rounded and able to appreciate all kinds of music," Patterson said. "This is one of those kinds of music."

Video clips of the Austin All-Star Band's performance are available on the band's Web site, www.austinallstarband.com.