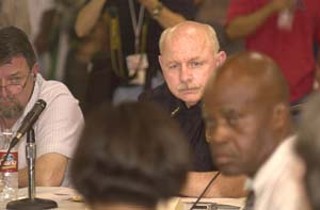 It was an angry crowd that gathered inside the Dove Springs Recreation Center on June 16 for a moderated "community meeting" with city officials there to answer questions about the June 9 Austin Police Department officer-involved shooting death of 18-year-old Daniel Rocha. As the meeting got under way, shortly after 7pm, it was difficult for any of the assembled officials – Mayor Will Wynn, APD Chief Stan Knee, Assistant Chief Rudy Landeros, Police Monitor Ashton Cumberbatch, among others – to complete a single sentence without interruption. "I understand your pain and your fear," Cumberbatch began.

"I try to, and that's why we're here tonight," he replied.

To be sure, hosting a community meeting (organized by Cumberbatch's office and the local chapter of the League of United Latin American Citizens) so soon after a "critical incident" was a new approach to addressing community concerns in the wake of a police shooting – but whether the format was well considered, or whether the meeting was actually effective as information or even public communication, remains debatable. Few of the officials seemed comfortable with the often-hostile crowd of well over 100 people – Wynn ducked out early, and City Manager Toby Futrell sat sideways for most of the evening, her body language suggesting she was trying to avoid the crowd. And whether anyone actually heard what police officials had to say about the incident over the loud and persistent interruptions, or whether anyone actually accepted the official information as truthful – remains completely unclear.

Shortly after 11pm on June 9, 18-year-old Daniel Rocha was killed with a single 9mm bullet to the back, fired by seven-year APD veteran Officer Julie Schroeder during a traffic stop that police say was connected to an undercover drug investigation. According to police, Schroeder and partner Michelle Borton were working backup for Southeast Street Response officers when they arrived at the intersection of Pleasant Valley Road and Quicksilver Boulevard to help Sgt. Don Doyle stop a Chevy Suburban that had reportedly been seen leaving a nearby house targeted in the drug investigation. As officers approached the SUV in which Rocha was riding, one passenger jumped out and ran away. Borton was able to get the driver into custody but Schroeder was not as successful in subduing Rocha, who police say began fighting with her. (At press time, police had not released the name of the driver nor the second passenger.) Police say Rocha fought aggressively enough to knock the electro-shock Taser gun from Schroeder's belt and to knock both Doyle and Schroeder to the ground. (Initial reports were that Doyle's leg was broken, but that was subsequently corrected to severe bruising.)

What happened next, ending with Rocha's death, remains very unclear – even after last week's meeting. In a press release on June 10, police said only that "during the struggle, Officer Schroeder fired her weapon once and struck Rocha." Sources close to the investigation tried to fill in the gaps, telling the Chronicle that when Schroeder got off the ground she saw Rocha crouched over Doyle, his hands out of view. Schroeder reached for her Taser, found that it was missing, and thought Rocha had taken it and was about to use it on Doyle; she pulled out her gun and fired once.

Officially, police haven't confirmed those details. At the meeting, Landeros added only that the "physical evidence at the scene indicates that Officer Schroeder's Taser and other equipment came off her belt," and that "Schroeder thought Rocha had control of her Taser." Landeros might have continued, but was quickly quieted by shouts from audience members who weren't buying the official departmental line.

Even with the additional detail, the story is hardly satisfying, and most of the questions fired at Landeros and Knee during the meeting were incredulous. If there was a struggle, why was Rocha shot in the back? Even if Schroeder's Taser had been knocked from her belt, why didn't she first try to use her baton, or pepper spray, before reaching for her gun? "Clearly there was a struggle," Knee responded to the first question. "[Schroeder's] equipment was laying all over the place." And to the second, Landeros replied that, "based on information we've received as fact-finders," Schroeder thought Rocha was armed with her Taser. In short, the audience asked good questions, but they were inevitably questions that, in order to maintain the integrity of the ongoing criminal investigation, will not be answered publicly until after the case has been forwarded to the Travis Co. District Attorney's Office and considered by a Travis Co. grand jury.

Still, there was no way for APD officials to evade a question from Daniela Rocha, Daniel's mother, who asked why the incident was not recorded by either Schroeder or Doyle's in-car camera system. "I want to know why the cameras were not on," she said. Doyle failed to check out a videotape that night, Landeros said (an apparent violation of department policy), and although Schroeder apparently thought she'd activated the camera, Landeros said, "the switch wasn't all the way on." Knee said that investigators are still in the fact-gathering stage, but that the officers' failure to record the incident would be thoroughly reviewed. "Internal Affairs will determine whether any policies were violated," he said.

Knee's intimation that the video transgression would not go unpunished was little comfort for Barbara Shorts, mother of Jesse Lee Owens, who was shot and killed by APD Officer Scott Glasgow on June 14, 2003, during a late night traffic stop. Shorts said she came to the meeting to provide support for Daniela Rocha. "I have to question your ability to lead, Chief Knee," Shorts said from her seat directly in front of the chief. "I've tried very hard for two years to be very patient; I observe, I don't act out. I've spent two years paying attention, and I wonder if you can regain the trust [of the community], because you don't have mine," she continued. "If you cannot lead that police department, then I beg of you … put somebody in there that can."

Shorts is not the only one questioning Knee's leadership of the department; in the days immediately following Rocha's death, LULAC wrote to the FBI, asking the agency to review the APD investigation into Rocha's death. On June 15, FBI officials notified Knee that they will be reviewing the case (although they added this is standard procedure in police shootings). And on June 16, Jim Harrington, executive director of the Texas Civil Rights Project, also wrote to the agency, asking that they expand TCRP's June 19, 2004, complaint that APD unfairly targets minority residents to include an investigation of Rocha's killing. "We respectfully request that you expand the scope of the investigation to determine whether Mr. Rocha's untimely death is more than an isolated incident," Harrington wrote.