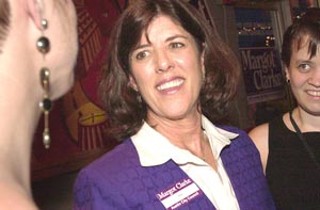 Fred McGhee didn't expect Margot Clarke's election night party to be so mellow by the time he got there Saturday night. "I expected to come here and have a victory party. That's why I came at 9 instead of 7," said McGhee, puffing on a cigar in solitude in the dim street light outside La Zona Rosa. It was about 10pm. For over an hour, disappointed Clarke supporters had been saying their goodbyes and giving their condolences to their candidate. "Girl, I'm so sorry," said campaign volunteer Toye Goodson, arms wrapped around Clarke's purple suit jacket, head on Clarke's shoulder, on her way out the club's patio gate.

Although Jennifer Kim was the underdog going into Saturday's run-off, she led the contest all day, ultimately taking 54% of the vote. This was a slap in the face to Clarke, who came out of the May 7 general election with 40% of the vote, compared to 27% for Kim. "I know we're all disappointed, but we all worked very, very hard," said Clarke, who inside, briefly spoke into a microphone on stage in front of a purple Margot Clarke sign outlined with little yellow Christmas-tree-type lights. "Let's keep fighting for our city. Let's keep fighting for our sense of community." She then stepped down onto the concrete floor and scooped up her blond, 5-year-old niece, Sierra. After that, she plopped down in a chair in the front row, turned to a compadre next to her, and said, "All right, where's my tequila?"

Back on the patio a little later, campaign volunteer Griffin Davis hugged Clarke and said, "Run again." Clarke's response: "You're asking me to open a wrist." She was referring to the fact that the Place 3 run-off got more than a little nasty. Attacks came from numerous directions. Among other blows, defeated Place 4 candidate John Wickham and conservative lawyer Marc Levin started Austin Taxpayers for Fiscal Responsibility, which filed ethics complaints against Clarke, charging that her campaign received Fair Campaign Finance Ordinance funds illegally. Texas Monthly Publisher Mike Levy e-mailed and mass-mailed a scathing letter about Clarke. And as recently as Friday, voters were receiving an automated phone message from defeated Place 3 candidate Mandy Dealey, urging voters to support Kim.

Clarke's response was considerably more moderate when asked by a reporter if she would run again: She said she wasn't thinking that far ahead yet. Meanwhile, campaign manager Elliott McFadden was cutting a mean rug to the upbeat cumbia tunes of Austin band Cerronato. He and his dance partner were among the first pairs to hit the floor. "Run-offs are a funny thing. It's about who gets out to vote," said McFadden, out on the patio a little later. "We didn't do as well in the south and southwest as we thought we would." Like Clark and many of her supporters, he blamed this largely on the negative jabs thrown at the campaign. After a couple of years, developers began to see Mayor Pro Tem Jackie Goodman's place on the council "as a pickup seat," and they did everything they could to get the more pro-development Kim in Goodman's seat, McFadden concluded.

Davis – who also helped with Clarke's unsuccessful 2003 City Council run against Brewster McCracken – said Kim has the potential to be a good council member: "We hope for the best with Jennifer. She said a lot of good things about Austin, the environment, and the progressive community. I hope she sticks to her word." Like many an old-school, grassroots Austinite, McGhee was basically thinking about the same thing while he puffed on his cigar out by the curb. "What does Jennifer Kim mean when she says she represents 'New Austin'?" he asked. Only time will tell.