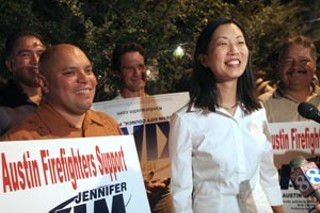 Jennifer Kim talks to the TV after learning of her victory. At her side is firefighters union President Mike Martinez; the firefighters' endorsement was crucial to her win. (Photo By Jana Birchum)

Okay, one of these things is not like the other. First off, Levin has another year before he becomes a thirtysomething, but more importantly, his politics are pretty far to the right of most of the party's attendees. And thus begins a deep-seated mistrust of Kim by Austin's environmental community?

Kim will certainly have some work to do to overcome doubters after defeating former Sierra Club and League of Conservation Voters staffer Margot Clarke for Place 3 on the Austin City Council. Having rabid right-winger and Republican Party loyalist Levin walking around her party crowing, "I think we pulled her over the line" won't help.

Kim seemed a bit baffled by support that came not only from Levin but also from a widely circulated spam e-mail from some lunatic accusing Clarke of pushing everything from Bolshevism to homosexuality.

Kim was quick to say that, while she was glad for any votes she got, anyone on the radical right viewing her as one of their own may be sorely disappointed. "I didn't like that letter," said the council's first-ever minority female and Asian-American. "Frankly, I didn't finish reading it, it was just so inflammatory. It's a free country, but people know where my values are: that I'm a progressive Democrat … I believe in protecting the environment, I believe in helping small businesses, I believe in diversity, I believe in a woman's right to choose; all those things are very essential to having a good quality of life."

Levin, who said he was planning to head over for a "Republicans for Kim" party, said, "Jennifer has a more practical approach to government. I heard her talk about police response times in Oak Hill, low water pressure in the northwest, and she went to Republican events, she spoke to us, she reached out. She said the same thing she said at Democratic events, which I thought was very pro-business and pro-environment, balanced the two." Asked what happens if a more bona fide Republican runs against Kim in three years, Levin said, "Well, I can tell you, having run for [the] citywide Austin Community College board … that's not gonna happen."

It's a positive spin, but one has to think conservative support was more anti-Clarke than pro-Kim – i.e., an over-the-top letter that Levy blasted out on May 26 that never mentioned Kim by name but begged readers to "please vote against Margot Clarke" because she "will place a higher priority on silly programs over the basic, core services …"

Those core services may well be what truly pulled Clarke over the line – the Austin Association of Professional Fire Fighters was the only one of the public safety labor unions that went for Kim instead of third-placer Gregg Knaupe in the general election.

"We have always told our firefighters that our endorsement is based on one issue and one issue only: firefighter issues and labor issues that pertain to us," said AAPFF's Martinez. "Jennifer was by far the best candidate on the issues that we presented. … Jennifer educated herself, she answered the questions better than any of the other candidates, and she proved that she was willing to educate herself and champion the causes that were important to our members."