A farewell to faithful servants, and a preliminary look at the city's priorities It's city budget time again, but before we dip reluctant toes into that abyss we should nod gratefully at the torch-passing of Mayor Pro Tem Jackie Goodman, a Council Member since 1993, and Daryl Slusher, her colleague on the dais since 1996. Their departures will be marked at their final council meeting today (Thursday), with mild pomp and ceremony at 5:30pm and what their staff members promise to be a "song-and-dance" tribute. ... The guess here is it can't be any worse than what sometimes passes for the evening's "live music" presentation, and should indeed be good fun for anybody with an interest in Austin life, politics, and public institutions over the past decade. Come on down ...

The new Council Members in Place 1 (Lee Leffingwell) and Place 3 (to be determined Saturday) will be inaugurated June 20 (along with Place 4's re-elected Betty Dunkerley) and take their places on the dais June 23. No doubt they will do fine, but it's worth noting in passing that Goodman and Slusher are stepping down not by personal choice, or even because they've worn out their welcomes with Austin voters. No, we lose their experience and judgment and independent edge and public institutional memory because of a reactionary Nineties fad for "term limits" that has done little but weaken our democratic institutions in favor of the permanent government of money and property. No diatribes today, but I'll be in favor of term limits for public officials when private ones get the same pink slips every few years and the CEOs (with their armies of middle managers and milk-fed lobbyists) all have to step down and join the rest of us on the assembly lines. "Fresh blood," and all.

In the meantime, while there will be plenty of time for thoughtful reconsiderations, here's a heartfelt thanks to Goodman and Slusher for their long years of public service to Austin, for their articulated convictions that city government can be more than just a bureaucratic engine of economic development, for their dedication to spreading democracy around from Downtown to all the neighborhoods – and for just leaving the campsite in better shape than it was when they arrived. 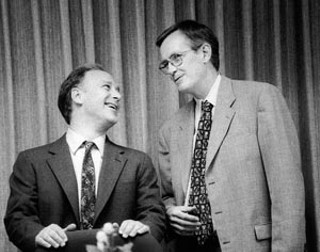 Back to the accumulating gray numbers. At the last meeting, somewhat below the headlines of the African-American quality of life report, City Manager Toby Futrell and Chief Financial Officer John Stephens presented the "draft policy budget," an outline of the 2005-06 framework to orient the council and get some responses on overall policy questions. Since the sharp post-9/11 downturn, the revenue flow has slowly but steadily returned to something approximating normal, although simultaneously the downward financial pressure from federal and state government has increased the pressure on local governments– Austin being no exception. The most important local response was the creation of the Travis Co. Hospital District, although it will be some time before we begin to see the structural benefits of that project.

The city staff's financial forecasts are accordingly optimistic, but only cautiously so. The language of the budgeteers runs thusly: "We are seeing a slight rebound in our property tax and sales tax revenue, but at the same time continue to face expenditure growth due to built-in 'cost drivers' associated with public safety, as well as pay-for-performance and insurance for all employees." In English: Police and fire and EMS continue to eat ever larger portions of the overall budget, and if the city is to give even nominal (3.5%) raises to other employees as well as maintain their benefits – the money remains very tight. The planners are estimating roughly $27.5 million annually (on total budgets in the $475-520 million range) in increased costs over the next three budget years, even if nothing much is added. The bulk of that additional cost (more than $20 million) is directly in public safety, including maintaining current police officer staffing at 2.0 per 1,000 population, maintaining firefighter staffing, and providing contractually committed raises in pay for all public safety personnel.

Indeed, the eyebrow-raiser of the budget presentation was the percentage calculation of city spending on "public safety" – that category currently consumes roughly 99% of all property and sales tax revenues, and is expected to reach 113% next year. Just where does that 13% come from? From the public utility transfers (Austin Energy and Water Utility), without which much – indeed all – of what passes for other city services would go begging. Indeed, projected over the last decade, "public safety" – very narrowly defined – has moved from consuming about 52% of the entire city budget to a whopping 75% in 2005. (It's worth noting that this is a national trend, of course, and indeed international – with an empire resting on "national security," i.e., warfare, it's not surprising that everything else begins to fall off the table.)

The current bottom line is a projected budget that will be $4.9 million in deficit – before tentative "add-backs" in services, infrastructure, personnel, and even modest social services, add potentially another $8 million.

The news isn't all bad. Because of the bump in property values, the city could decide to stay at the "nominal" tax rate – currently 44.30 cents per $100 valuation – and thereby pick up an addition $6.9 million in revenue. An actual tax increase seems unlikely from this council, but since every winning council candidate supported some careful add-backs – library hours, pay raises, social services – it would appear the voters are willing to carry the additional weight. And faced with those increasingly curious budget proportions, the council told staff that it would like to move the public safety percentage of the budget down from 75% to 60% over the next three years, God and Carole Keeton Strayhorn (or Susan Combs?) willing. Let's see if they can do it.