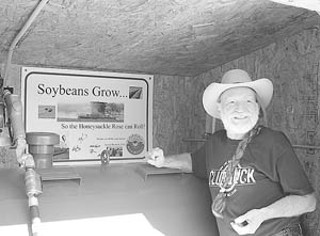 Willie fuels up his tour bus with his own 'BioWillie' fuel, a soy-based diesel. (Photo By Paul Galland)

Lately, biodiesel – a domestic, renewable fuel typically made from soybean oil or french fry grease and often blended with petroleum diesel – has made strides toward mainstream acceptance in Texas and nationwide. Country music legend Willie Nelson is selling it. Texas gubernatorial candidate Kinky Friedman has made it a campaign plank. And during a recent visit to a Virginia biodiesel plant, President Bush went so far as to say, "Biodiesel is one of our nation's most promising alternative fuel sources, and by developing biodiesel you're making this country less dependent on foreign oil." Just last week, the U.S. Senate passed an amendment calling for a renewable fuels standard requiring the use of 8 billion gallons of biofuels like ethanol and biodiesel by 2012.

Amid its growing popularity, however, the Texas biodiesel industry faces a brick wall. The fuel must be brought into compliance with a new Texas Commission on Environmental Quality emissions rule designed to limit smog and other pollutants, set to take effect Oct. 1. The Texas Low Emission Diesel rule, a 110-county initiative aimed at cleaning up some of the nation's worst air pollution in places like Beaumont, Dallas, Houston, and Galveston, requires diesel fuel sold in target counties to meet strict requirements designed to reduce multiple forms of toxic air pollution. The rule's main focus is the reduction of nitrogen oxides or NOx, one of the main ingredients in smog. NOx is also biodiesel's Achilles' heel. Compared to conventional diesel, biodiesel creates between 2% and 10% more NOx emissions.

"A lot of people aren't aware that diesel particulate emissions, also known as soot, in diesel exhaust are over seven times more toxic than all other air toxins combined," said Anne Johnson of Public Citizen, an organization that has rallied long and hard for a major cleanup of Texas' dirty diesels. "Biodiesel offers reduced particulate soot emissions. Biodiesel also results in essentially zero contributions to greenhouse gas carbon emissions because the creation and combustion of biodiesel cycles carbon from plants into the atmosphere and back into plant materials again." In fact, according to EPA data, biodiesel cuts emissions of nearly all regulated pollutants compared to conventional diesel. But because it doesn't cut NOx, it doesn't help to reduce the localized formation of smog and ozone that is choking Texas cities.

Industrywide hopes rest on the certification of an NOx-reducing additive. And unless the biodiesel industry can come up with a solution before Oct. 1, companies like local start-up Austin Biofuels will be marginalized, unable to expand sales of biodiesel blends in demand by municipal and commercial fleets. TxLED regulations stipulate that along with diesel, any alternative fuel blended with diesel must independently meet its stringent emissions standards. So although Austin Biofuels can continue selling B100 (100% biodiesel) after TxLED, the expanded commercial business they hope to develop – which includes sales of biodiesel blends like B20 (20% biodiesel, 80% conventional diesel) – depends on meeting TxLED regulations. Company co-founder Jeff Plowman is taking the challenge in stride, however. "TxLED is forcing biodiesel to step up to the plate scientifically," he said. "In the long run it's a good thing."

More than 500 national fleets use biodiesel, which is available at more than 400 retail fueling sites and from more than 1,400 distributors nationwide. Given rising oil prices and predictions from the oil industry that a peak in global oil production is near, the need for a domestic renewable fuel with near-term promise has never been greater. "There is no doubt that we are in troubling times and that oil is a finite resource on which we have allowed ourselves to become overdependent, even while other alternatives are available," Public Citizen's Johnson said. "Biodiesel is one of the many locally available energy options that we should be making a greater investment in to reduce our dependence on foreign energy sources."

Annual production has increased from 500,000 gallons in 1999 to 30 million gallons in 2004, making it the fastest growing alternative fuel in America. In Texas, the city of Denton completed in March a 3-million-gallon-capacity biodiesel plant, entirely powered by renewable landfill gas. And thanks to Austin Biofuels, biodiesel is gaining popularity locally. Now available in two locations, sales are steadily increasing. In addition to all-day Wednesday sales hours at their main location at 10012 Old Lockhart Rd. in Southeast Austin, ABF now has a retail outlet at Eco-Wise on 110 W. Elizabeth, just off South Congress.

Running errands in his Ford passenger van, which, of course, runs on biodiesel, Plowman explained how TxLED has turned the biodiesel industry on its head. "In the beginning we were all really freaked out that the TCEQ is putting us out of business. But the reality is that biodiesel will finally be able to compete on a level playing field." Confident that a National Biodiesel Board-funded effort to find a NOx-reducing additive will succeed in time, Plowman is optimistic that the post-TxLED biodiesel market will be promising. "We'll be able to sell to the city and to the state, increasing biodiesel's presence in the market." Texas is a precedent-setting case, he says, with the potential to foster the technology that will boost biodiesel to nationwide acceptance.