Nobody here but us lesbians 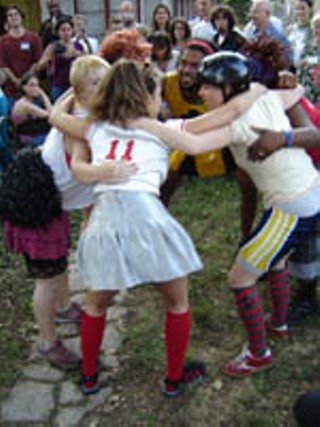 Lege Sine Die parties are curious affairs, with many motives: to celebrate a successful agenda, the end to business as usual, or to drink away the pain. Suffice it to say, once the Legislature blew out of town last Tuesday, there wasn't an unslaked thirst in the shadow of the Capitol.

Outside the Fort Worth Star-Telegram's soirée, Naked City lit a cigarette as Lt. Gov. David Dewhurst strolled outdoors, exuding his leathery charms. After some handshakes and platitudes, Dewhurst rounded the corner, preceded by an aide admonishing us not to smoke – who then abruptly returned with a request for a light. The Telegram's small Austin bureau was packed, and all abuzz about the brief appearance of Dewhurst, Tom Craddick, and Rick Perry – marveling that the Speaker and the Lite Guv standing side-by-side had not caused the universe to implode.

En route to the annual lobby-sponsored bash at the Austin Club, we met one of the good guys, Randall Ellis of the Lesbian/Gay Rights Lobby of Texas. Asked why LGRL was not throwing its own blowout, Ellis replied grimly that except for the demise of the infamous Robert Talton amendment aimed at keeping gays from foster parenting, there had been precious little to celebrate. If the Startlegram soirée had represented the Capitol's old guard, the Austin Club's to-do featured the bald-faced ambition of youth – Lege pages and committee clerks clogging the smoky halls in their trendiest club gear. "It's all bullshit," declared the anonymity-insistent author of the scathingly satirical blog known as www.pinkdome.com, holding court at the bar.

Indeed, numerous cheese sticks and margaritas later, Naked City's bullshit detector was registering cataclysmic readings, eventually driving us entirely out of the bar. However, the NC antennae picked up a juicy tidbit from the Continental Club wingding, where a middle-aged hipster in his form-hugging black glam was presiding over the back bar. Closer inspection revealed the man in black to be none other than the Pride of Victoria, Sen. Ken Armbrister, who leeringly asked our informant if she was a lesbian. When the response was affirmative, the Arm answered enthusiastically, "Me too!"

The next day was the ACLU's affair at the group's Eastside headquarters. Lacking the Austin Club's opulence, the free-speech advocates made up for it in pompoms. Yes, each guest was treated to a pair, and the evening's highlight was a "sexy" cheerleading performance lambasting Rep. Al Edward's notorious cheerleading-censorship bill. Among the amused bleacher bums: Austin Rep. Elliott Naishtat and City Council Place 3 candidate Jennifer Kim (opponent Margot Clarke, alas, had to leave before the pep rally).

It only happens every two years, God willing.