The city takes a small step toward racial reconciliation 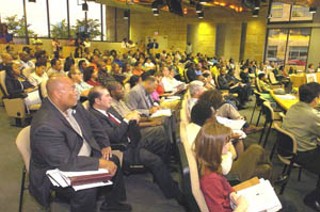 A full house heard the African-American Quality of Life Report to the City Council. (Photo By John Anderson)

Thus far, the best thing to come out of the ongoing public debate concerning the quality of life for African-Americans in Austin has been last week's City Council meeting. A multicultural but mostly black audience packed the council chambers – very few council meetings generate such broad public participation – and they stayed late, even through a couple of hours of inevitable delay over thorny zoning cases. And though the conversation was inconclusive – very much a work in progress – the overall consensus was that the city has taken an important step in the direction of better racial understanding, and perhaps toward a future that promises better conditions for Austin's black community.

All that remains is the hard work.

The crowd was on hand to hear the formal presentation of the results of the "African American Forums on Quality of Life," conducted in April by consultant Robena Jackson of Group Solutions RJW. The forums were sponsored by the city in the wake of the Midtown Live nightclub fire controversy and the coincident release of the city's own "African American Quality of Life Scorecard." Jackson was charged with reaching out to the city's black citizens in order to consider the black community's overall social, economic, and cultural situation in Austin, and, in the words of her report, to help determine "what local government could do to retain and attract African Americans so that the city maintained a diverse economy and culture."

Jackson reported that the forums had generated eight basic "areas of challenge": "a welcoming environment, arts and entertainment, police interactions, jobs, investment in East Austin, housing, education, and business and economic development." The categories are not equivalent in scope, some of them overlap, and in some cases – such as education – the city's role is primarily indirect. Still, the forums and a subsequent "solutions group" assembled a series of recommendations that touch on each category, with the specific intention of giving the city benchmarks to work toward over the next six months to two years.

2) Police interactions: We need better police training, clearer policies on the use of force and the de-escalation of force, and appropriate discipline for "problem officers."

3) Housing and commercial development: Build a comprehensive approach to problems like foreclosures and gentrification, create more investment in East Austin infrastructure, and find ways to sustain the established African-American residential and business community.

4) Education: Collaborate with AISD on facilities, programs, and mentoring.

5) Employment and economic development: These are the most extensive recommendations, running the gamut from more intensive business recruitment, tax credits for minority businesses, linking corporate incentives to minority hiring, reviewing the city's own hiring and compensation practices, promoting access to capital for African-American businesses, and improving information and assistance generally for small businesses.

6) Other recommendations: Establish a monitoring and review process on proposed changes, and include the larger community in plans and further actions.

Work to Be Done

As they stand, the recommendations are commonsensical, even predictable, and there were no delusions in the room that having set forth the problems, it would be an easy or straightforward matter to design and implement solutions. City Manager Toby Futrell introduced the subject by way of a slight ruse: She read a passage from a report describing the alienation of African-Americans from the larger Austin community, and noted, "Perhaps the broadest conclusion that can be drawn from our study is that race relations remain a serious problem in Austin, a finding that seems incongruent with Austin's image as a progressive, enlightened city with few social problems." Then Futrell pointed out that the citation was from a 5-year-old report on ethnic and racial relations in Austin: "Whatever we do here today," Futrell continued, "we need to make sure that we are not back here in five years with the same findings, and no progress."

On the whole, the evening's discussion carried an air of cautious optimism, a sense that whatever happens next, the city administration should be applauded for taking positive public steps to acknowledge the problems and attempt solutions. Several speakers complained that the forums, however helpful they may have been, were too tightly structured to allow much direct public input – at the audience's suggestion, the June 23 council meeting will include a public hearing to allow citizens to respond to the findings of the report. At that point, the council (including a couple of new members) is expected to develop an "action plan" to determine whether all this initial public conversation can serve to generate some progress for East Austin and the larger Austin African-American community.

It will not be easy. The report and several speakers mentioned vexed questions that won't be resolved by good intentions: For example, the Midtown Live funding issue that hasn't quite gone away, and behind and beneath it, the issue of how to convincingly address persistent problems of institutional and attitudinal racism in the APD. But this particular night at City Hall was devoted to the possibility that however bad things might be at the moment, if the community as a whole is determined and united, it can address the particular quality of life problems facing the African-American community – which is to say, of all of us.

NOKOA publisher and editor Akwasi Evans, a 30-year Austinite, expressed some of the qualified optimism of the occasion, as he acknowledged the occasional impulse to "get out of Dodge because Austin is so unfriendly" to African-Americans, and simultaneously his determination to stay on. "I'm stubborn and hardheaded, and I love Austin," Evans said. "I may complain about it, but I'm not going anywhere. I'm going to stay here and fight this fight until it's won, and I'm going to fight it with these good people, with the Urban League, the NAACP, the African-American Chamber of Commerce, and the good people who sit on the Austin City Council.

"Please do what we hope you will do," Evans concluded. "The right thing."