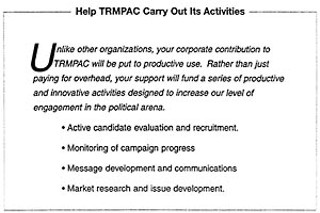 An excerpt from a TRMPAC mailer to corporate donors; by law, coporate donations may only be used for overhead.

If last week's court ruling is any indication, the most damning evidence against the Texans for a Republican Majority Political Action Committee was the PAC's own fundraising pitch to corporate donors. In the first of several pending decisions in the multifaceted money-in-politics dispute, state District Judge Joe Hart determined that TRMPAC – created as a state party-building arm of U.S. House Majority Leader Tom DeLay – violated state laws by failing to report more than $600,000 in corporate contributions.

The ruling, in a lawsuit brought by five defeated Democratic candidates, including former Austin state Rep. Ann Kitchen, turned in large measure on a single marketing tool produced in the group's early efforts leading up to the 2002 legislative races. In a fundraising pitch to potential corporate donors, TRMPAC promised that their dollars would go directly toward financing GOP campaign activity – "rather than just paying for overhead" – that is, administrative expenses.

Shortly after the election, then Speaker-elect Tom Craddick, whose rise to power was contingent on the success of TRMPAC, helped drive home the plaintiffs' case with his post-election thank-you letter to corporate donors. The speaker cheerfully noted that he and TRMPAC "lived up to our commitment not to use one cent of your personal contribution to cover administrative expenses." (Craddick is also at the center of a criminal investigation into TRMPAC's use of corporate dollars, but has not been indicted.)

Under Texas law, as it happens, covering administrative expenses is the only thing groups like TRMPAC are allowed to do with corporate (or union) money. Instead, TRMPAC had sought to apply a broad definition of "administrative expenses" to include fundraising, polling, meetings with candidates, direct mail, and political conferences. The group had also argued that there was no direct evidence that corporate donors contributed to TRMPAC with the "intent" of that money going toward illegal campaign activities. But here Hart drew from the PAC's own mission statement and other material to find, as he states, "overwhelming evidence from which the intent of the donors to TRMPAC can be fairly and reasonably inferred."

The judge set only modest damages, however, ordering TRMPAC treasurer Bill Ceverha to pay $196,600 to the five Democratic plaintiffs – including Kitchen – who lost to TRMPAC-backed candidates. Ceverha will appeal the ruling.

The plaintiffs' legal team – Joe Crews, Cris Feldman, and Dave Richards – built much of their case on a collection of TRMPAC letters, e-mails, and other documents designed to pull in six- and seven-figure contributions from some of the state's largest industry players. On the whole, the evidence provides a grim example of just how much influence corporate powerhouses can have on potential legislation. Note the e-mail exchange between Washington, D.C., fundraiser Warren Robold (one of three indicted in the criminal case against TRMPAC) and lobbyist Drew Maloney, DeLay's former chief of staff. Robold asks for potential corporate TRMPAC donors "with asbestos problems"; Maloney lists Dow Chemical, Owens-Illinois, and Halliburton. (Maloney also notes that he's collected "two checks from Reliant [Energy]," and "[w]ill deliver to TD next week." Presumably, "TD" is Tom DeLay, who continues to insist publicly that he had little or nothing to do with TRMPAC.)

The tort reform issue was a big drawing card for donors in the 2002 elections; the Legislature passed extensive tort reform in 2003 (including a constitutional amendment to limit damages), and this year passed a bill to curb asbestos litigation. Maloney, who helped raise money for TRMPAC ($25,000 apiece from Reliant Energy and Westar Energy), went on to secure a lobbying contract with the Texas Office of State-Federal Relations, an agency that Craddick oversees, along with Gov. Rick Perry and Lt. Gov. David Dewhurst.