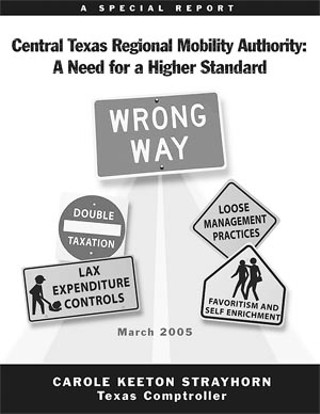 Comptroller Carole Keeton Strayhorn – never shy about expressing her opinion – produced this scathing audit of the CTRMA and made toll roads a potential 2006 gubernatorial issue. 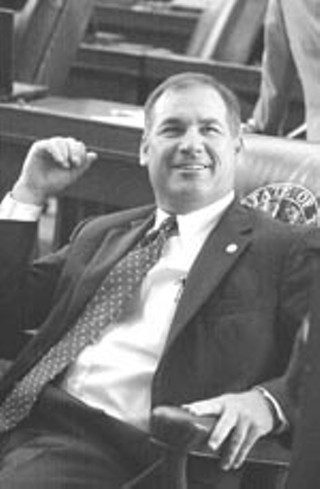 A Budget, We Got

Well, at least they got a budget out the door. The 2006-07 spending road map is the one piece of major legislation – and the only law that's constitutionally required – the House and Senate managed to hash out this session. Barring significant changes by the governor, and pending the comptroller's blessing, we're looking at a $139 billion spending plan that seeks to undo some of the damage done in 2003 to social services – the biggest victim of the state's $10 billion shortfall. The new bill includes $37.8 billion for Medicaid and adds $444 million to the Children's Health Insurance Program – still below what child welfare advocates had wanted. Budget writers did see fit to restore dental and benefits for CHIP, but they didn't right all of the wrongs from the 2003 session. With education funding still in limbo, teachers are left high and dry without a pay raise and without the restoration of the 2003 cuts to their health benefits. Other education matters – money for school facilities and teacher retirement – are up a creek as well, though state employees will see an across-the-board pay raise in the new biennium. The appropriations measure drew scorn from both sides, with the less-government folks at Texas Public Policy Foundation calling the budget too big and out of step with the fiscal sensibilities of good Republicans. – Amy Smith

The transportation clean-up bill this session, HB 2702, was salvaged on the last weekend after some intense midnight negotiations between House and Senate conferees.

Most Central Texans would consider toll roads – and the conversion of freeways to toll roads – to be the hot topic in HB 2702. But that was not the case. Instead, it was provisions concerning the Aircraft Pooling Board – inserted by Sen. Robert Duncan, R-Lubbock, and opposed by House Speaker Tom Craddick – that caused the biggest turbulence. Eminent domain also remained an outstanding issue. Toll road opponents this session found a friend in Comptroller Carole Keeton Strayhorn, who issued a scathing audit on the operations of the Central Texas Regional Mobility Authority and headlined an anti-toll rally on the south steps of the Capitol. She called Gov. Rick Perry's Trans-Texas Corridor plan "the largest land grab in Texas history" and dubbed the state's massive transportation plan the "Trans-Texas Catastrophe." Perry struck back, pointing to Strayhorn's support of toll roads in her 2001 audit of TxDOT.

The governor touted the transportation bill's "no freeway conversion without a vote" as one of his accomplishments of the session. Other provisions in the bill give local governments, and not private contractors, the ability to regulate toll rates, and give property owners more ability to share in the profits parlayed from any future toll road project. Sen. Gonzalo Barrientos, D-Austin, managed to insert language that would also give more latitude to funding projects such as the relocation of the Union Pacific railroad line off the MoPac corridor.

Other transportation legislation passed this session put ethics requirements on regional mobility authority officials, but a bill to slow down the rollout of the Trans-Texas Corridor never made it out of committee. – Kimberly Reeves

For once, wealthy landowners didn't get their money's worth on a bill that sought to water down Austin's Save Our Springs Ordinance and stifle ongoing regional planning efforts. On its face, HB 2833, sponsored by Eagle Lake Democrat Robby Cook but authored by the developer lobby, called for public subsidies of landowners – they would call it compensation, of course – under the state's so-called "takings" law. Austin Rep. Eddie Rodriguez scuttled the bill – twice – on technicalities but, like most bad bills, this one just kept coming back, until it finally passed out of the House in a truncated form, aimed only at Central Texas. But the legislation met its demise in the Senate in the session's final days, in part thanks to a threatened filibuster by Austin Sen. Gonzalo Barrientos. The bill's supporters, packaged as the Landowners' Conservancy of Texas, included landowners, developers, lawyers, Agriculture Commissioner (and state comptroller hopeful) Susan Combs, and our very own former Mayor Bruce Todd. – A.S.

Campaign Finance: How Clear Is It?

Despite strong bipartisan support, a bill that would have strengthened existing campaign finance laws – indeed, it clarified headline issues concerning permitted expenditures – was killed off in committee. HB 1348 sought to add teeth to the current ban on corporate and union money in political campaigns. It was in direct response to what occurred in the 2002 legislative races, with many GOP candidates owing their victories to huge amounts of undisclosed corporate donations. The bill's demise shouldn't have come as that much of a shock, given the stacked votes on the House Elections Committee, where it had remained hostage for most of the session. A few legislators made a rescue attempt to get the bill onto the House floor for a vote, but were beaten back with a loud admonition from Austin Rep. Terry Keel, on the curious grounds of "respecting the process." Whose process? A similar bill died in the Senate. – A.S.

The session's telecommunications deregulation bill, which was embattled on the airwaves as well as in the Capitol corridors, went down in flames in the last days of the session. The House, led by Rep. Phil King, R-Weatherford, proposed a broad deregulation of the telecom industry, including the granting of statewide cable licenses and the deregulation of basic phone rates set by the state's major telephone carriers. The bill raised some opposition because it also proposed to limit free municipal Wi-Fi access. Sen. Troy Fraser, R-Horseshoe Bay, proposed a more cautious dereg rollout, with the Public Utility Commission taking a more active role in the process in the suburban and rural markets. Opponents pegged King's bill the "SBC bill." (SBC retained 124 lobbyists to work the telecom bill, among others, this session, at a cost of more than $3 million.) King begged to differ, saying that the bill would benefit smaller companies like San Marcos-based Grande Communications as much as it would the larger telecom carriers. King said letting the bill "slip through our fingers" cost the state millions of dollars in economic development. Already, industry publications are reporting that the state's dereg matter is expected to re-emerge on a federal level. One blog, Save Muni Wireless, reports that U.S. Rep. Pete Sessions has filed legislation to block free muni wi-fi nationwide. Sessions also just happens to be a former district marketing manager for SBC. – K.R.