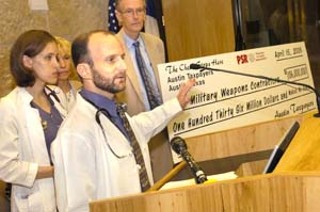 Austin members of Physicians for Social Responsibility were joined by City Council Members Jackie Goodman and Daryl Slusher on Monday in a symbolic action designed to call attention to the wastefulness of the U.S. military budget and its damaging effect on national and local priorities. The doctors from PSR presented the city officials with a symbolic check for $136 million, representing Austin taxpayers' share of the estimated $53 billion allocated for unnecessary military programs, including nuclear weapons and Star Wars missile defense, according to a budget task force. The group urged the Texas congressional delegation to oppose the new generation of military weapons proposed in the Bush administration's 2006 budget (to be debated in the U.S. House beginning this week) and to support nonmilitary security tools like state and local emergency preparedness and renewable energy initiatives. "We urge our representatives in Congress to vote for a defense budget that invests more in preventing than in fighting wars," said Greg Sheff, M.D., a board member of Austin PSR.

According to the budget analysis by the Center for Defense Information ("A Unified Security Budget for the United States, 2006"), the Bush budget "would spend seven times as much on the military as on homeland security and all other forms of nonmilitary security programs combined." Yet it does not include current funding for the wars in Afghanistan and Iraq, which brings the ratio to 9-to-1. According to the National Priorities Project, Austin's share of the war in Iraq alone is now at $526.5 million (www.nationalpriorities.org).

Goodman and Slusher reiterated the doctors' statement of priorities, pointing out that local budget decisions are made increasingly difficult by the financial pressures created by the U.S. military budget. Slusher cited former Presidents Dwight Eisenhower and Harry Truman for their scrutiny of defense spending, and said, "Cities are struggling to pay for basic services like police, fire, EMS, parks, libraries, and social programs. At the same time, federal budget cuts pass costs down to the cities. The federal government should invest much more of Americans' tax dollars into these essential services and less into wasteful military spending that benefits huge corporations more than average American citizens."

"The federal government should be reinvesting our tax dollars into helping our communities, our states, and our country," concluded Austin PSR President Lisa Doggett (daughter of Austin Rep. Lloyd Doggett), "not developing macho military programs that fail to make us safer." 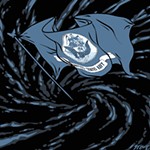 Letters at 3AM: Why Not Chicken Fat?
The most important political question of our time: Who benefits from military spending?