Reining in the Mother of All Big Boxes 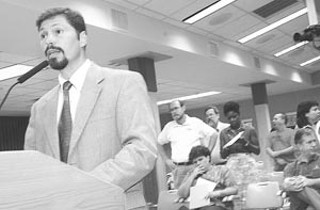 Wal-Mart has set its sights on Austin in a big way. There are 10 in the greater Austin area so far, plus one about to open and one in the approval process. And with few exceptions, the retail demigod has plopped a big box down at every location of its choice since first coming to the area in 1988, whether neighbors approved or not.

Not anymore … maybe. A coalition of community groups, labor, and environmental organizations has launched a campaign to bring about city code changes to directly address big-box development. Last year, when a city-funded study on big-box development downplayed damage to local business and focused its recommendations on building design standards, dismayed local organizations commissioned their own independent study. The findings of this study, commissioned by Liveable City, Austin Full Circle, Austin Independent Business Alliance, and the American Federation of State, County, and Municipal Employees local 1624, became the basis for the code change recommendations, which were announced at City Hall last week. The proposed changes focus on two areas – expanding the notification area for big-box developments, and assessing a project's environmental and economic impact prior to approval.

The recommendations come on the heels of a major defeat in the latest battle over a new Wal-Mart, this time a 203,000-square-foot Supercenter on FM 620 in the Four Points area. The fray over the Supercenter originated when nearby residents, who fell outside the city's required 300-foot notice area, claimed they were excluded from the Zoning and Platting Commission's environmental variance process. The situation was exacerbated when the variance was approved at a public hearing that neighborhood and community opponents mistakenly believed had been postponed.

One proposed code change seeks to expand the notice area beyond 300 feet. The second and more critical change, according to coalition members, calls for conditional use permits for big-box projects based on a mandatory impact analysis to determine the development's cost to the community. The analysis would examine impacts on local businesses, adjacent neighborhoods, and the environment, as well as costs associated with city infrastructure and services, and costs for health care and housing if projected job salaries don't meet the area cost of living. Only projects that showed a net benefit to the community would be approved. Proponents point to Los Angeles, which became the largest U.S. city to enact a similar ordinance last fall.

The push for development code changes in Austin is a front-line offensive in a much larger effort to halt the cycle of abuses for which critics say Wal-Mart has become notorious. "Wal-Mart is the poster child for what's wrong with corporate America," said Louis Malfaro, president of the Austin Central Labor Council. He cited the coalition's independent study, which estimates that each Wal-Mart store costs taxpayers more than $400,000 per year in subsidies for poorly paid, uninsured workers who can't afford health and child care, housing, and even food. According to Texas Health and Human Services Commission data, 4,339 children of Wal-Mart workers were enrolled in the state's Children's Health Insurance Program for low-income kids in February 2005, three times more than the second highest-ranking employer on the list. On the environmental front, Wal-Mart was handed a $3.1 million fine for Clean Water Act violations in May of last year, the largest civil penalty ever assessed for environmental damages. Before that, they had already been fined $1 million in 2000 for virtually identical charges.

The $10-billion profit Wal-Mart chalked up in 2004, however, speaks to the fact that its stores have fans, regardless of the corporation's reputation. Even union members, whose attempts to organize within stores have been about as welcomed by management as a plague of locusts, use their credit cards at Wal-Mart more than any other location, according to Malfaro. And as reported in the Statesman, 5,000 people applied for the 427 jobs available at the new Slaughter Lane store.

So how do you convince big-box lovers that their favorite store isn't always a good corporate citizen and needs to be reined in? Robin Rather, a founding member of Austin Full Circle and a Liveable City board chair, tried putting the proposed policy changes into a larger context. "We're not suggesting a ban on big box. We are not saying don't shop at big boxes. We are simply asking these national big-box employers to carry their own weight and to stop passing their costs on to local taxpayers," Rather said. While it's important to have name-brand products at affordable prices, she says, "I don't think most people understand the global, national, or even local implication of how Wal-Mart gets to its low, low prices. It shouldn't mean that someone in China gets 10 cents per day or that an American should be working for slave labor with no benefits." The proposed code changes would provide a medium through which people could start asking tough questions about big boxes' costs to communities, Rather said.

Wal-Mart's man in Austin, attorney Richard Suttle, has represented the retailer in most of its recent local battles. "I don't believe all the bad stuff that's out there," he said. "Wal-Mart's the biggest retailer in the world. They're not perfect and they'll have people taking shots at them." An old hand at the inner workings of Austin's land development code, Suttle says the system works as is, "but I never have a closed mind." He also says that generating more neighborhood and community involvement in the development process by having larger notice areas would be beneficial, but says the conditional use requirements are "too subjective," especially the economic indicators.

Of course, City Council would have to approve any code changes. Council Member-elect Lee Leffingwell, a veteran of the city Environmental Board, the body that advises the Zoning and Platting Commission on environmental variance applications like that of the FM 620 Supercenter, said he needs to hear more from all parties before he can come to any conclusions. "I'm in favor of all companies paying a decent salary and benefits, but I'm hesitant to commit until I hear arguments on both sides," he said. Austin @ Large: Austin at Large
The Big-Box Toolbox: What Can Austin Do to Combat the Powercenter Plague? More Than You might Think.