City looks to future in wake of Texas Relays controversy

"[We need] not to talk about problems, but to talk about the future, especially in light of the recent quality-of-life forums." – Donell Creech (Photo By Jana Birchum)

According to real estate agent and party promoter Byron Davis, the days of the organized afterparties on East Sixth Street during the annual Texas Relays are over.

Davis is a member of the Firm Austin, which since 1997 has organized and promoted parties and networking events for Austin's young, black professionals – including annual Relays afterparties, the promoters' signature event. This year, the group organized two events at East Sixth Street venues, which combined were expected to attract nearly 1,000 attendees. But things did not go as planned; according to Davis and fellow Firm promoter J.R. Richardson, Austin Fire Department fire marshals "intimidated" the club owners into keeping occupancy levels lower than the promoters expected, resulting in long lines of people who could not get into the parties; yet, inside, they say, the clubs were nearly empty. Additionally, they say there appeared to be so many police on the street and outside the party venues – hanging around, "waiting for something to happen," Richardson says – that partygoers were intimidated. "[T]he club owners on and around 6th Street were intimidated by the city to 'strictly' adhere to fire code capacity during the Texas Relays weekend," reads a letter the Firm has posted on its Web site (www.thefirmaustin.com). "Because of this threatening environment and excessive police presence during the relays weekend on 6th Street, many club owners/managers did not allow most of our guests to enter their establishments," the open letter continues. "[W]e got the point. We are not welcomed on 6th Street."

According to an April 9 report in the Statesman, similar complaints of racially motivated restrictions provoked the cancellation of Relays-related events (sponsored by different promoters) at the downtown Hilton. Hilton management strongly rejected the charges, saying the cancellation was simply the result of a contractual dispute.

The allegations by the Firm promoters surprised AFD Battalion Chief Don Smith and APD Assistant Chief Robert Dahlstrom, who says that he thought the weekend was a glowing success. "It was one of the best events I've ever been to," he said. "Not just on the police side, but on the crowd side, too." Indeed, although there were more than 60,000 people on Sixth Street each night that weekend, police made a total of just 10 arrests. Moreover, Dahlstrom said that given "what's been going on politically" with the African-American community and the quality-of-life forums sponsored by the city, the police made a concerted effort to be welcoming. Dahlstrom said he thought it had worked, and "was extremely upset [by the Firm's] allegations."

While what happened Downtown – or didn't – during Texas Relays weekend may be a matter of perception, the Firm's allegations have tapped into the heart of the ongoing discussions about the quality of life for Austin's African-Americans. More significantly, the Relays controversy could provide an avenue for city officials and stakeholders to begin creating an environment that nurtures a vibrant black social scene. "I want [the Relays] to be a huge success, and the city does, too," said Assistant City Manager Rudy Garza, "and I think [the city] can help."

In March, the city presented the results of its African-American Community Scorecard, a demographic survey that found, among other things, that Austin simply isn't "on the map" of places that appeal to young black professionals. In part, the reason is that Austin does not have (nor has it encouraged) a "vibrant, sort of happening, scene," concluded city demographer Ryan Robinson. Creating a scene is exactly what the Firm and other promoters have been trying to do, said Davis, but it hasn't been easy, especially Downtown, and specifically on Sixth Street, the heart of Austin's entertainment district. There are few black-owned businesses Downtown, said Richardson (who works for Dell and served as a panelist on the African-American quality-of-life forum for entrepreneurs and artists), and, significantly, there are no black-owned clubs on Sixth Street. To make matters worse, he said, the club owners do not cater to or even welcome black patrons – a problem that is exacerbated during Texas Relays weekend, which brings so many African-Americans to town. "We are pretty much a diverse city, but when you go Downtown how much of that do you see?" Richardson asks.

Over the last decade, the Relays have grown into more than just a showcase of high school, college, and professional track and field prowess; the event has become a premier social destination for African-Americans, one that generates at least $7.5 million in revenue for city businesses, according to the Austin Convention & Visitors Bureau. The Firm dates its "Main Event" party planning to 1997, when it sponsored its first gathering at the DoubleTree Hotel. The club events have been held for seven years.

But as the Relays-related social scene has grown, so have the problems, say Richardson and Davis. Finding a host venue has become more difficult, and the costs and terms of the venue contracts have raised expenses. Add in what Richardson and Davis describe as an overwhelming police presence on Sixth Street, the perception is that Downtown Austin is not interested in playing host to majority-minority social events. The only solution Davis sees is to quit doing business Downtown. "They are making it so prohibitive, that [these events] are not going to happen down there in the future," he said. "I don't care what anyone says; it is a systematic way of getting rid of these events on Sixth Street. And as far as I am concerned, they've done it."

That is not what Garza wants to see happen; in fact, he said he'd like to see the Texas Relays social scene grow. He insists that the Firm's allegations of intimidation by APD and AFD are simply not true. APD had 70 officers working Downtown during the Relays – far fewer than the 200 on duty during Mardi Gras or Halloween – and the number of arrests was well below that of even an ordinary weekend. Still, Garza says, there are "a handful of people who are continuing to make these false allegations."

During the week following the Relays, Garza and Assistant City Manager Michael McDonald met with Donell Creech – a founding member of the Firm (he left it in 2002) and the creator of SoulCiti.com (a news and cultural information Web site for Austin's African-American community) – to discuss the future of the Relays afterparties and to address the Firm's allegations. Neither Davis nor Richardson attended the meeting, nor did they request one of their own. "Nothing is going to change because of a meeting," Davis said, adding that he isn't interested in "buying in, because that just lets the city off the hook."

But Creech doesn't see it that way. He said that he requested the post-Relays meeting "not to talk about problems, but to talk about the future, especially in light of the recent quality-of-life forums." (The results of the forums are scheduled for a Council briefing today, Thursday.) The key to creating a vibrant black community is participation, he said, and staying focused on solutions. Indeed, Creech said he was given a copy of the Firm's letter before it was posted, and suggested that they not post it, primarily because it relied too heavily on anecdotes and failed to offer any "concrete steps" to help make things better – like urging readers to participate in the forums.

While Creech agrees that the future of the Relays parties is on a "precarious perch," he said that is primarily because there is no one entity in charge of organizing and promoting the weekend (the afterparties have no official connection to the track and field meet) or to work with the city, in the way South by Southwest or Austin City Limits Music Festival organizers do. With a little tweaking and cooperation, Creech said, he thinks the Relays could become a nationally known festival, akin to the annual Essence Music Festival in New Orleans. And the Relays could become a way to "market Austin to African-Americans nationwide," he said. "It can become bigger, and better, than it already is." 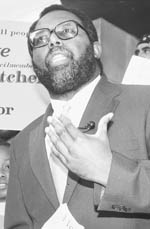 Engineering Quality – and Equality
The African-American Quality of Life plan gets aired out; NAACP unsatisfied