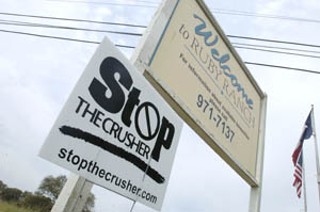 Hays Co. residents are increasingly voicing their opposition to a limestone quarry and crushing facility that's now operating within a half mile of an affluent county neighborhood. Last Friday, area residents congregated along RM 967 near Buda to protest the quarry. And at a town-hall-style meeting in Buda a few weeks ago nearly 300 people aired complaints ranging from noise and air pollution to the crusher's location atop the Edwards Aquifer Recharge Zone, as well as safety concerns about the heavy 18-wheeler traffic neighbors say the facility brings daily to the area's rural, two-lane roads.

The big rub for neighbors is the crusher's impact on their quality of life. Dick Schneider, Buda Chamber of Commerce president and founder of NOPE (Neighbors Organized to Protect the Environment) lives in the Ruby Ranch subdivision, which borders the crusher. He alleges that deceptive practices by the landowner who profited from Ruby Ranch's development are primarily to blame for the controversy. "It was relayed to us in general terms that this would remain pristine land. Many people bought property here and built their dream homes, then [the landowner] turns around and leases land to a rock quarry."

Jim Ruby, the original owner of the Ruby Ranch subdivision land and current owner of the quarry property, could not be reached for comment. But his son, Jim Ruby Jr., who happens to manage the quarry and crusher facility for operators KBDJ LP, said that he and his father have no comment.

The quarry itself, operated by Austin-based KDBJ (aka Industrial Asphalt), has been working at limited capacity since it opened last fall because several of its required permits are still pending. One of those is a Texas Commission on Environmental Quality air quality permit that neighbors have challenged; the first of two contested case hearings for the permit is on May 16. Neighbors also have a lawsuit pending against TCEQ over the quarry's water pollution abatement plan, which neighbors say was approved against TCEQ's own guidelines.

KBDJ spokeswoman Kirsten Voinis said the quarry and crushing facility has to follow stringent state guidelines and pass inspections. "And it passed each inspection by both the TCEQ and the Federal Mine Safety and Health Administration," she said. "We've taken steps above and beyond what's required of us to keep the Edwards Aquifer unpolluted, like trucking in water purchased from the LCRA and voluntarily lining ponds beneath the crushing facility to capture water and prevent seepage."

Overall, she said, while "we can certainly understand the 'not in my back yard' argument, we are operating within TCEQ guidelines, and neighbors haven't filed any noise or emissions complaints with the TCEQ or any other regulatory agency."

The Save Our Springs Alliance's Colin Clark attended last week's meeting and said the quarry represents a double whammy threat to the aquifer due to its water use and resulting runoff. Observers suspect that KBDJ is using the Edwards Aquifer to supply the massive amounts of water needed to operate the quarry's crusher, which must be continually sprayed during use. The sediment runoff created in the process adds pollution to the aquifer and will eventually surface at Barton Springs, Clark says.

Hays Co. Commissioner Susie Carter emerged as one of the more vocal critics of the crusher at the meeting, but put the neighbors' complaints in perspective by noting that the area's haphazard, sprawl development is as much to blame for the controversy as any other factor. "Rapid unmitigated growth is not a benefit to the community," she said. "We must manage growth through strict regulations on development. If we don't, we'll continue to see residents' lives disturbed."

Legislators have introduced two pieces of legislation this session that relate to the quarry. Senate Bill 142 strengthens county control over land development regulations, while SB 785 stiffens state safety and environmental requirements for rock crushers and quarries.