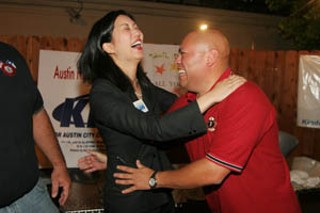 "This is a sad day for Austin's live music scene. It isn't going to be the same free and tolerant society that we all fell in love with." – John Wickham, owner of Elysium, after the smoking ban passed.

• Election results: Lee Leffingwell will replace outgoing Daryl Slusher in Austin City Council Place 1, Betty Dunkerley was re-elected in Place 4, and Margot Clarke will face Jennifer Kim in a run-off to replace Jackie Goodman in Place 3. A stricter version of the anti-smoking ordinance passed, and all Austinites are now taxable by Austin Community College. For a full election report, see election coverage.

• Fat lot of good it did us to pass the (tobacco) smoking ban – our annual dose of smoke from agricultural burning down in Mexico has made its way into Texas. Cough, cough.

• Attempts by Houston state Rep. Al Edwards to ban "sexy cheerleading" have now been mocked by the nation's two funniest sources of political humor, The Onion newspaper and television's The Daily Show. The latter included Edwards getting a lap dance from Daily Show "reporter" Bob Wiltfong.

• MTV's The Real World has finished filming in Austin and left town. Some of us at Naked City are too cynical to care; the rest of us are too old.

• New hand-held computers with an eye toward improved methods for counting diverse and unconventional households will be tested in Austin by the U.S. Census Bureau starting this summer. A broad portion of Travis County has been selected as a test site because of its "rapidly growing and diverse population and variety of housing," according to a Census Bureau press release. College dormitories, nursing homes, correctional facilities, and similar living situations will be given special attention, as well as non-English speaking populations and recent immigrants. Special emphasis on these hard-to-enumerate populations, along with a campaign to encourage participation, will enable the Census to fine-tune their process and eventual results. All Census data is confidential, and no person or organization outside the Census Bureau has access to gathered information. Travis Co. residents interested in temporary Census gathering work should contact the Austin Local Census Office at 888/814-6711. – Belinda Acosta

• Three East Austin/African-American properties were recently added to the National Register of Historic Places. The Teachers State Association of Texas Building at 1191 Navasota, the George Washington Carver Library at 1165 Angelina, and the Limerick-Frazier House at 810 E. 13th are now protected from the potential impacts of federally funded projects, such as highway construction, and are eligible for federal restoration and preservation grants. "It affords the state an opportunity to make sure that good preservation practices are followed," said Gregory Smith, national register coordinator for the Texas Historical Commission, of the classification. From 1952 to 1966, the TSAT Building was headquarters of the teachers association, which was central to Texas' school desegregation struggle, as well as to efforts to gain equal rights and wages for African-American educators. The George Washington Carver Library, the city's first branch library for African-Americans in 1933, now houses the George Washington Carver Museum. And by the 1930s, the Limerick-Frazier House functioned as a lodging place for black students and travelers during the Jim Crow era. There are more than 2,000 Texas locations included in the National Historic Register – C.S.

Robert Redford addresses members of SOS Alliance, Liveable City, and the press at Barton Springs on Saturday. The actor flew in from his ranch in Utah (not, he made clear, from Hollywood) to join local environmental groups in asking Advanced Micro Devices not to move 2,000 employees to a new headquarters in the Barton Springs watershed. The soft-spoken actor explained that his family has roots in San Marcos going back to the 1800s, and fondly recalled childhood trips to the springs with his grandfather. (He recalled the springs' 68-degree water somewhat less fondly.) Redford said that the AMD issue isn't one of "Don't touch a thing" vs. "Develop everything" but one of balance. The onetime Sundance Kid also hobnobbed with a group of theatre students from Paredes Middle School (some of whom had even seen some of his movies and all of whom thought that saving the springs was a good idea), and compared the groups asking AMD to move – Save Our Springs Alliance, Liveable City, Save Barton Creek Association, Austin Neighborhoods Council, and the local Sierra Club – to the defenders of the Alamo. "Fight to save the fort," he said. – Rachel Proctor May (Photo By John Anderson)

• Travis Co. Hospital District board Chair Clarke Heidrick was honored this week with the first annual Neal Kocurek Award for Health Care Advocacy. The Austin attorney – who led the legislative effort to create the district and later the campaign to win voter approval in 2004 – received the award Monday at the annual luncheon of the People's Community Clinic. In presenting the honor, People's board member and former state Rep. Ann Kitchen called Heidrick "the glue that kept everyone marching forward, in his own good-humored, even-tempered, determined way. He is approachable, he listens, and he leads with unshakable integrity." Heidrick was also recognized for his work with the Shivers Cancer Foundation and as past chair of the United Way. The annual award is aptly named after civic leader and longtime health care advocate Neal Kocurek, who died unexpectedly last year. – Amy Smith

• After three months of debate, the AISD board of trustees approved a prevailing wage scale that included a $1.36/hour supplement for health insurance. The scale sets a minimum rate that contractors bidding on AISD construction jobs must pay their workers. Unionized workers, like ironworkers and electricians, had hoped the district would adopt a wage scale that reflected market average benefits, which in their trades tend to be significantly higher than the $1.36. The supplement, however, is a windfall to workers in less-skilled trades, such as drywallers; very few of them currently receive benefits. While the battle over benefits has been contentious, at Monday's meeting the workers thanked the administration, which had previously insisted that paying for any sort of benefits would break the bank, for its "progress." "As one school board member said to me, we didn't hit a home run, but we hit a double," said Michael Murphy of the electrician's union. – Rachel Proctor May

• Those of you who have difficulty coping with change, brace yourselves. Travis County has switched to new vehicle registration stickers. More detailed than the old ones, the new stickers include the last eight digits of the vehicle identification number, the license plate number, county of registration, and registration month and year. The change is part of a TxDOT effort to reduce state auto theft numbers – the rationale being that personalized stickers will deter thieves from peeling them off other people's vehicles and putting them on their own. Another curve ball: The waxy sheet on which the sticker comes is now actually covered with two stickers: one that's usable and one that says "void." That's because there are two classes of vehicle stickers – license plate ones for motorcycles and trailers, and window ones for cars, trucks, etc. Ignore the "void" sticker. That's the one that doesn't apply to your vehicle. One last change: no getting new stickers at most grocery stores any more. According to a county press release, "Some 17 locations have decided to shut down the service, including all Albertsons and Randalls grocery stores. Most based their decision upon the cost of leasing TxDOT equipment, which runs $600 per year." – C.S.

• Travis Co. commissioners find themselves in a quandary over how to handle the erosion along Walnut Creek in houses that back up to the creek just southeast of the intersection of U.S. 290 and U.S. 183. Many residents of homes in the small, moderate-income neighborhoods that back up to Walnut Creek, which straddles the city/county line, have seen huge chunks of their back yards drop into the creek. The county intended to use a settlement with local landfills to pay for repairs, but now say the needs will far exceed the $100,000 set aside in the settlement. Environmental Officer John Kuhl now faces the task of gathering a coalition of the city, county, and Army Corps of Engineers to try to address what has been a chronic problem for the area. Solutions could include either shoring up the creek or buying out the neighbors. – Kimberly Reeves

• An international AIDS candlelight memorial service, "Turning Remembrance Into Action" – with prayer, song, music, poems, and candles lit in the memory of those gone to death – will be held on Sunday, May 15, 8-9pm at Republic Square, 422 Guadalupe. Mayor Will Wynn will officiate, and Congressman Lloyd Doggett will be in attendance. For more info, call 477-1566.

• With the vote count still cooling, the Metropolitan Breakfast Club isn't wasting any time. A forum for the City Council Place 3 runoff candidates – now determined to be Margot Clarke and Jennifer Kim – is scheduled for Wednesday, May 18, 7-8:30am. Breakfast meetings are held at the UT Club, Sixth Floor of Darrell Royal Memorial Stadium. Admission is $15; RSVP for confirmation and more info, Katherine Deats, 479-9460 or mbcaustin@austin.org.

• The Austin Police Department's North Central Area Command is gearing up for the third project in the ongoing, award-winning Operation Restore Hope neighborhood clean-up campaign. ORH will take place on Hearthstone, Hearthside, and Fireside Drives (south of 183 and east of Burnet Road) on May 21, beginning at 8am. (For more on ORH, see "North Central Blues," May 7, 2004.) For more info, call 974-5722.