ACC Expands Its Base

As expected, the Austin Community College annexation election was a runaway success for the college. Nearly 80% of Austin voters approved levying ACC taxes on the roughly 10% of Austin residents who don't currently pay them (i.e., those who live in Austin but who are in Eanes, Round Rock, or Pflugerville ISDs). When the election was announced, residents of those areas cried foul – usually, only people who will be affected by a proposed tax increase are allowed to vote on it, for obvious reasons. But since state law allows whole-city annexations (and a bill in the legislature may soon make the practice illegal), ACC took advantage of the opportunity. To the college, it's only fair to ask all of Austin to support an institution that will train a majority of the region's future workforce. "The annexation will help us provide more services and quality programs to students, industry, and the community," interim president Steve Kinslow said in a statement. – Rachel Proctor May

The city sent out a press release extolling our shiny new City Hall as "Austin's newest community gathering place" and encouraging citizens to gather there to watch election results on Saturday. Issuing the release only two days before the election was a tad late in the game to get the word out, however. As time for the 10 o'clock news approached, Margot Clarke and entourage piled into their cars to head down to the "community gathering," only to turn around within seconds, after a cell phone call informed them it would be a waste of time. Back at Clarke's election party at Threadgill's North, supporters watched a News 8 Austin reporter – with an empty city hall behind her – declare that there had been "a lot of high hopes that this will become an election destination." The room exploded with laughter. – Lee Nichols

Round Rock: Not So Sensible

The vitriolic Round Rock ISD school board election ended in something of a draw, as just one candidate on the three-member slate out to "take over the school board" won a position on the seven-member board. After more than 60% of voters shot down the district's $349 million bond package in March, many expected an easy takeover by the so-called "Sensible Ticket," who opposed the big bond. But of the three, only Place 1 candidate Vivian Sullivan (who made the "take over" comment) won a seat, earning just under 40% of the vote as candidates Karla Sartin and Yvette Sanchez split the non-Sensible vote almost evenly. In Place 3, Diane Cox won with 45% of the vote – and just 90 votes more than anti-bond candidate Debbie Bruce-Julke, who may ask for a recount. And in Place 6, veteran trustee Raymond Hartfield won with 48% of the vote, while remaining votes fell two-to-one in favor of anti-bond candidate Dan McFaull.

Sullivan is expected to join sitting trustee Elizabeth Elleson in standing firm for low taxes as the group puts together a new bond package, hires a superintendent, and adjusts boundaries. – Rachel Proctor May 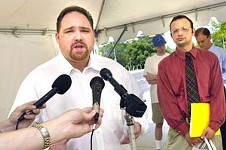 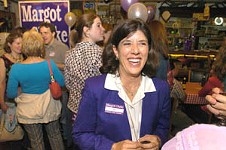