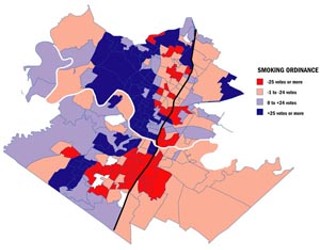 Is this what the much-vaunted realignment of Austin politics looks like? In both of the marquee contests on last week's ballot – the Place 3 race and the smoking ordinance – Austin voters turned in results notably different from the straight-up city vs. suburbs dynamic of prior years. The details:

Well, this much hasn't changed; as usual, voters in the Northwest and the Birkenstock Belt made up just shy of half the total electorate. Actually, compared to recent municipals, this was high turnout even for Central Austin, and slightly lower than expected in the Southwest.

As has been widely noted, the smoking ordinance clearly increased turnout, with about one in six voters not bothering to voice their choices in the Council races. Which side were they on? Well, more than 60% of these votes citywide were cast in boxes that went for the smoking ban, which makes it reasonable to guess that new, pro-ordinance voters made the difference. As the map shows, the Tobacco Frontier lies pretty close to Lamar Blvd. Furthermore, one could make this the official Keep Austin Weird map, noting the concentrations of anti-ban sentiment in Central East Austin, south of Oltorf, and north of 51st, or the disjunction between strongly pro-ban Travis Heights and Cherrywood, and their anti-ban neighbors in Bouldin or Windsor Park. Discuss amongst yourselves. 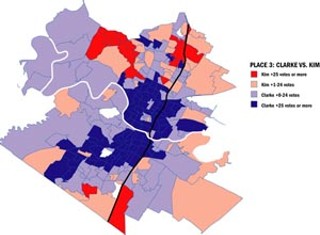 Lee Leffingwell and Betty Dunkerley had little trouble anywhere, but their opponents provided more than just token resistance. Toll Party poster child Casey Walker, unsurprisingly, made a real showing in the Southwest, while Andrew Bucknall picked up extra votes east of the highway. (As did the redoubtable Jennifer Gale.) Notably, Dunkerley did best this time in parts of town where she lagged in 2002. The smoking ban impacted Dunkerley the most out of all the candidates, with a citywide swing of nearly 12% between her results in pro-ban and anti-ban boxes.

So, did Jennifer Kim win, or did Gregg Knaupe lose? Only their consultants know for sure, but in the race to be the designated anti-Clarke, signs point to the latter. Even in his best turf – the Northwest and Southwest – Knaupe did little better than keep up with Kim, and her six-point lead in Central Austin put the kibosh on Knaupe's electoral plans. (The urban core provided both Clarke and Kim with their largest chunks of the total vote.) If anything, Knaupe took votes away from Clarke, rather than Kim – Margot's swing between Knaupe's stronger and weaker boxes is an alarming 15.2 points – which leaves something to be desired as a strategy to get into a run-off. Having said that, Clarke's lead going forward is pretty daunting. As the map shows, her strongest boxes (relative to Kim) stretch far beyond her urban-core base into the (anti-toll-road) suburbs. Citywide, however, Clarke's performance was generally unrelated to the strength of the anti-toll vote, and her performance was likewise fairly immune to influence by the smoking-ban vote, or to turnout variations in general. – Mike Clark-Madison NOTES: As usual, the geographic breakdown is by House district: C=D49, E=D46, NE=D50, NW=D48, SE=D51, SW=D47. Williamson Co. boxes are included under Northeast and Northwest as appropriate but aren't shown on the maps.

** These swings are shown compared to the candidate's overall performance. For example, Betty Dunkerley captured 67.3% of the Central Austin vote. In Central Austin boxes that went for the smoking ban, she did four points better than that (or 71.3%); in the anti-ban boxes, she did 6.1 points worse (or 61.2%).

[Editor's note: The maps, charts, and accompanying analysis are a guest performance by former Chronicle City Editor Mike Clark-Madison, who really enjoys this sort of thing.]