An African nation's brutal past ... and present 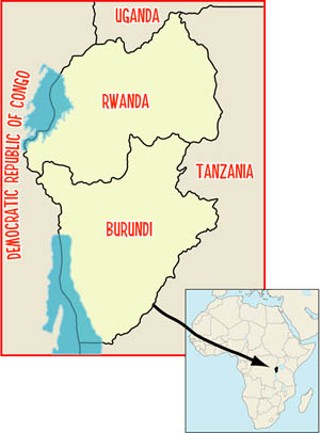 Burundi is a land-locked country about the size of Maryland, and just a few miles south of the equator in eastern Africa. With more than six million residents, it is one of the most densely populated countries in Africa. Bordered by Tanzania on the south, Rwanda on the north, and the Democratic Republic of Congo on the west, Burundi's lush agricultural land is underutilized due to the ethnic conflict that has raged almost since it gained independence from colonial rule in 1962.

The area now known as Burundi was originally inhabited by the Twa, a Pygmy people, but today the Twa make up only 1% of the population. The rest is split among Hutu (85%) and Tutsi (14%), who for many years lived peacefully together. Although most people describe Hutu and Tutsi as separate ethnic groups, prior to colonization there was little distinction other than by occupation – Hutu generally were agricultural people, the Tutsi cattle owners, and often seen as the elite. Some physical characteristics were also associated with particular groups: Hutu were described as short and squat, Tutsi as tall and thin. But the two groups speak the same language (Kirundi), often intermarry, and share many cultural characteristics. The distinction between Hutu and Tutsi was formalized during Belgian colonial rule when all Burundians (and neighboring Rwandans) were required to carry identity cards designating tribal ethnicity. When Burundi gained independence in 1962, a Tutsi was chosen as monarch and shortly thereafter – in 1966 – there was a Hutu-led rebellion. For the next 25 years there were regular bloody coups and hundreds of thousands of Burundian people – mostly civilians – were massacred. Finally, in June 1993, the first democratic elections were held, and Melchior Ndadaye, a Hutu, was elected. Later that month, in legislative elections, Sylvie Kinigi, a Tutsi, was elected prime minister, carefully balancing the government between the Hutu majority and the Tutsi minority.

On the day that Gilbert Tuhabonye calls the holocaust – October 21, 1993 – President Ndadaye was murdered in a Tutsi-led coup. Many Hutu began a rampage of violence in which thousands of Tutsi and Hutu civilians were killed – including entire villages being torched to the ground. The death toll for that October rampage has never been accurately tallied, but more than 800,000 Burundians fled their homes and became refugees.

Like the genocide documented in Rwanda during the spring of 1994 (recently depicted in the movie Hotel Rwanda) the killings of Tutsi by Hutu in Burundi were a brutal affair – thousands of people were killed with machetes and thousands more were burned alive. There is also documentation of violence against Hutu by Tutsi – and the killing rages on to this day. Although United Nations peacekeeping forces have been stationed in Burundi for years, rebels continue to clash, and Burundi is not considered a safe place for travel. Gilbert last returned home in December 1999, and his life was threatened. He says he will never return.