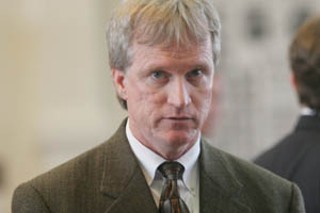 How is it that, whenever the political talk turns to ethics, Republicans are always the "victims"?

Last week, House Speaker Tom Craddick, of all people, was "victimized" by a powerless minority that had tried to rescue an ethics bill from an unfriendly committee and shuttle it onto the House floor for debate. It was a futile attempt, of course, because Craddick had already ensured that House Bill 1348 – despite having broad bipartisan support – would die in the Elections Committee, where the votes were stacked against it.

The bill, which boasted 93 cosponsors (not all of whom necessarily wanted the bill to reach the floor for an actual vote), would have tightened regulations banning corporate dollars in political campaigns and clamped down on last-minute attack ads paid for by secret donors. In other words, the legislation would have prohibited the very tactics that were used to pull off the GOP upset in the 2002 state elections. Craddick benefited enormously from those tactics then, as did Elections Committee Chair Mary Denny, R-Aubrey, and two other committee members.

The corporate-funded sweep touched off a three-year criminal probe that has so far led to the indictments of three associates of U.S. House Majority Leader Tom DeLay – himself a "victim" of alleged ethics violations.

Here in Texas, the leadership's line of thought is that we don't need no stinkin' ethics bill like HB 1348. A related line of thought – not necessarily held by the same people – holds that the bill would have made matters worse for Craddick and others at the center of a criminal probe or civil litigation. At any rate, you'd have thought the sky had fallen when renegade Rep. Tommy Merritt, R-Longview (who really was a victim of attack ads fueled by his own party, in the District 1 Senate primary) sought to save the bill with a motion to suspend House rules and bypass the committee's role.

Austin Republican Terry Keel, a co-sponsor of the bill, took the floor to chastise Merritt and House Democrats for their "PR stunt" – but not before the bill's lead co-sponsor, Rep. Craig Eiland, D-Galveston, made an impassioned plea for its survival: "We are simply trying to make sure that corporate money is limited and real people can have their voice heard ..." Thwack! Craddick's gavel cut Eiland short.

Keel took the front mic and read from a prepared statement in response to a comment that Rep. Jim Dunnam, D-Waco, had made the day before, suggesting a rescue attempt might be in order for the bill. Keel seemed to relish his role as Craddick's lead defender. "Is this motion a genuine desire by the movants to advance ethics legislation," Keel asked, "or could it be that this is the use of pending ethics legislation as a political tool to take shots at a member of the House?"

He continued: "If you want to really be sure that this bill is dead, if you want to drive a stake right through the heart of this bill and guarantee that it's dead ... vote for the motion that Mr. Merritt is carrying on behalf of Mr. Dunnam ..." Merritt and Dunnam tried to interrupt in protest, but Keel silenced both of them by requesting the back microphone be switched off (the controls are on Craddick's podium). He went on to declare that the move to bypass the committee process "in a bad-faith manner" did nothing more than seal the bill's fate.

The reference to the "bad-faith manner" reminded Democrats of a time not too long ago – July 29, 2003 – when House Republicans, including Keel, voted to suspend the rules to move a congressional redistricting bill out of committee and onto the floor for vote. At the time, veteran Rep. Paul Moreno, D-El Paso, said he had never witnessed such conduct. "We have completely destroyed democracy and become an oligarchy," Moreno said after the unprecedented maneuver.

Fred Lewis, executive director of Campaigns for People, blamed Craddick for killing the ethics bill. "His comments that he wasn't involved in killing HB 1348 are as untrue as his repeated statements that he wasn't involved with TRMPAC," Lewis said, referring to the political action committee of Texans for a Republican Majority, a target of the ongoing criminal investigation. "Is there any bill that Speaker Craddick wants that doesn't pass?"

As for Keel, his over-the-top performance on this and other bills this session has set off a swirl of whispers about his political vulnerability in his Southwest Austin district. There is talk of finding a "viable alternative" to run against him next time around.

Meanwhile, it was business as usual at the Lege this week, with the Elections Committee driving the final stake through HB 1348 during a lunch break on Monday. The vote was 4-2, in the brief huddle that had gathered around Chairwoman Denny's desk on the House floor.