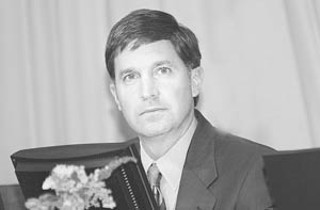 Mayor Will Wynn left the dais last week to testify against SB 1858, saying Austin could look after its own environmental rules, thankyouverymuch. (Photo By John Anderson)

Just as surely as the Colorado River flows to the Gulf of Mexico, Central Texas developers stream into the Capitol every other spring to convince lawmakers that Austin's enviro-activism movement is just a little too cumbersome and a bit too radical.

Austin's Save Our Springs Ordinance passed in 1992. It still remains the most progressive, and sometimes punitive, water quality policy in the state, and in the intervening years, the city has had to fight on both the legislative and legal fronts to protect its municipal ordinance, including the notable failure in House Bill 1704. It's as regular as the tides.

So it didn't seem like much of a surprise that Mayor Will Wynn would adjourn last week's Council meeting to take an emergency field trip to the Capitol to testify before the Senate Natural Resources Committee. The target was Senate Bill 1858, a bill authored by Chair Sen. Ken Armbrister, D-Victoria, that is intended to take away any local government's independent authority to set water quality standards. Instead, the Texas Commission on Environmental Quality would be deemed the great wizard on water quality, seeing all and setting all standards for each region of the state. "I suggest that folks in Austin and Central Texas recognized the importance of water-quality regulations to our economy and our quality of life and have taken the task of creating those standards very seriously," Wynn told the committee. "We have been lightning rods over the last couple of decades when it comes to water-quality regulations, and we've made some mistakes, but we've also made a lot of progress."

The SOS Alliance was infuriated by the bill. Brad Rockwell called TCEQ "incompetent" when it came to enforcing water-quality regulations. "They don't have the staff to do it, and they're not doing it," he said. "Local officials and groundwater districts that have the popular support and the budget should be given the power to do it."

But that's the beauty of SB 1858. It's not about enforcement. It's about setting the rules, and for years developers have considered the SOS Ordinance a hill too steep to climb. Attorney Dan Wheelus, a lobbyist for the Texas Landowners' Conservancy, says no one has ever justified that the 15 to 25% impervious cover limits were necessary to preserve and protect the recharge and contributing zones on Barton Springs. "The standards the TCEQ will set in sensitive areas may be similar to SOS. We don't know," Wheelus said. "What we do want to know is that the rules setting the standards are going to be scientific and not be politicized."

Rockwell pointed out that the agency has a staff of three to review plans over the Edwards Aquifer, while the city of Austin devotes a dozen people to the same task. In recent months, however, TCEQ has tried to strengthen its enforcement functions, creating a cross-agency team to review and prioritize investigation procedures. TCEQ has been a frequent target of local government for its lethargic response to environmental violations, but Wheelus said the agency doesn't need to be funded as a rule enforcer, just as a rule creator, and that's just the kind of authority the state agency has.

Travis Co. Commissioner Gerald Daugherty – whom no one has painted as an environmentalist – has hosted a series of meetings in Southwest Travis County with developers and residents, in order to figure out just how much is too much progress. At last week's hearing, Daugherty acknowledged many people would be frightened by TCEQ's taking over water-quality regulations, but he considered it a good move for the region. "I do think that, as long as we have the ability to go to TCEQ – 'we,' meaning the people of Travis County and Austin – I think that we'll have a spot at the table," he said. "I think they do understand that we do have special needs, and I'm confident we'll be able to work with them."

Wheelus sees no dichotomy between SB 1858 and the state's last two rounds of water legislation, which have set up regional planning authorities to assess and implement regional planning. Indeed, the TCEQ could do precisely the same thing, setting up regional water quality standards, dependent upon the environmental sensitivity of an area. Wheelus points to a February decision by the U.S. Fish and Wildlife Service to turn the protection of the endangered Barton Springs salamander over to the TCEQ. That's a sign that TCEQ can be trusted, Wheelus said. Now it's just a matter of lawmakers deciding who they intend to trust with water-quality decisions.