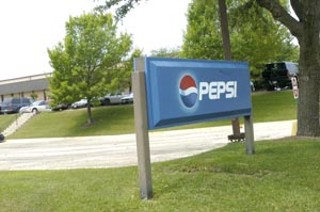 Labor representatives have picketed local Pepsi offices recently. They want the city to use its clout – via its exclusive vending contract – to pressure Pepsi to bargain in good faith. (Photo By John Anderson)

A two-year labor dispute might make Pepsi look a lot less sweet to City Council, which has been mulling over the nail-biter of a decision regarding which soft drink vendor should get the city's exclusive vending machine contract. Labor representatives attended the council's vending machine discussion to urge them to use the city's clout to pressure the Pepsi Bottling Group to bargain in good faith with its workers. "We don't want our tax dollars being offered in an exclusive arrangement to a company that is dealing in bad faith with Austin workers and Austin citizens," said Louis Malfaro of the Central Labor Council.

The saga began in November 2002, when a majority of the roughly 70 blue-collar employees at the Pepsi Bottling Group's Austin office – the folks who deliver the soda, fix the machines, and work in the warehouse – voted to join the Teamsters. (About 100 other employees remain nonunionized.) The workers decided to organize when PBG suddenly changed the drivers' pay scale from an hourly rate to a commission system, which the workers say resulted in a pay cut of around $7,000 for the same amount of work. (PBG spokeswoman Kelly McAndrew says the pay scale is a way to "incent" workers and give them the opportunity to earn more money.)

After employees form a union, the typical next step is to sit down with management and bargain a contract. Even though Pepsi employees in many other states have union contracts, the workers say PBG in Austin has refused to negotiate with them. They describe management blowing off scheduled meetings as well as refusing to "bargain" beyond offering again and again a contract the unions find unacceptable. "They don't ever come back with any counter offers," said Gary Whiteknight, a technician who has served on the negotiating committee. "They've had one offer on the table, and they will reject everything the Teamsters throw at them."

The workers believe PBG is trying to stall until the workers get fed up with the union and vote to disband, or "decertify." (Indeed, PBG's manager Jim Head told City Council that some workers had already made the move to decertify.) After all, as the months drag by with no contract materializing, it's logical that some workers may want to throw in the towel – especially when, as the workers allege, management uses the lack of a contract to withhold pay increases that nonunion employees at other PBG locations are getting. "Their strategy is delay, dishearten, and discourage. Wear us down, wear us out, and we'll go away," Teamster Phil Bunker said. "I'm sure Pepsi is amazed that we're still out there."

According Andy Levin of the national AFL-CIO, it's a strategy that works. Nationwide, about a third of the time that workers vote to form a union, they never reach a contract. "This is so much par for the course, it's sad," he said. "Even when you go through the process, you haven't won anything, because the employer won't negotiate." Levin says employers are able to drag out negotiations indefinitely, because very few consequences exist. Typically, he said, an employer who is found to be negotiating in bad faith is simply ordered back to the bargaining table, and told to play nice this time.

McAndrew insists Pepsi is bargaining in good faith. "There's nothing we're reluctant to agree to," she said, adding, "Every year, PBG successfully ratifies dozens of contracts." However, the National Labor Relations Board, sort of a court system for arbitrating labor law disputes between unions and management, has filed five complaints against PBG in Austin, and has two more pending investigations. A "complaint" is akin to having a grand jury decide there is cause to indict – it means the NLRB has decided that the union's charges that PBG is bargaining in bad faith are substantive. As part of the settlement, PBG had to post in the workplace a list of "we wills" and "we will nots" addressing the charges in the complaint: We will not withhold pay increases or promotions based on employees' union activity, we will bargain in good faith, and about a dozen other promises of good behavior.

McAndrew says that's all water under the bridge. "Those were months and months ago," she said. "Those aren't even an issue. That was last summer. I don't see what relevance that could possibly have in April 2005."

The relevance, says labor, is that PBG is still stalling. In the City Council discussion, Malfaro presented an April 5 memo given to workers attempting to organize at a Pepsi plant in Modesto, Calif. Urging workers to "Just say no to Local 386," it warns that collective bargaining can result in deadlock, citing the Austin impasse as evidence. It also warns that workers can come out of collective bargaining with less than they had before. McAndrew says the "just say no" document was simply a response to workers' questions about what guarantees unions could provide. To Council Member Daryl Slusher, however, it raises questions about PBG's intentions, both in Modesto and in Austin. "It could be perceived as a threat to take away workers' pay and benefits if they're associated with the union or if they get behind the union," Slusher said. "That would certainly not be the first time that's happened in the United States or in Texas, but since I'm sitting up here voting on whether to give an exclusive contract to this company, those kinds of practices would concern me greatly."

The council voted to postpone the exclusive vending decision to May 26 to give PBG and the workers more time to reach a contract.

*Oops! The following correction ran in our May 13, 2005 issue: In "Pepsi Brings Union Fight to City Council," May 6, the quote "Their strategy is delay, dishearten, and discourage. Wear us down, wear us out, and we'll go away," is incorrectly attributed to Gary Whiteknight. This was actually said by Teamster Phil Bunker.