Tweet
print
write a letter
Several hundred mourners, including many current and past city officials and City Council candidates, as well as many close friends and family members, filled the First Unitarian Universalist Church to overflowing at midday Tuesday, in honor of Mary Lou McLain, who died last Friday morning, April 22. McLain, 44, was a retired nurse and passionate health care advocate, president of the board of Family Eldercare, and a central force behind last year's creation of a Travis Co. Hospital District. She was married to Lee Leffingwell, Place 1 candidate for City Council, who has temporarily suspended his campaign. "It was not a timely death," began the Rev. Davidson Loehr, recounting what is known about the last hours of McLain, who committed suicide some time during Friday's early morning hours. Loehr said that there had been "no signs or symptoms" preceding McLain's action, and that she had given no indication to family or friends that she was despondent. She left only a note containing "a few disjointed and depressed thoughts," and had apparently been overwhelmed by a dark emotional moment "when our worse moods take us over." Recalling McLain's remarkable enthusiasm and spirited advocacy, Loehr said, "We have lost an energetic, competent, and intensely caring woman in the prime of her life."

Many friends and family members spoke movingly of McLain during a communal eulogy, and portrayed a woman of tremendous energy and compassion, a wry sense of humor, and a sharp, practical sense of the work always needing to be done. Charlotte Flynn of the Gray Panthers celebrated McLain's work on behalf of the hospital district, calling it one of her legacies, and called on the mourners "to continue with the struggle she so valiantly led all her life." Clarke Heidrick, who now chairs the board of the district, recalled the campaign that led eventually to an election victory, and said of McLain, "She worked harder than anybody else, and on the ground," and that everyone else worked harder because "we couldn't bear to tell Mary Lou if we had lost." He praised McLain's "strength, dedication, sense of humor, and most of all her selflessness."

Karen Langley, executive director of Family Eldercare and McLain's close friend, called McLain a "friend, leader, giver, advocate, and lover of life," and acknowledged the deep sorrow in everyone's heart over McLain's inexplicable death. "We cannot know what it was, and what it was about. … We must celebrate all you were to us, and seek to fulfill your legacy."

McLain's sister, Chris McLain of Sarasota, Fla., thanked the congregation for the love they had shown her family, and said of her sister (youngest of four), "The angels smiled the day that Lulie was born." She concluded, "We recognize that your pain and suffering are as significant as ours. … We're a family." 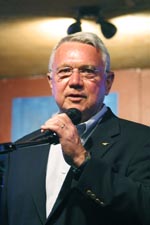