On or off the dais, looking for a little wisdom along Austin's color line

The strangest moment thus far in the ongoing melodrama over the Midtown Live fire and its aftermath occurred last Thursday, when the City Council "postponed indefinitely" the pending proposal to appoint a "blue-ribbon committee" to investigate the quality of life for African-Americans in Austin and make recommendations to the council. The committee proposal, sponsored by Mayor Will Wynn and council members Betty Dunkerley and Daryl Slusher, had already been once delayed, but amidst his opening agenda revisions the mayor noted in passing the indefinite postponement of "Item 20" on the consent agenda, only to be brought up short by Slusher: "Mayor, I wanted to say on 20 ... I think a better description would be, 'withdrawn.'"

In bureaucrat-speak, "indefinite postponement" is generally a euphemism for "dead and buried," and Slusher understandably wanted to make that explicit. Nonetheless, nobody gave any public reason, at all, for the change. Apparently, Slusher and the two co-sponsors had decided, prior to the council meeting, that the committee would be redundant for the public meetings for black Austinites to be held this week, and that it would be misdirected and even unfair to ask an appointed committee to take on a controversial burden that properly belongs to the council alone.

I say "apparently," because you couldn't tell any of this from the council meeting itself, where the matter was presumably considered too sensitive to actually discuss in public. Citizens had to work this logic out for themselves from an editorial that appeared in Thursday morning's Statesman – before the council meeting – in which the daily congratulated Slusher (in advance) for instigating an outburst of "common sense" by moving to withdraw the proposal. (Slusher had responded to questions from Editor Arnold Garcia.) The editors predictably got things wrong – both about the changes as well as the chronology, confounding the nightclub fire with the "African American Community Scorecard" that was in progress months before, and calling the whole thing "City to solve its own problems?" – as though the appointed citizens committee was to be imported from Outer Mongolia, or Oklahoma.

Appropriately enough, a couple of hours later the meeting recessed so that council members could dutifully troop to the funeral of Dorothy Turner. There they no doubt breathed quiet sighs of relief that Turner herself – so sharp of tongue and so indiscriminate of judgment – was no longer around to verbally castigate them for their many failings. They would have to settle instead for former Council Member Eric Mitchell on the pulpit, and then, after the services, for the Austin NAACP's Nelson Linder.

Linder, while certainly no Dorothy T., was himself in formidable dudgeon. He blasted the council for dropping further discussion of the Midtown Live loan proposal, and for neglecting far too long the singular troubles of Austin's black community. Linder recounted the various studies, going back a decade or more, that have come to pretty much the same conclusions as the city's recent "Scorecard" – that African-Americans continue to fall behind the rest of the city – and curtly suggested that yet another study is hardly necessary. "We don't want another study done that looks at issues of economic disparities," Linder said. "We want actually to create opportunity that affects all of our people."

Linder concluded that this council is at a "crossroads" – like Lincoln or LBJ before them, he suggested – and that unless it acts boldly, the moment will be lost. He warned, "This issue is not going to die down. Until black folks in this city get parity and fairness and equal opportunity, it's only going to get worse and worse and worse." It was abundantly apparent that from Linder's perspective, the nightclub fire controversy was but a symptom of a much broader problem among Austin's often polarized communities.

In fairness to this council, although it lacks a rhetorical focus – the mealy-mouthed handling of the committee defenestration was one more lost political opportunity – it has not been entirely inattentive to the problems of the Eastside, and is indeed currently engaged in efforts that could reach far beyond the noisy but narrow argument over Midtown Live. Later in the same meeting, the council addressed briefly the work in progress concerning the Eastside redevelopment program ("Community Preservation and Revitalization Zone for East Austin") of council members Raul Alvarez and Danny Thomas, which should return in more detail to the next meeting, April 28. As summarized by Neighborhood Housing and Community Development director Paul Hilgers, the hope is that the city will find ways to bring serious economic redevelopment to the area (roughly from Manor Road south to Riverside) – in Linder's phrase, "to create opportunity that affects all of our people" – without thereby triggering a relentless pattern of gentrification that results in overwhelming and displacing the very people the program is in principle intended to help.

It will not be easy. The ineluctable contradiction of any economic development program is that it is designed to broaden and deepen the tax base, and in a state like Texas that depends so heavily and irrationally on property taxes, increasing the tax base means bolstering property values, which puts financial pressure on those with the least income flexibility. It very much remains to be seen if the Alvarez/Thomas program can sufficiently avoid that trap, by means of wage and affordable housing guarantees aimed at preserving an Eastside that can remain home to all kinds of people, not just invading waves of higher income "urban pioneers."

How did we get to this point? Later in the meeting, there was a memento of that dismal story, too. It came up during an otherwise unremarkable zoning case, intended to preserve a historic Clarksville house that was once home to John and Josephine January, an African-American couple who lived there when Clarksville was also "Freedmen's Town" – home to former slaves and descendants of slaves freed by the Civil War and Reconstruction. The house represented, recalled historic preservation staffer Steve Sadowsky, "the essence of where African-Americans lived [in Austin]. And then," Sadowsky continued, "the 1928 city plan established an African-American district on the Eastside – which led to much greater segregation."

So much of what we need to do is contingent upon undoing what we've already done. 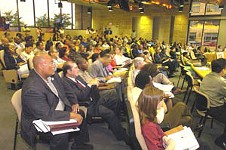