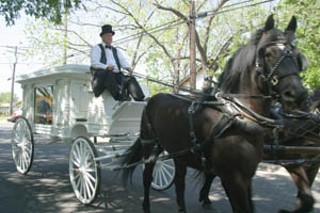 Longtime East Austin civil rights activist Dorothy Turner was laid to rest last week, taken to the hereafter in this horse-drawn hearse. Community leaders of various stripes, even some of with whom she butted heads, bade farewell to Turner at her funeral. For more, see "Dorothy T. Goes Home." (Photo By Jana Birchum)

"Up there [in the U.S. Congress], they have 400-and-some on the House side – 454 – and they have fewer on the Senate side: 60." – Texas House Speaker Tom Craddick, guest-teaching a Mendez Middle School class last week, and revealing the need to do a little cramming before he takes the TAKS test. (For the record, there are 435 U.S. Representatives and 100 U.S. Senators.)

• Early voting for Austin's May 7 municipal election began this week, and continues through May 3. The campaigns are getting earnest: Charges of financial irregularities and corruption are being lobbed, and as our "Postmarks" department reflects, Austinites are all in an uproar – pro and con – about the proposed smoking ordinance. For more election info see "The Council We Deserve?"and our endorsements.

• The City Council "indefinitely postponed" – that is, canceled – the "blue-ribbon committee" to study quality-of-life issues for African-American Austinites, but the community discussion goes on. See "Point Austin" and "Happenings."

• In yet another spasm of official heterosexual hysteria, the Texas House voted 81-58 Tuesday to prohibit gay people from serving as foster parents, in an amendment to the Child Protective Services reform bill that was approved and sent to conference committee, where the amendment may not survive. The amendment was sponsored by notorious gay-basher Rep. Robert Talton, R-Pasadena, who informed the House solemnly that homosexuality is "a learned behavior." Bigotry, as the song goes, also has to be carefully taught.

• On April 11, Place 4 City Council candidate Wes Benedict filed a complaint with the Texas Ethics Commission, charging his opponent, incumbent Council Member Betty Dunkerley, with "numerous" violations of state elections law. He also filed a related complaint with city officials. Benedict's state complaint describes inaccurate filings of loans and expenditures dating from Dunkerley's 2002 campaign, and his city complaint charges that Dunkerley violated the city election code by accepting excess contributions in connection with the same campaign. In its initial response to the charges, Dunkerley's campaign did acknowledge some reporting errors, but campaign spokesperson Mark Nathan said they were inadvertent and "not substantive," and that the campaign is filing corrected reports wherever applicable. – Michael King

• The AISD board of trustees on Monday extended the contract of Superintendent Pat Forgione in his annual review, but declined to give him a pay raise. Forgione, who has led the district since 1999, earns $247,000 a year, and now has a contract that extends to 2009. In their annual review, trustees praised increasing test scores, passing a $519.5 million bond issue, and new initiatives like the ongoing high school redesign process and focus on bilingual education. However, trustees also said AISD needs to continue improving test scores, solicit broader input as they move forward with the redesign, and pay more attention to middle schools so the students enrolling in the redesigned high schools will have a good foundation to build on. They also made vague references to the need to "improve customer service and treatment of stakeholders across the District." – Rachel Proctor May

• In terms of history, the Orsay-Koch-Hegman House may end up being the city's next Schneider Store, or next Liberty Lunch. It all depends on the City Council. As with Schneider – which was preserved while the Lunch was demolished to make room for the CSC buildings – the Zoning and Platting Commission carved out a 110-year-old house on Neches Street for historic zoning, smack dab in the middle of a mixed-use development being planned by Jimmy Nassour and Steve Soward. The project also would knock down the Velvet Spade on Red River. The severely neglected house, which developers say has been altered inside several times, once was the home of Henry Orsay, who led federal troops into Austin at the end of the Civil War. ZAP Chair Betty Baker led the charge to recommend historic zoning on the property, after the Historic Landmark Commission offered a split vote on the historical value of the property, uncertain how much of the original building remained. Now it's time for Council to make its own decision. – Kimberly Reeves

• Austin Energy announced on Tuesday that it would scale down its highly successful solar rebate program. According to AE's Roger Duncan, the decision to decrease the rebate amount by 10% (which amounts to $4.50 vs. $5.00 per kilowatt of system capacity) was based on the program's tendency to rapidly gobble up its budgeted city funds and its long waiting lists, not to mention a new U.S. Department of Energy study of currently available rebate programs that identifies the most successful programs to be those in the $4-$5 range. "With those factors in mind, we feel like we can lower the rebate by 10% and still have consumer demand, while making the best cost effective use of public money." Duncan said AE would certainly roll back the changes if the solar rebate program's demand decreased. Since June of 2004, the program has issued 82 rebates totaling over $1.5 million, with an average rebate of $13,603. For more info see www.austinenergy.com. – Daniel Mottola 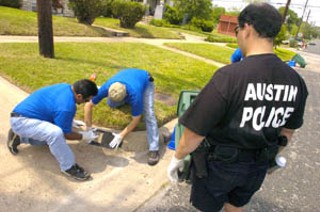 A 2005 Spring Spruce-Up Day event hosted by the city of Austin Neighborhood Housing and Community Development Department was held last Friday as part of the United Way's Day of Caring. City staff painted addresses on street curbs for homes in the Anderson Hill and Robertson Hill neighborhoods to help EMS, police, and fire vehicles to find homes more efficiently during times of emergency. (Photo By John Anderson)

• Austin Housing Finance Corporation, along with the Enterprise Foundation and Austin Community Development Corporation, announced Tuesday that they would award $256,000 in grants to 10 local nonprofits. The funds will be used to create more affordable housing for homeless, disabled, and low-income citizens. "As with many cities across the U.S., Austin has a significant need for affordable housing," said Doris Koo, Enterprise Foundation vice-president and western regional director. The collaborative effort to award the grants originated with requests from area community housing development organizations for funding to increase their current capacity. The grants range from $12,000 to $44,000 and will benefit a broad range of organizations, including United Cerebral Palsy of Texas, Austin Habitat for Humanity, the Mary Lee Foundation, and a variety of neighborhood development groups. – D.M.

• Next week, April 25-29, the city will host daily forums on "the quality of life of African-Americans in Austin." The general public is invited, but the emphasis is on getting feedback from African-American residents, with a different target group for each meeting. All meetings will take place at the Street-Jones Building, 1000 E. 11th, fourth floor conference room. The meeting schedule with targeted groups (others welcome) includes: students, Monday, 6-8pm; corporate citizens, Tuesday, 11:30am-1:30pm; community leaders, Tuesday, 6:30-8:30pm; professionals, Wednesday, 11:30am-1:30pm; native Austinites, Thursday, 6:30-8:30pm; entrepreneurs and artists, Friday, 11:30am-1:30pm.

• UT's Campus Antiwar Movement to End the Occupation and the Youth Activists of Austin are sponsoring Stop the War Day today (Thursday). Protest the U.S. occupation of Iraq at 3pm on UT's West Mall steps. E-mail antiwarcampus@yahoo.com for more info.

• Big Choices: The Future of Social Security, a policy symposium with panelists from the Brookings Institute, the New America Foundation, the Heritage Foundation, the National Committee to Preserve Social Security and Medicare, and others, will be held today (Thursday), 12:30-5:15pm, at Bass Lecture Hall on the UT campus (LBJ School of Public Affairs, Red River between Manor and 26th). Call 471-4746 or see www.utexas.edu/lbj/news/spring2005/big_choices.html.

• The Austin Toll Party will host a benefit concert to fund its efforts against toll roads tonight (Thursday), 7:30pm, at the DoubleTree Hotel North at 6505 N. I-35, with Jimmie Vaughan, James Cotton, and the Jon Emery Band, and featuring politicians including State Comptroller Carole Keeton Strayhorn, possible Democratic gubernatorial candidate Chris Bell, Austin state Reps. Terry Keel and Todd Baxter, and City Council Member Brewster McCracken. Tickets are $25 in advance (buy them at www.austintollparty.org or call 371-9926) or $30 at the door.

• Austin Groups for the Elderly (AGE) will host an awards dinner to honor Rep. Elliot Naishtat, Suellen Mills of Meals on Wheels, and Clinton Smith of the Gray Panthers – just to name a few – for their contributions to Central Texas' elderly, on Friday, April 22, at 6pm. Tickets are $85, and sales go to support services such as AGE's adult day-care program and peer computer counseling center. UT Alumni Center, 2110 San Jacinto. www.ageofaustin.org or 451-4611.

• People Organized in the Defense of Earth and Her Resources (PODER) will celebrate its 14th anniversary celebration on Friday, April 22, 6-8pm at Fiesta Gardens, 2101 Bergman. Host is Austin City Council Member Raul Alvarez, and festivities include ceremonial dances, songs, and poetry. 472-9921 or www.poder-texas.org.

• On Saturday, April 23, participants in The Junior League of Austin's Hispanic Mother Daughter Program will come together from 10am to 3:30pm at UT's School of Social Work (1925 San Jacinto) to celebrate their Latina heritage and culture at the second annual Soy Unica, Soy Latina Rally. Each speaker will share her life story, successes, and how her identity as a Latina living in the United States has shaped and influenced her life. The goal is to inspire young Hispanic women to embrace and celebrate their culture as they aspire to higher education and become future leaders in our community. Call 917-8919 or e-mail koddo@winstead.com for info.

• Armenian-Americans from all over Texas will gather on Saturday, April 23, 1pm, at the Texas Capitol for a remembrance of the Armenian Genocide, in which over a million Armenians were killed by the Ottoman Empire during World War I, in what is often called the Forgotten Genocide. Free. www.genocideevents.com.

• Code Pink Austin hosts a free screening of Senorita Extraviada (Missing Young Woman), a documentary film by Lourdes Portillo about the more than 320 women murdered over the past decade in Juarez, Mexico. Sunday, April 24, 12:30pm at the Austin History Center (810 Guadalupe). For info, e-mail codepinkaustin@yahoo.com.

• The ACLU will host a "Last Chance" City Council Candidate Forum followed by a Taser Town Hall Meeting on Wednesday, April 27, at Huston-Tillotson University in the Agard-Lovinggood Auditorium (across the courtyard from the Chicon Street entrance); the forum runs 5:30-7pm; the Town Hall Meeting 7-8:30pm. Hear where Austin City Council candidates stand on civil rights and liberties issues, and then join in a discussion af APD's use (and some say abuse) of Tasers (electronic shock devices touted as "non-lethal" by the maker). For more info call 573-6194.

• Third Coast Activist Film Night presents Chavez, Venezuela and the New Latin America on Thursday, April 28, at 7pm, at the Alamo Downtown (Fourth and Colorado). This documentary examines Venezuelan President Hugo Chavez and how he has emerged as an iconic figure in anti-imperialist and social justice movements. Tickets ($6.50 general, $5 student/senior) are available at the event or at www.drafthouse.com. For more info, go to www.thirdcoastactivist.org.