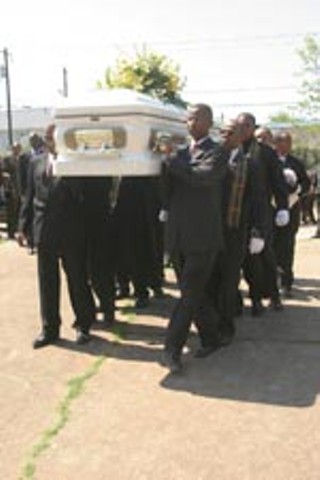 Dorothy Turner's casket is carried into the services. (Photo By Jana Birchum)

Hundreds of mourners gathered at St. John Tabernacle on April 14 to honor Dorothy Nell Turner, the fiery and feisty queen of Austin civil rights activists. Turner died at home on April 6 after a long battle with cancer. She was 69.

Turner's unwavering and occasionally unnerving commitment to fighting racial injustice took many forms – as longtime president of the Black Citizens Task Force (founded by fellow activist and Turner confidant Velma Roberts), as ally of the John Brown Anti-Klan Committee, as crusader against police brutality, as champion of the Millennium Youth Entertainment Complex and Austin's KAZI-FM, among other causes – and attracted both friends and foes. Over the years, Turner's emotional style prompted some to conclude that the real "enemy" Turner railed against was anyone who disagreed with her. Not so, said Turner's longtime friend Trella Laughlin, who worked with the Anti-Klan Committee and the BCTF. "Anybody who's not angry about injustice has a mental problem," Laughlin said. "[Turner] was angry and also intolerant of people who did nothing to change injustice."

Indeed, city officials often found themselves on the receiving end of Turner's "intolerant" ire. For example, in 1997, addressing the City Council regarding construction delays on the MYEC, Turner joined former Council Member Eric Mitchell in attacking then Council Member Willie Lewis (who had unseated Mitchell), labeling Lewis a tool of the city's enviros who, they argued, prioritized all things water-related above the other basic needs of Eastside minorities. Although the attacks on Lewis (and other members of the council, particularly Daryl Slusher) often took on a nasty tone (with Lewis dubbed a turncoat, among other things), Lewis says he always respected Turner's causes and points of view. "It didn't bother me," he said recently. "You're only ever going to satisfy 25 percent of the people because 50 percent don't give a shit what you do, and 25 percent are going to disagree with you no matter what you do, and you have to understand that … I got along with Dorothy all of the time, because I understood where she was coming from."

Turner wasn't bothered by those who disagreed with her, Laughlin said, she was bothered by those who chose not to fight at all. "She just understood that the deck is so stacked against any real and significant social change, you have to be aggressive to fight it," she said. "Dorothy tried to overcome that by speaking loudly for the maids, the cooks, the yardmen, the people at the bottom. Nobody else spoke for them. … Especially white folks – white folks will give up on a struggle in a New York minute if it makes them feel uncomfortable."

Laughlin's assessment was echoed by a host of Turner's friends and associates who spoke during the several-hours-long service last week – including Mitchell, Travis Co. Judge Sam Biscoe, Council Member Danny Thomas, and BCTF member and former Statesman columnist Susan Smith – and through a number of posthumous awards honoring Turner's activism. Thomas presented a "distinguished service award" on behalf of Mayor Will Wynn and the council; Brown Beret activist Paul Hernandez presented the family with the group's signature chapeau – "She more than earned it; she fought for us and she fought with us," he said; and Mitchell joined youth activist (and Turner protégé) Jenniffer Muhammed to honor Turner with an MYEC "Keeper of the Promise" award. (True to form, Mitchell also recalled the protracted, contentious, and, ultimately unsuccessful bid to rename historic Rosewood Avenue after Turner, by reminding the crowd that the MYEC is located on "Dorothy Turner Boulevard," eliciting a round of cheers.)

Although many will likely remember Turner for a handful of tangible accomplishments (like the MYEC), her legacy is more far-reaching, said the Rev. Sterling Lands, pastor of the Greater Calvary Baptist Church. "Those things aren't about anything as it relates to the long-lasting advancement of people," he said. "When you spin [those] off and get to the real issue, [you see] that [Turner] was a light shining into a corner with a lot of nasty stuff in it. She was the alarm that something was broken, and you couldn't reset the alarm until the problem was fixed."