AMD and the Edwards Aquifer

'We really wish you wouldn't go there' won't cut it anymore 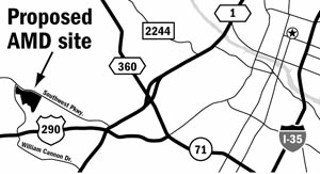 Austin's long-held policy of shooing, coaxing, begging, bribing, and guilt-tripping major employers to stay out of the Barton Springs watershed could suffer a big upset if Advanced Micro Devices breaks from tradition and moves to an environmentally sensitive spot in Southwest Austin known as the Lantana tract.

By most indications, AMD is poised to abandon the Desired Development Zone for a 60-acre watershed tract, despite mounting environmental opposition and a "we-really-wish-you-wouldn't-go-there" frown from City Hall, which is hamstrung by grandfathered land entitlements and, as always, a paralyzing fear of the state Legislature. The only weapons in the city's arsenal at this point are pressure, and possibly a quick-and-dirty zoning change, but it's uncertain if officials would pull any last-minute tricks to try to undo what already looks to be a done deal.

History has shown us, however, that projects that start out as done deals turn out to be only half-baked. Similarly, AMD has said it doesn't need anything from the city to facilitate the move, but how many times have we heard that before?

To soften the public shock of a giant corporation moving nearly 3,000 employees into environmentally sensitive territory, AMD and landowner Stratus Properties have gone to great means to doll up their proposal with plenty of lipstick and backlighting. The plan comes with a $5 million mitigation gift for land acquisition and a commitment to adhere to strict Green Building standards. AMD has enlisted Gail Vittori, a nationally recognized Green Building guru, to oversee the project's green components. "They're going to throw their wallet at this project to make sure it's done right," said Stratus CEO Beau Armstrong. (Armstrong of late has been trying to steer Stratus' own growth direction to the urban core, where the company is currently bidding on developing two of the city's showcase projects – Block 21 and Seaholm.)

Also, AMD says the campus would generate an estimated $2.6 million a year in property taxes for the Austin school district, and would eliminate the 10,000 vehicle trips per day that employees currently make to one of 12 offices scattered throughout Austin. The company notes that more than half of its employees live within a 10-mile radius of the Lantana site, located at William Cannon and Southwest Parkway. (The project's most vocal opponent, the Save Our Springs Alliance, notes that AMD CEO Hector Ruiz lives just a few miles from the tract.) The proposed project has won rave reviews from the Greater Austin Chamber of Commerce, Oak Hill neighborhood and business leaders, and, of course, the American-Statesman, which weighed in with a predictably favorable Sunday editorial.

City Council Member Daryl Slusher sounded the obvious concerns about the sheer size of the project – 825,000 square feet, ultimately – and the unintended consequences of what could follow. "I think it will spur more development over the Barton Springs zone," he said, "and other major employers will stop honoring the community value of locating in the Desired Development Zone." Under the city's Save Our Springs ordinance, the Lantana project would ordinarily be held to 20% to 25% impervious cover limits because of its location in the contributing zone of the Edwards Aquifer (projects in the recharge zone are held to 15%). An agreement reached with the city in the warring Nineties allows Stratus to build up to 39% impervious cover, and AMD's proposal comes in below the allowable maximum, at 31%.

Stratus' Armstrong says he has passed up "numerous opportunities" to develop a retail power center at the commercially zoned site. He also believes the Lantana tract is better suited for a single large employer, whose workforce lives within a short commute of the site, as opposed to a multiple number of smaller employers and office buildings that may not fit the "green" bill. SOS spokesman Colin Clark takes issue with that claim. "AMD is one of the few employers in Austin that could move 2,000-plus employees to a new location in 18 months," he said. "Smaller buildings would be built over years, not in a matter of months, as AMD would."

It's hard to turn down a $5 million check to go toward the purchase of open space, but Clark argues that the dollar amount "won't come close to offsetting the growth boom AMD will spur" if it moves to the Lantana tract. Those familiar with watershed land values say the money could buy a few hundred acres of land, which currently runs from $10,000 to about $25,000 per acre. But ideally, real estate experts say, the $5 million could stretch further if used as leverage in the city's 2006 bond election. It could, for example, be used as earnest money to hold optioned land in place until, and if, voters approve $50 million for land acquisition, assuming that's the figure that makes it onto the ballot.

Construction on the AMD project is expected to move at a fast clip, with work on the first three of five buildings scheduled to start next year and run through mid-2007, when some 2,000 corporate, administrative, and engineering employees would move to the new campus. AMD has a long-term lease on the nearly 60-acre site – plenty of space to accommodate what could grow to a 2,900-employee complex. (Meanwhile, about 1,000 employees will remain at AMD's southeast Austin manufacturing site, home of the company's flash memory unit. The unit has proven to be more of a financial liability than an asset, which is why the company plans to spin it off in a public offering.)

Before last week's announcement, city officials had tried shopping a number of available properties to AMD at locations north, east, and central – miles from the watershed area – including the downtown property that Vignette had optioned a few years ago on East Cesar Chavez. Did the city do enough to dissuade AMD from moving to Southwest Austin? That depends on who's answering the question. "In our view, no," says SOS spokesman Clark. "Specifically, the city can rezone the Lantana property to a more appropriate use, such as residential," he said. Clark went on to quote Stratus' own attorney, Steve Drenner, who told the Chronicle in a separate land-use matter ("Rumble at Bunny Run," Feb. 18, 2005), "There's nothing permanent about zoning. It's always left up to the discretion of future city councils."