The Politics of Annexation 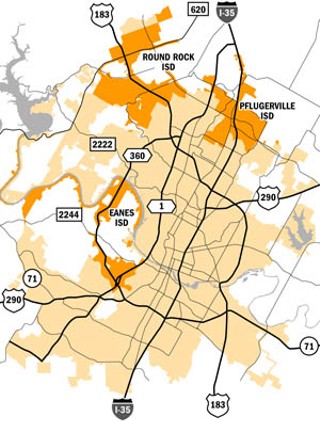 Austin voters will decide May 7 whether residents in the darker-shaded areas shown above will join the ACC taxing district.

Voting to raise your own taxes is hard. Voting to raise someone else's taxes? Perhaps less so. As Austin voters face difficult decisions on May 7 – Smoking ordinance? City Council candidates? – for many, one choice on the ballot will be a no-brainer. That is whether Austin Community College should annex to its taxing district the 12% of Austinites who don't currently ante up for ACC. The annexation, if it passes, will bring the district a not-too-shabby $6.5 million a year in extra revenue. But as nice as that may be, some folks are still left wondering if allowing the 88% of Austinites who already pay ACC taxes to vote to raise the taxes for the rest doesn't seem a bit, well, undemocratic.

Whether or not it's fair, the annexation vote is legal. (This is despite a request by a Round Rock taxpayer group for the Department of Justice to investigate the college for alleged violations of election rules and the Voting Rights Act.) State law clearly allows all residents of the city in which a community college is based to vote to annex everyone within the city's borders. But since its founding as part of Austin ISD in 1973, ACC's growth has come from residents of an ISD voting to join the district: Leander ISD joined in 1985, Manor in 1997, and Del Valle in 2003. Voters in these districts decided the extra property taxes – currently $0.10 per $100 of assessed value – were worth it because joining the taxing district means paying lower tuition: In-district students pay $39 per credit hour, compared to $97 for out-of-district students.

Because ISD boundaries are a poor match for municipal ones, however, Austin residents who live in Eanes, Round Rock, and Pflugerville ISDs don't pay ACC taxes, and pay the higher tuition rate. But even with that rate, ACC taxpayers still subsidize out-of-district students to the tune of about $51 per credit hour. That, says ACC's interim president Steve Kinslow, ain't fair either, and that's why all of Austin should vote on the annexation. "Current taxpayers are paying part of the freight for out-of-district students, so perhaps they should have a voice," Kinslow said.

The debate is one that will in some way touch every Texan. An often-cited 2000 report by the Higher Education Coordinating Board, called "Closing the Gaps," warns that even as Texas' population is increasing, the educated percentage is shrinking. "Closing the Gaps" issues dire warnings about the economic prospects of a state without a skilled, educated workforce to attract business and investment. As a remedy, it calls for 500,000 new college students by 2015, which has sent community colleges scrambling to beef up their rosters at a time when state appropriations are in decline.

"If the state says, 'Close the gaps,' but is decreasing the funding for community colleges, there are only two other options," said ACC board President Barbara Mink. "Either we increase tuition, or we increase the tax base. And if we're going to keep education affordable, we can't keep going back to the students year after year."

ACC representatives also point out that the college can provide value to even those students who see their futures at four-year institutions, and who dismiss two-year schools as the stepchild of the higher education system. "In many cases, there's a failure to understand the unique role of community colleges," Kinslow said. "Often these folks say, 'My kid is going to Harvard or Yale.' But a lot of times, they're not." In Pflugerville and Round Rock ISDs, for example, more graduates go to ACC than to any other institution; in Eanes, ACC is second only to UT.

Of course, many of these students are bound for a four-year institution; their time at ACC is simply a way to save tuition dollars and time through dual-credit high school courses (either in their high schools or on ACC campuses) or the summer before freshman year. In fact, the ACC board of trustees in February decided to levy a $40 fee for out-of-district participants in early college start programs not held on high school campuses, in large part because so many participants were well-off students from outside the ACC taxing district who were cruising through their college prereqs on the Austin taxpayer's dime. By taking American History or English 101 for free, students can save thousands when they transfer to four-year institutions (especially if they're headed for Yale). Of course, those savings may or may not cancel out the property tax increase; however, they are an argument for supporting the institution that makes the savings possible.

But even those who recognize ACC's value may still chafe at the way the vote is set up – and indeed, a whole-city annexation vote may not be legal much longer. Rep. Bill Callegari, R-Katy, has filed HB 1013, currently pending in committee, which would outlaw elections like the one ACC has called. In the future, only the people who would be affected by the annexation would be allowed to vote. While Callegari agrees that increasing the percentage of Texas grads who pursue higher education is a "laudable goal," he says that shoving community colleges down people's throats is simply the wrong way to go about doing it. "Asking the college to have a vote only by the district to be annexed is certainly a doable thing," he said. "It's been done many times before and will continue to be done."

If Austin voters approve the annexation, HB 1013 won't affect ACC. However, the fact that ACC trustees called the annexation election this year, before it possibly becomes illegal, won't make the college any new friends in the burbs. The decision may, as trustee Lillian Davis put it, "come back to haunt us." In other words, it could leave the remaining 70% of Pflugerville ISD, 75% of Round Rock ISD, and 62% of Eanes ISD disinclined to hold their own vote to join the ACC taxing district in the future. Still, Kinslow is confident that more and more local communities will recognize ACC's value, both for individual students, and for the Texas economy as a whole, and will choose to support that value through their tax dollars.

"Public education benefits everyone," Kinslow said. "You invest up front, or you pay through the back end by higher social service costs."