"I met Bianca Jagger back when I had an afro!" said Sen. Rodney Ellis on the Capitol steps Friday, April 8, in a fleeting moment of levity. Ellis, speaking for an indisposed Rep. Harold Dutton, was addressing Amnesty International USA members in Austin for AI's 2005 General Meeting. Saying there is "still time to slow down the death row express in Texas," he introduced Jagger, who spoke of Gary Graham, convicted at the age of 17 via an unreliable eyewitness account and no physical evidence. Tina Duroy spoke for her executed brother, sexually abused paranoid schizophrenic James Colburn. The bitter irony, said Duroy through her veil of tears, was that "the same state that wouldn't help him with medication killed him." Carol Byars also spoke of devastation, but from another perspective. She spoke on behalf of her husband, who she said forgave the man that put him on his deathbed. "The death penalty does nothing for us," Byars said. "You can only kill a person one time – then, who do you hate?"

At the Hyatt Regency, AIUSA Board Chair Chip Pitts made it known that AI is more relevant that ever. Saying human rights were "bleaker than they've ever been in my lifetime," Pitts marveled at the Bush administration putting torture back on the table. "Sending people [to other countries] to be tortured is also against the law," he intoned to applause. Pitts also spoke of the grave problems of disappearances in Nepal, AI's newest front, and of the need to reach out to groups traditionally outside AI's sphere, such as Latinos and Muslims.

In his last meeting as executive director before retiring the title, William Schulz gave an impassioned, animated defense of human rights. He pointed to many recent victories – the release of a Chinese businesswoman and a Vietnamese priest, Tasers under review in many police departments, and the Supreme Court's decisions barring execution of the underaged and mentally retarded. Calling violence against women "the biggest scourge on the face of the earth," Schulz said they were marking the maquiladora workers of Juarez, Mexico, and Native Americans for assistance. And in closing, he admonished the audience not to succumb to outrage, cynicism, or overearnestness, but to fight as "history is not finished … the future is not set."

Welcoming the attendees to "the little blue dot in the middle of the big red state" was the indefatigable Molly Ivins. She delivered a comic Texas politics crash course, busting on former speaker Gib Lewis and current speaker Tom Craddick, saying his possible indictment would be "carrying on a grand political tradition in Texas."

Hawa Aden Mohamed was then introduced. The 2005 recipient of the Ginetta Sagan Award, honoring defenders of women and children's rights, Mohamed has led efforts in Somalia to end female genital mutilation, which has afflicted 98% of the population. Calling it "the worst from of physical violence against a child," she related how FGM led to the death of her younger sister. Galvanized, she led a massive public outcry against FGM, mobilizing 20,000 women and children into the streets. The $10,000 prize she received was going toward the completion of her women and girls hospital. 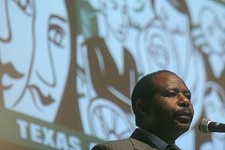