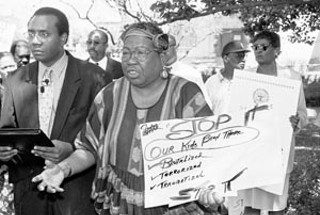 Austin civil rights activist Dorothy Nell Turner, 69, died Wednesday, April 6, after a lengthy illness. Turner, former president of the Black Citizens Task Force, was both legendary and notorious for her uncompromising approach to battles over discrimination in employment, Eastside economic development, and a host of more specific issues like the 1995 Valentine's Day police assault on a Cedar Street party – Turner is pictured here during a Cedar Street protest at the federal courthouse. Funeral services for Turner are today (Thursday), noon, at St. John's Tabernacle Church, 7501 Blessing Ave. (Photo By Alan Pogue)

"The time to kill a snake is when you've got the hoe in your hand." – Rep. Fred Hill, R-Richardson, urging legislators to defeat the Rick Perry-endorsed bill to cap local property tax appraisals. See "Lege Notes."

• Early voting begins this week (April 20 to May 3) on elections for three City Council places, a stricter anti-smoking ordinance, and Austin Community College annexations (See our endorsements). We urge everybody to get out and vote.

• Advanced Micro Devices reportedly will announce today (Thursday) that it will be building a new facility on the Stratus Properties Lantana tract, which just happens to be over the Edwards Aquifer recharge zone. And those charming folks from Wal-Mart will appear before the Zoning and Platting Commission on Tuesday, April 19 (6pm at City Hall) to request an environmental variance for their proposed store on Highway 620 at Rock Harbour. For more on AMD, see "AMD Plans to Move Over Edwards Aquifer."

• Also on tap Wednesday were Senate and House bills that would "grandfather" initial development plans upon submission, exempting them from subsequently adopted local regulations.

• The AISD board of trustees postponed until April 25 a vote on whether to include health benefits in its calculation of prevailing wages to be paid on school district construction contracts. A citizens committee recommended the benefits be included, but AISD administrators say the cost is too high. See "The Prevailing Wage Guessing Game."

• The Capital Area Metropolitan Planning Authority postponed until June its vote on the revised 2030 Mobility Plan, which currently includes five major toll roads in the Austin area. The lege session has made it difficult to convene all members, and toll opponents are hoping to build support for downsizing the highway plan and possibly substituting a local option gas tax (filed by Austin Sen. Gonzalo Barrientos) for the tolls.

• It's official: Johnston High School is one of nine Texas schools to win a $390,000 Innovative Redesign grant from the Texas Education Agency. Following a plan trustees approved in February, the grant will support the process of turning Johnston into three separate academies with distinct academic and career foci – the first step in a planned "redesign" of all AISD high schools. The trifurcation will go into effect this fall. – Rachel Proctor May

• Austin-based Whole Foods Market, the nation's largest retailer of organic and natural foods, announced last week that it would begin labeling its private-label food products to indicate that no genetically modified ingredients were used in production. Although Whole Foods has vowed not to use GM foods in its in-house products since 2001, shareholders have been pressuring the company lately to put such consumer information on labels, both as a marketing tool and a way to help consumers identify and avoid GM foods. – L.N.

• Austin Energy's Green Building Program and Austin Housing Finance Corporation were presented with the EPA's Clean Air Excellence Award last week for their roles in creating the Montopolis Net-Zero Energy Homes subdivision, whose 85 planned ultraefficient homes are designed to use photovoltaic solar panels to generate more energy annually than they consume. (The homes are also designed to be affordable to buyers earning less than 80% of the median area income.) The "It's the Thought That Counts" Award might be more appropriate, however, since as of March 31, the city has officially halted the Montopolis project's progress. "Preliminary estimates make it cost prohibitive to meet both the NetZero Energy goals established by Austin Energy and housing affordability standards," reads a city of Austin press release. The city maintains, however, that it's "committed to build houses on this tract of land that meet federal affordable housing and energy-efficiency standards" and will "continue to pursue this energy-efficient initiative for future developments." Final word on the fate of the homes is expected by the end of next month. – Daniel Mottola

• In a new twist to the enduring saga of South Congress Avenue, Bouldin Creek neighbors gave their seal of approval last week to revised plans for the 1400 S. Congress redevelopment, land currently occupied by Capitol Car Credit. When property owner and Güero's proprietor Rob Lippincott and his associates presented neighbors with preliminary plans in January, the Bouldin Creek NA took issue with the development's massive buildings and parking garage structures across from one-story single family homes, as well as the potential for dense traffic on residential streets. "The revised project represents a substantial improvement over the original," BCNA President Cory Walton said. "The developers sought out neighborhood feedback early on in their planning process and modified the project to address serious neighborhood concerns." The revised project removes the commercial traffic flow from Eva Street, the residential street that borders the development, and also dramatically lowers the height of buildings facing Eva. BCNA Vice President Kathie Tovo called the experience "a model for how developers can and should work with neighborhood associations across the city." – D.M.

• The Austin Revitalization Authority continues to tinker with zoning in the city's Urban Revitalization Plan along the East 11th and 12th Street corridors just east of downtown, exchanging community parking for the local neighborhood's support of greater zoning height closer to I-35. At last week's Council meeting, where the changes were approved, ARA Executive Director Byron Marshall called the 15-month negotiation process with the surrounding neighborhood "highly successful." New plans create a three-tier zoning system, with the highest intensity closest to I-35, where buildings could be 60 feet tall, with two subsequent subdistricts "stepped back" to 50 feet and then 35 feet. Reduced setbacks and high impervious cover limits, unaddressed in the original Urban Revitalization Plan, were also added in the concessions between the neighborhood and the ARA. – Kimberly Reeves

• U.S. Rep. Lloyd Doggett, the region's lone Democratic envoy to Washington, made a quick swing through town on Monday to talk about federal budget issues, along with most of the state's Democratic congressional delegation. Given the schizophrenic nature of Doggett's district – he now represents both Central Austin and South Texas – his concerns were equally split: While he spoke passionately about cuts to federal loan and grant programs for higher education, he is now equally concerned about the state's border security policies. Doggett says it's time to put a face on the Bush administration's budget priorities, which have meant huge cuts to programs that matter to Texas families. "The Bush administration has dug this huge fiscal hole in creating the largest deficit in American history through irresponsible policies that drain the Treasury," Doggett said. "Now they want those who are not responsible for the deficit to pay for those irresponsible acts. All of us are impacted by these decisions in a big way." – K.R.

• After months of strife over the possibility of toll roads in the region, a regional gasoline tax sounds good to some local leaders. Mayor Will Wynn and Rep. Mark Strama, D-Austin, expressed support for considering a three-county tax in a letter that went out late Tuesday. Estimates provided at CAMPO's Monday night Transportation Policy Committee meeting, requested by Strama, were that Central Texas drivers could pay for the unfunded portion of the imminent $1.7 billion toll road plan at the cost of 3.7 cents per gallon. Sen. Gonzalo Barrientos, D-Austin, revealed that he had filed a regional gas tax bill. It has yet to get a hearing in the Senate Finance committee, and he anticipates opposition to it. For a regional gas tax to go into effect, voters in Travis, Hays, and Williamson counties would have to approve it. – K.R.

• The Texas Education Agency is in a tough spot this week, singled out by U.S. education secretary Margaret Spellings for poor performance with special education students. Spellings was education adviser to then Gov. George W. Bush when state lawmakers approved the creation of an alternative assessment to test those students labeled in need of special education. But Spellings was a lot less charitable last week when asked by reporters about the possibility of waiving new, tighter accountability requirements in favor of the state's special education testing program. She said Texas was leaving far too many children behind when it came to the federal No Child Left Behind act. Now the agency is in the position of trying to justify its special education program to a president who once signed that program into law. The state's justification is due to the Department of Education on Friday. – K.R.

• El Concilio and LULAC will hold a City Council candidates' forum on Tuesday, April 19, 6:30pm, at Zavala Elementary School, 310 Robert Martinez. Representatives for and against the proposed smoking ordinance also have been invited to attend. For more info, call 576-7805 or 477-7512 or e-mail razagavino@aol.com.

• Leading progressive social critics Tariq Ali and Laura Flanders will discuss political trends in the United States and the world on Wednesday, April 20, at 7pm in UT's Jester Auditorium (southeast corner of Speedway and 21st). Ali is a filmmaker and historian, and current editor of New Left Review; among many other gigs, Flanders hosts her own show on Air America Radio every Saturday, 6-9pm (aired locally on KOKE 1600AM).For more info, go to www.thirdcoastactivist.org or call 458-8635.

• Big Choices: The Future of Social Security, a policy symposium with panelists from the Brookings Institute, the New America Foundation, the Heritage Foundation, the National Committee to Preserve Social Security and Medicare, and others, will be held Thursday, April 21, 12:30-5:15pm, at Bass Lecture Hall on the UT campus (LBJ School of Public Affairs, Red River between Manor and 26th). For more info, call 471-4746 or go to www.utexas.edu/lbj/
news/spring2005/big_choices.html.