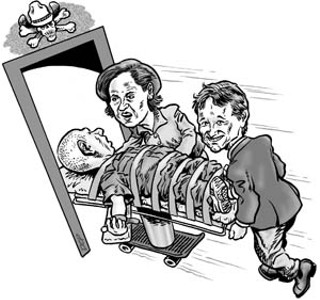 Should Austin Republican Rep. Terry Keel's HB 268 pass through the Lege as currently written, Texas may become the first state in the nation to fast-track federal appeals for indigent death row defendants – clearing the way for the state to whisk their gurneys to the death chamber, potentially without the benefit of any meaningful federal appellate review. To hear Keel tell it, that outcome would be an affirmation that his bill has so effectively raised standards for attorney appointment in indigent capital cases that the feds will be willing to trust the well-oiled efficiency of the Texas death penalty system.

Primarily, the bill seeks to expand the pool of qualified lawyers by making eligible former prosecutors and appellate lawyers who have no previous experience defending capital cases at trial. Under current law, a lawyer must have experience as a second-chair defender to be eligible for lead counsel. Keel argues that since there are relatively few death trials each year, that's too great a hurdle, and effectively just a way for defense attorneys to protect their legal turf. But the qualifications would also apply to those attorneys eligible to handle post-conviction habeas corpus appeals – thereby qualifying the state for federal "opt-in" status, triggering a set of federal provisions that would drastically reduce the amount of time attorneys have to file federal appeals, as well as reducing the ability of defendants to receive stays of execution.

Congress' last real modification of the law governing federal death case review came nearly a decade ago, during the Clinton administration, with the passage of the Antiterrorism and Effective Death Penalty Act of 1996. If a state's statutory standards meet AEDPA requirements – basically, only that the state "provide standards of competency for the appointment" of habeas counsel – the state may qualify to opt in to "special procedures," including reducing the period allowed for filing an appeal from a year to six months – drastically reducing the amount of time attorneys have to investigate and prepare their cases – and prohibiting federal courts from staying an execution if the attorney is tardy in filing a federal writ. Lawyers would have to litigate death cases under the gun to beat execution dates.

According to the Texas Defender Service's 2002 report on Texas death penalty appeals, late filing has been a problem, in part because the federal rules are complicated and many attorneys misunderstand them – including those the state otherwise deems eligible for appointment. Even under the current deadlines, Texas has executed four death row prisoners whose cases were never reviewed by a federal court because their attorneys filed their appeals late – a circumstance that has not happened in any other state. No one, including the Court of Criminal Appeals, which maintains the list, does anything to ensure that the attorneys listed are actually able to handle the job.

Nonetheless, Keel's bill would apply the same standards required for trial appointment to habeas appeal attorneys, thus triggering the opt-in language. Theoretically, the opt-in provisions are intended as a quid pro quo – offering a s tate-hastened finality in death cases in return for providing competent lawyers to indigent capital defendants. Yet if Keel's bill passes, it would be a "quid without the quo," says Jim Marcus of TDS, because the standards don't require that the work of the eligible attorneys be reviewed to ensure that they're actually providing competent and effective counsel.

For example, under Keel's bill, David Chapman, who represented executed inmate Leonard Rojas, would still be qualified for appointment, even though he failed to timely file Rojas' appeal and had received three probated suspensions from the Texas State Bar – the third coming just two weeks before the CCA denied the appeal he filed on Rojas' behalf. Two months after Rojas' execution, CCA Judge Tom Price authored a stinging opinion in Rojas' case, decrying the court's unwillingness to intervene despite serious issues regarding Chapman's competency. Presiding Judge Sharon Keller's response proclaimed that Rojas' statutory right to "competent counsel … applies only to the attorney's initial qualifications" – such as Keel's list of appointment standards – "and does not apply to the final product of representation."

On March 1, Austin attorney Gary Hart, who has been handling death row appeals for nearly a decade, told Keel's Criminal Jurisprudence Committee that applying blanket standards for appellate appointments would be "extremely dangerous and extremely embarrassing, ultimately. … There are ways to accomplish the same thing without making Texas the first opt-in state in the entire country." Although Keel told the committee that it was not his intent for Texas to become an opt-in state, he said he would not favor requiring the state to conduct an annual review of the lawyers on the appellate appointment list.

Despite the concerns of several members, the committee voted to move the legislation to the House floor, where it was voted out on March 21, with only Rep. Lon Burnam, D-Fort Worth, voting against it. Rep. Pete Gallego, D-Alpine, offered an amendment, which Keel initially accepted, that would've required the CCA to do an annual review of the appellate attorneys, creating a case-by-case system for approving their appointments and thus bypassing the opt-in provision, while still raising qualification standards. But just before the vote, Keel amended the bill again, striking the case-by-case review and reinserting the opt-in language. The bill then passed with 140 votes, including that of Gallego. Whether it will be as well-received in the Senate remains to be seen.