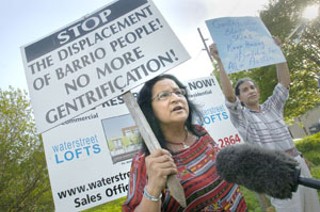 On March 31, about 30 people gathered in front of a large sign marking a small, grassy lot at the intersection of Comal and Cesar Chavez as the future site of the Waterstreet Lofts, a multi-use residential live/work complex with prices starting at about $180,000 for just over 800 square feet. Those gathered were called to action by People Organized in Defense of Earth and Her Resources, an Eastside group that believes that development projects like this will displace current neighborhood residents. "Our primary goal is to make sure that our community can still live here in East Austin, to sustain and retain the people who have lived here for generations," explains PODER's co-founder and director Susana Almanza. Like her parents before her, Almanza has lived on the Eastside all her life. She blames the 2001 East Cesar Chavez Neighborhood Plan zoning changes, which blanket-zoned the area as commercial mixed-use, for opening up the neighborhood to development. "We're single-family housing over here, and on top of that, we're low-income. So for them to start building these high-priced condos – they're not compatible."

"We are 100% compliant with the current neighborhood plan," says Terry Ortiz, the structural engineer for Waterstreet Lofts. "My intent is to do quality architecture, something that will be an asset to East Austin." Currently a resident of South Austin, Ortiz, a fourth generation East Austinite, plans on living in the lofts (which are just down the street from his LOC Consultants offices) along with "young urbanites of all races." While Ortiz freely admits that property taxes will be a serious problem for the neighborhood in the near future (he suggests lowering property tax caps as a solution), he does not see the recent developments on the Eastside as part of a larger problem – not surprising, considering his involvement in the completed Pedernales project as well as the upcoming Saltillo Lofts. "A lot of that land is contaminated and is being mitigated environmentally to make way for inner city density," he says, "basically making that land amenable to people who don't want to participate in urban sprawl and who don't want to have to drive everywhere."

Here are some of the things you'll see on your way east or west from the Waterstreet site: a YMCA, a tint shop, a spoiler shop, an insurance office, offices for lease, Mexican restaurants, a funeral home, and colorful houses in varying states – in the midst of renovations, steadily declining, and holding steady. All around, there is an array of social service organizations, among them the Push-Up Foundations, which provides transitional housing and drug treatment services; the CARE Program Annex, an outpatient clinic for Austin Travis County MHMR; and the Austin Affordable Housing Corporation.

"They are developing housing in an area where the majority of the people can't afford it," says Kathy Starke, director of Austin Tenants' Council, a housing rights advocacy group that has rented its space three doors east of the site for 30 years. "When I looked at the prices of those lofts, I was amazed," she continues. "We probably won't be here much longer if that keeps up."