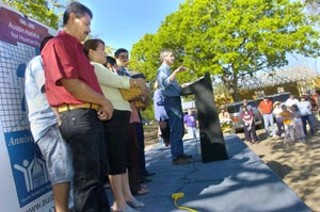 Austin Habitat for Humanity on Saturday celebrated the completion and dedication of the first two homes in its first ever Green Subdivision, located on Vargas Road. With the help of Austin Energy’s Green Builder Program and many community volunteers, Habitat will build a total of 11 energy- and water-efficient homes in the subdivision, all of which will meet the strict Four Star Green Builder Rating, and will be sold to Habitat HomeBuyers with zero-interest loans for an average price of $60,000. Austin Habitat plans to complete 20 homes in its low-income housing program this year. For more info, go to www.austinhabitat.org. – Daniel Mottola (Photo By John Anderson)

"I don't know if there is a cause-and-effect connection, but we have seen some recent episodes of courthouse violence in this country. … And I wonder whether there may be some connection between the perception in some quarters, on some occasions, where judges are making political decisions yet are unaccountable to the public, that it builds up and builds up and builds up to the point where some people engage in, engage in violence. Certainly without any justification, but a concern that I have." – U.S. Sen. John Cornyn, R-Texas. The two highest-profile incidents, in Atlanta and Chicago, involved medical malpractice and rape cases, with no political import.

• If you want to participate in the May 7 municipal election but have not yet registered to vote, put down your newspaper right now and go do it – today (Thursday, April 7) is the deadline. See "Austin Stories" below for details.

• The proposed loan from the city to rebuild the burned-down Midtown Live nightclub has been officially withdrawn after a flurry of disapproving comments from citizens. See "Point Austin."

• Freescale Semiconductor Inc. decided to keep its corporate headquarters in Austin, after debating whether to move it to Chicago.

• The hot-button issues of gay marriage, gambling, and vouchers are still percolating at the state Capitol. See our coverage of the 79th Lege throughout the news section.

• The final draft proposal for a regional water quality plan for the Barton Springs Zone will be presented next Wednesday. The draft is a collaborative effort involving a broad range of stakeholders across Travis and Hays counties. See "Austin Stories," below.

• Today (Thursday, April 7) is the last day to register to vote in the upcoming municipal elections. Mail-in registrations must be postmarked no later than today; to register in person, visit the Travis Co. Tax Office at 5501 Airport, or the satellite offices at 4011 McKinney Falls Parkway in southeast Travis Co. or 15822 Foothill Farms Loop in Pflugerville. Voter registration status may be checked at www.traviscountytax.org. Early voting runs April 20-May 3; election day is May 7. In Austin, the election will fill three city council seats, and voters will vote yea or nay on a strengthened anti-smoking ordinance and expanding the boundaries of the Austin Community College tax district. Call 854-9473 for more info. – L.N.

• Those who doubted that a motley collection of stakeholders would ever achieve consensus on a far-reaching regional plan may want to attend next week's public hearing on the final draft proposal on water quality protection in the Barton Springs Zone. Doubters will be able to eat their words, plus maybe some barbecue afterward. The planning project actually started a few years ago as a germ of an idea that grew into a multijurisdictional effort involving government representatives, landowners, developers, and environmentalists. City Council Member Daryl Slusher, together with Hays Co. Judge Jim Powers, kicked off the first planning meeting a few years ago to address growing concerns about large-scale developments sprouting up in environmentally sensitive areas of southwest Travis and northern Hays counties. The final draft, which proposes a number of protective measures that would require approval from various entities, is posted on the project Web site, www.waterqualityplan.org. The hearing will take place at 7pm Wednesday, April 13, at the Salt Lick Restaurant in Hays Co., near the intersection of RR 1826 and RR 967. – Amy Smith

• Local politicos are coming out to bat for the Austin labor community in their effort to convince AISD to adopt a prevailing wage scale that includes benefits for workers on AISD construction projects. The issue goes back to last August, when the labor community and some Democratic groups predicated their support for the district's $519.5 million bond package on AISD replacing its woefully out-of-date wage scale, which hadn't been updated since 1988. An AISD-appointed committee put together a scale of "prevailing," or market average, wages and benefits for construction contractors, but when AISD officials presented the committee's findings to the board of trustees for final approval, they recommended adopting only the average wages, sans benefits. Among those now crying foul are former mayor Gus Garcia, environmental activist Robin Rather, consultants Alfred Stanley and Peck Young, who helped run the campaign promoting the bonds, and about a dozen church leaders from the Religion and Labor Network of Austin. After a month of behind-the-scenes negotiation between the district, trustees, and labor, plus several large protests at AISD board meetings, trustees will vote on the wage scale April 11. – Rachel Proctor May

• Central Texas' gay community takes a step into the fluorescent limelight this month with the introduction of a locally focused gay and lesbian magazine to chichi Central Market's free publication racks. Shout, an arts, entertainment, and leisure publication that comes out (no pun intended) the first and third Thursday of each month, will initially appear at the Lamar Boulevard flagship store with its April 7 issue. "It's the first time in HEB's 100-year history that they have invited, much less allowed, a gay and lesbian publication in their store," said editor and publisher Rob Faubion. Shout, which appears primarily in Austin and San Antonio, began publishing in September. It features area arts and entertainment news and community event information, among other things. The magazine's print run will increase 25% next quarter as a result of the new distribution deal, said Faubion in a press release. "We plan now to include the remaining Austin and San Antonio Central Markets in our distribution mix by the beginning of the third quarter, and simultaneously expand into the Fort Worth market," he said in the release. – C.S.

• Weed Watch: With a little help from the Drug Enforcement Administration and the DPS Narcotics Service, the APD's Organized Crime and Narcotics Conspiracy Unit knocked out on March 16 what APD Cmdr. Harold Piatt called the "most sophisticated marijuana growing operation we've seen in some time." At a press conference last week, Piatt – flanked by the head of the DPS narco service and a local DEA honcho – displayed a cache of weapons and other armaments seized from 28-year-old Brendon Eric Hendrix's Buda-area property. (Items included military-grade night vision glasses and a zippered Bible cover craftily fashioned to conceal a .45-caliber pistol.) Piatt said the officers seized more than 414 hydroponically grown marijuana plants (with a street value of more than $400,000) from a computer-controlled grow room inside a double-wide trailer. Police also seized nearly a pound of crystal methamphetamine, worth nearly $48,000. Hendrix was charged with marijuana possession and booked into the Hays Co. jail on a $20,000 bond; he'll likely also be facing federal charges for meth and firearms possession. – Jordan Smith

• The Texas Attorney General's Cyber Crimes Unit is investigating an allegation that a seven-year APD veteran last year attempted to use his home computer to e-mail child pornography. Detective Lance McConnell has been placed on restricted duty while the AG's office conducts their investigation. In December, America Online filed 11 complaints with the National Center for Missing and Exploited Children, alerting the center that an AOL member using the screen name "x4trade," later determined to be McConnell's e-mail address, had attempted to send five different pornographic photos of underage girls via e-mail on 11 different occasions. AOL suspended McConnell's membership without notice in October. McConnell lives in Lockhart with his wife and two children; last week a Caldwell Co. judge ordered the McConnell children removed from their home pending the outcome of the investigation. – J.S.

• Texas could boost its economy by getting more kids to finish high school, says a new study by the D.C.-based Alliance for Excellent Education. The group says that just 68% of the state's high schoolers earn their diploma (that's a different figure from the official Texas Education Agency rate of 84%); cutting that figure in half could put $404 million into the state economy. Getting them to college raises that figure to $1.3 billion. The argument is based on the fact that high school grads, on average, earn more than dropouts – $42,200 for college graduates, and $26,200 for high school grads, versus $19,000 for those without a high school diploma, according to the U.S. Department of Commerce. – R.P.M.

• The Lone Star Chapter of the Sierra Club and Public Citizen are preparing a lawsuit against massive electricity provider American Electric Power, alleging long-running illegal disposal of highly hazardous waste at their Knox Lee plant. The two groups also teamed in March to sue AEP for pollution infractions at their Welsh power plant, north of Knox Lee, in Pittsburg, Texas. Both lawsuits stem in part from allegations made by Bill Wilson, a former AEP employee. Wilson, according to a press release from the environmental groups, was "fired by AEP in May 2004 after calling attention to a wide range of air pollution problems at the Knox Lee, Welsh and Pirkey power plants." He shared his information with the like-minded Environmental Integrity Project, which led to the current lawsuit, which claims that butyl butyrate blowdown was knowingly mislabeled and incinerated at the Knox Lee plant, just outside of Longview, Texas. The waste was so caustic, one employee noted, that it burnt off his gloves on contact. The suit focuses on a short period in December 2003 and January 2004, but the suit alleges similar incinerations may have been happening for the past 20 years. – Wells Dunbar

• The 2005 Annual General Meeting of Amnesty International USA will take place April 8-10 at the Downtown Hyatt. Highlights include an anti-death-penalty protest at the Capitol at 3:30pm Friday. For full details, go to www.amnestyusa.org/events/agm.