CTRMA Responds to Strayhorn: 'I Am Rubber. You Are Glue …' 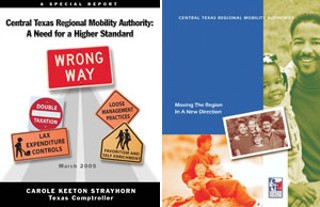 On March 9, Comptroller Carole Keeton Strayhorn issued an "audit" of the Central Texas Regional Mobility Authority, under the heading "Wrong Way." On March 30, the CTRMA responded with "Moving the Region in a New Direction." The covers of the two reports provide a snapshot of the ongoing public-relations war over toll roads.

Last week (March 30) as promised, the Central Texas Regional Mobility Authority responded to the "audit" of the agency issued March 9 by state Comptroller Carole Keeton Strayhorn. Strayhorn (under the heading "Wrong Way") had charged the agency with a host of sins, major and minor, including "organizational deficiencies, inadequate accountability to voters, insufficient safeguards against corruption … sloppy management practices, apparent 'favoritism and self-enrichment' in the appointments to the RMA, excessive budgeting for marketing, and instances of lax expenditure controls."

The CTRMA's response, under the signature of executive director Mike Heiligenstein, a multiracial cover page, and the polite heading "Moving the Region in a New Direction," is more measured in tone than Strayhorn's screed, but it flatly rejects all the most serious charges in the comptroller's report, including that two board members (Chair Robert Tesch and Johanna Zmud) may have conflicts of interest serious enough to require their resignations. The agency responds bluntly (with a specific defense laid out within) that Tesch and Zmud "do not have any conflicts of interest, have not violated any laws, and calling for their resignation was unwarranted." (Earlier in the month, Travis Co. District Attorney Ronnie Earle announced that his office had found no evidence of criminal conduct regarding real estate transactions by board members.)

In his letter to the board introducing the report, Heiligenstein expresses mild surprise that the comptroller's report was not the "financial audit" anticipated, but welcomes the review anyway. More pointedly, he writes, "We expected to be able to review the document prior to its release to the media" (a fairly standard courtesy in such reviews). The consequence, notes the report, is that several of the comptroller's complaints might have been resolved in advance, including the underwhelming discovery of $15 in unpermitted reimbursements for alcohol (e.g., a whopping $3 beer at Pei Wei) which has since been repaid. Otherwise, the agency's response accepts several of the comptroller's noncontroversial recommendations – e.g., now that they've sold the bonds for 183-A, they'll hire a contract manager – while politely questioning or rejecting several of the others.

Most broadly, the report questions the comptroller's major policy recommendations, which have to do with the state's entire toll road plan, established not by the CTRMA or any intermediate agency, but by the Legislature. Not surprisingly, the report rejects Strayhorn's characterization of the toll plan as a "double tax," noting that toll road payments are not taxes at all, but voluntary "user fees" – "Texas has embarked on a visionary plan to gradually shift the cost of major transportation projects from taxpayers to users." This is a response, says the agency, both to transportation needs and "a growing resistance to tax increases." (The report somehow fails to note that the same elected officials fanning the flames of "tax resistance" are those now flogging the "visionary plan" of toll roads.)

The CTRMA's response obviously does not close the toll road debate, but unless it provokes some counter-response from the comptroller (always a possibility) it likely puts an end to the more inflammatory charges raised by toll road opponents, and returns the discussion to the political arena, where it will proceed unabated. Since one of Strayhorn's complaints was that the agency is spending too much money on marketing, perhaps this closes the chapter titled "Pot Calls Kettle Black."