The little guy takes on Clear Channel and wins, sort of 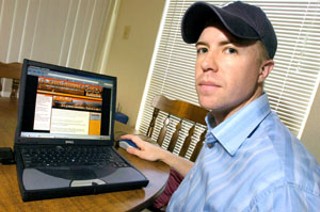 In the journalism game, this is known as a classic David and Goliath story. In the role of David we have Rob Vining, who now works as a physical therapist at St. David's Hospital. Two years ago he was a 25-year-old student who occasionally sold his bodily fluids for rent money when he took on his particular Goliath, the omnipotent Clear Channel Communications, the giant of radio and music.

The object of the confrontation was the word "sucks" – specifically, Vining's ownership of the domain name ClearChannelSucks.net. For more than a year, Vining faced off with Clear Channel over the name, in a confrontation that eventually raised larger issues about the right to criticize big corporations on the Internet and the ability of companies to protect their trademarks from snotty Web sites.

In 2002, Vining and three buddies launched RadioAid.com, a site devoted to playing music from bands not getting heard on commercial radio. In other words, RadioAid was designed as the anti-Clear Channel, a chance for people to hear music light years removed from the influence of the big company, which is often lovingly referred to as the Evil Empire.

At the time, Vining was studying for his master's degree in physical therapy at Southwest Texas State and working part-time jobs. He was looking for some new direction after spending two years as an under-6-foot walk-on "tackling dummy" on the football team. Vining, who liked to mix songs in his spare time, was plugged into an online music community, a frequent visitor to sites like AmpCast.com. He describes his own tastes as eclectic – "everything except country" – leaning toward electronic and ambient acts like Quebec Connection and Adrian Bond.

"It was just ticking me off that so many acts couldn't get on the radio," Vining said. "There really was no avenue for them."

RadioAid's results were modest at first. A few dozen bands paid $29 a year to have their music played on the site, and a bunch of others got on for free. The fee gives a band the right to post information about itself, pick which songs are played, and receive feedback. For Web surfers, it is free to access the site and stream the songs, grouped in a variety of genres.

The site, which Vining runs out of his South Congress apartment, was designed from the start to be part informational, helping bands learn about the slimy underbelly of the music industry, he says. Breaks in the music asked listeners, "Want to know why these artists are not on the radio?" and offered them a link to a series of articles from Salon.com that details Clear Channel's rise to power and the debate over the company's business practices.

To Vining, directing people to RadioAid.com by using the ClearChannelSucks.net name seemed like an appropriate twist, a chance to combine pithy corporate activism with his desire to promote a Clear Channel alternative. But on Dec. 15, 2003 – his birthday by chance – Vining received a stern e-mail from a Clear Channel lawyer, informing him that RadioAid's use of the ClearChannelSucks.net domain name was infringing on Clear Channel's trademark and that the company "would take measures" to protect its rights.

With no money for a lawyer, Vining agreed to arbitration, under the guidelines of the Internet Corporation for Assigned Names and Numbers, the organization overseeing domain name registration. After considering written arguments, the arbitrator ruled in favor of Clear Channel, concluding "the addition of the word 'sucks' … results in a domain name that is confusingly similar to [Clear Channel's trademark]." Vining looked dead in the water. He could either give up the domain or sue.

Eventually, he contacted the Electronic Frontier Foundation, a nonprofit group focused on digital rights issues. They put him in touch with Austin lawyer Peter Kennedy, who agreed to take on the case pro bono. "I'm interested in the protection of free expression," Kennedy said. (Disclosure: Kennedy also represents The Austin Chronicle.) They filed a suit in federal court, demanding the right to use the ClearChannelSucks.net domain name.

If Vining lost, it was understood that he might have to pay Clear Channel's court costs, and that he could lose his meager possessions, including the fledgling RadioAid business. "I asked him, 'Are you sure you want to do this?'" said RadioAid partner Aaron Strope, a pharmaceutical rep in Oklahoma, who went to high school with Vining in Lake Jackson. But Vining was convinced that he was right. "I wasn't surprised," Strope said. "He's always been one to stand up for what he believes."

Kennedy also felt Vining was right, but the case was moving into fairly uncharted waters. Most of the legal confrontations about "sucks" domain names focused on so-called "gripe sites" – like ClearChannelSucks.org – which are clearly defined as outlets for disgruntled customers and ex-employees to utilize their rights of free speech. In general, the courts have supported the "sucks" sites, Kennedy said, recognizing the new frontier of open expression.

But Clear Channel was also charging that RadioAid, with its 300 registered members and 200 bands, was, in fact, a competitor, and that it had the right to prevent a competitor from using the Clear Channel name. This was potentially new territory for the law, raising the issue of "gripe site by competitor," Kennedy says.

With a court date set for July, the parties met in a San Antonio conference room in February for mediation. After a full day of discussions, they arrived at a settlement. Vining agreed not to sell ads on ClearChannelSucks.net, and to disconnect the automatic link between ClearChannelSucks.net and RadioAid.com. But most important, Vining was allowed to keep the domain name and "to use it to criticize Clear Channel and attract like-minded people to RadioAid," Kennedy said.

Clear Channel representatives did not return calls seeking comment. But a spokesperson told a San Antonio paper, "RadioAid.com agreed to stop using a similar trademark to ours for commercial purposes, which was a clear violation of law. We continue to respect their First Amendment right to operate the site as an educational tool."

Type in ClearChannelSucks.net these days and a site appears that looks remarkably similar to RadioAid.com. It includes a few references to Clear Channel news and a direct link to RadioAid. "I think it's great," Vining said. "In essence, we got exactly what we wanted." Part of him wishes the case would have gone to court, "just to have the precedent," Vining said. But this particular David feels like he beat down Goliath, at least for now. "It was just the whole aspect of not bowing to the big company," he said.