An Austinite in Iraq

Local man describes the progress, failures, and dangers in Iraq after humanitarian work there

On Feb. 15, 2003, protests erupted in major capitals throughout the world. Staggering numbers of people came out to demonstrate against the Iraq war. One optimistic reporter described the noisy, jubilant crowds as a "third superpower," the superpower of world opinion. Now that the Iraq War is a fait accompli, however, Iraqis are struggling to regain control of their country, and the peace movement is struggling to understand how democracies can be coerced to listen to the people.

Henry Beutelman, an Austinite who likes to peep behind the headlines, found a rather direct approach: He went to Iraq and talked to the people in charge. Beutelman traveled to Baghdad as a member of Christian Peacemaker Teams, a nondenominational group that supports nonviolent alternatives to global conflicts. During his stay, he met and interviewed common Iraqis, the head of the UN Assistance Mission for Iraq, members of the coalition forces, and the head of the Iraqi Elections Commission.

For Beutelman, getting into Iraq itself was a feat of bravery, which included writing a letter to Iyad Allawi, the Iraqi interim president, and selecting whether he would like his body to be buried in Iraq or sent back to the United States in the event of his death. In Paris, waiting for his flight to Amman, Jordan, Beutelman was approached by a man who said his group was talking too loud and might draw unwanted attention. The man then said he was a security contractor and asked Beutelman whether he had body armor and personal security forces. "Someone coming up and telling you something like that doesn't help your disposition," Beutelman said.

Many of the human rights organizations active in Iraq left in April 2004, Beutelman said, but CPT was one of few permitted to return, largely because Iraqis requested their presence. Iraqis apparently like CPT representatives because they are good at finding detained family members, a handy skill in a country occupied by foreign forces speaking foreign tongues. Representatives receive training in documentation and observation, among other skills, according to CPT's Web site. "A lot of [Iraqis] said the American military was very friendly when they first came in, but then they got more abusive as the months went on," Beutelman said.

One Iraqi told Beutelman that after the Coalition Forces razed much of Fallujah, he tried repeatedly to enter the city to check on some relatives who had been unable to leave. He said he was eventually arrested and detained for several months, while coalition forces accused him of being a terrorist, kept him shackled in a cage, and ran assorted tests on him. Eventually he was released, but with only the clothes on his back and nowhere to return, he said. Another man described being separated from his disabled mother as they tried to make their way to a refugee camp. Worried that he would be shot if found in Fallujah, she told him to go on ahead and leave her behind.

In the eyes of the Bush administration, the much-heralded Iraqi elections justified the war. Beutelman also found a positive response to the elections within the Green Zone – the heavily fortified area of Baghdad that houses the administrative offices of the coalition forces and the Iraqi government, whose chief elections officer said the elections were 70% successful. Beutelman found, however, that outside the Green Zone, public opinion wavered. "Generally the Iraqis themselves felt the elections were not a success and that they were not represented," he said.

Though Beutelman described the general mood in Baghdad as one of confinement – a lot of people stay in their homes surrounded by armed guards – the marketplaces are active, and children, oblivious to danger, play out in the streets. Iraq, Beutelman thinks, is getting impatient with both the occupation and the insurgency. "They are ready to go for a regular society, but there's not much of civil society left right now. But if it ever gets to the point where they can build the infrastructure up again, they're ready to go."

The actions of a Chaldean priest Beutelman interviewed perhaps best illustrate the growing unwillingness to put up with the current situation. The Chaldean Church is a small bastion of Christianity in a region dominated by Muslims. Recently, a car full of insurgents tried to ram the priest's church. They weren't prepared for the priest to be armed, however, and he and other church guardians drove their attackers off in a hail of gunfire. Despite deep-seated religious differences, local Muslims approached the priest after the incident and offered him help defending his church, noting that they had guns too. "They realized that they all had to band together," Beutelman said.

After seeing the situation in Iraq firsthand, Beutelman has faith that Iraqis are more than capable of taking care of themselves. "They're pretty good at survival," he said. He believes the presence of American troops in Iraq only aggravates the situation, and he advocates an immediate beginning of a withdrawal. "My opinion is that it would be better for the military to withdraw in a graduated withdrawal," he said. "But I am in the minority." 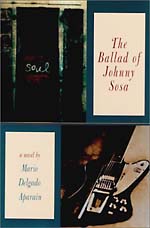 The Ballad of Johnny Sosa
Aparain has unsurprisingly already been compared to Marquez. But this rich parable shares as much with Steinbeck's The Pearl as it does with Marquez's work. Both read like a folk legend, both portray music as the yearning soul's most intimate expression, and both describe the struggle of an unsophisticated peasant- type against powerful societal forces