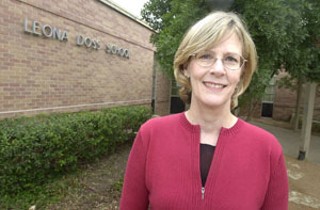 Carolyn Boyle, coordinator of the Coalition for Public Schools, has been leading the charge against vouchers. (Photo By John Anderson)

Does it surprise anyone that the legislators who voted to deny health insurance to thousands of low-income children in 2003 are now invoking poor kids to justify school vouchers? Poor kids, indeed. Put in that light, the pro-voucher rhetoric comes across sounding wholly disingenuous – but don't expect that to stand in the way of lawmakers propelling this ideological agenda forward.

Exhibit A is House Bill 1445 – a "virtual voucher" proposal and the first of a handful of related bills to go to a public hearing this week before the House Public Education Committee (see below). The House killed a virtual relative of this bill in 2003, which gives opponents some measure of optimism for a similar rejection this year. But in the larger scheme of things, school vouchers will command more attention this session, if for no other reason than that Gov. Rick Perry and House Speaker Tom Craddick have already deemed the "choice" issue a key component of education "reform." With that, expect both vouchers and an expansion of charter schools to figure into lawmakers' discussions when they take up a sunset bill to reauthorize the Texas Education Agency.

The dilemma for several House Republicans, however, is that they may have to decide between their constituents' wishes and the speaker's marching orders. Carolyn Boyle, coordinator of the anti-voucher Coalition for Public Schools, says she is sympathetic to the GOP members' predicament, given the strong-arming that went on during the debate on the widely unpopular House school finance package (House Bills 2 and 3, currently undergoing cosmetic surgery in the Senate). Boyle believes, however, that there is a certain amount of safety in numbers – and the numbers, at least at this writing, tell her that there aren't enough votes to pass a full-on voucher bill. "There seems to be more bipartisan opposition to vouchers than there was last time," Boyle said. "But what complicates the issue is [political] pressure." That pressure is further compounded, she continued, by a common refrain of "Let's just give vouchers a try and get it over with."

That's one of the reasons the pilot proposal of HB 1263 has emerged as a particular favorite, evidenced by the nine other lawmakers who have signed on to the legislation authored by Rep. Linda Harper-Brown, R-Irving, and co-author Rep. Ken Paxton, R-McKinney. ("Re-emerged" is perhaps more precise, since some form of the pilot proposal has been a voucher stalking horse for several sessions.) The bill would create a pilot school-choice program for low-income students in eight school districts in five urban counties – Travis, Bexar, Harris, Dallas, and Tarrant. (Proponents have even established a Web site, www.texaschoice.org, devoted to the HB 1263 cause.)

Chronicle readers will be shocked to learn that many of the legislative backers of the bill have received substantial political money from pro-voucher funding sources. Harper-Brown and Paxton, for example, were among the recipients of a huge windfall of cash that the national pro-voucher group All Children Matter dropped on a select number of (mostly GOP) House candidates in the 2004 election cycle. The Grand Rapids-based outfit gave $15,000 to Harper-Brown and $10,000 to Paxton, although it was unclear at press time whether they also benefited from the group's last-minute money drop just before the election.

In Texas, right-wing millionaire Dr. James Leininger finances the younger state affiliate of All Children Matter, along with a number of other pro-voucher entities. The San Antonio tycoon's money is driving much of this session's voucher phalanx, which includes lobbyists Richard H. McBride, Sabrina Thomas Brown, Mindy Ellmer, and Charles W. Evans, all registered gents of Leininger's Texans for Educational Excellence. Even with this bounty of riches, it's still uncertain how proponents will make the argument for a tax-funded voucher program in the face of an increasingly tight budget, especially for schools. Harper-Brown's chief of staff, Erin Sanders, offers a familiar argument that school vouchers won't cost the state additional money, because the per-child cost remains the same with or without the voucher program.

Boyle, of the Coalition for Public Schools, takes issue with that. "Schools typically don't budget on a per-child basis, but on a per-classroom basis," she pointed out. And since school funding for districts is based on the number of enrolled students, every student who leaves costs the district money. Boyle also points out that the pilot boundaries for Harper-Brown's bill are neatly drawn to include Edgewood ISD as one of the proposed pilot districts. She suspects it was a deliberate maneuver to serve as a "government bailout" for Leininger, who seven years ago pledged $50 million to the privately funded Horizon Voucher Program for children who live in the low-income San Antonio district made famous by the school financing lawsuit that brought us the "Robin Hood" funding scheme for public education. At the time, Leininger said he would contribute up to $5 million a year for up to 10 years, or until a state-funded voucher program was established to pick up the tab.

State Rep. Richard Raymond, D-Laredo, has added a new dimension to the debate with a proposed constitutional amendment that would allow voters to decide the issue of tax-financed school vouchers. Raymond acknowledges his bill likely won't go anywhere, but he hopes that it will provide some leverage in the voucher debate. Last month, a Scripps Howard Texas Poll on private school vouchers found that 55% of those surveyed opposed tax-financed private school vouchers. Last week, the Texas Association of Business boasted of another poll – by Baselice and Associates – that showed 74% in favor of a pilot voucher program if, as the TAB press says, "it does not cost taxpayers any additional money."

By contrast, John Stevens, executive director of the Texas Business & Education Coalition, said that while his group supports the concept of school choice, "We think there are a lot of options for students to choose from within the public school system. The bottom line," he added, "is that since the vast majority of students are going to be educated in public schools, is it really a good investment to spend public money on private schools? If so, then they should be subjected to the same accountability standards as public schools."