Strayhorn Takes Toll on the CTRMA 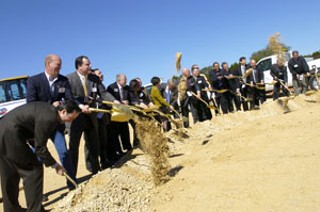 On the same day that the CTRMA board broke ground on the Highway 183-A project, Comptroller Strayhorn delivered a scathing audit of the roadbuilding authority. (Photo By John Anderson)

On March 9, state Comptroller Carole Keeton Strayhorn took her official shot at the Central Texas toll road plan, in what was nominally an audit of the Central Texas Regional Mobility Authority. Released with Strayhorn's usual fanfare, the "special report" is subtitled "A Need for a Higher Standard," and features a garish color cover illustrated by road signs announcing the report's "Wrong Way" judgments of the CTRMA: "Double Taxation," "Loose Management Practices," "Favoritism and Self-Enrichment," and "Lax Expenditure Controls." As Strayhorn sees it, the Regional Mobility Authority, appointed by regional county commissioners with the approval of the Texas Transportation Commission – the first of several planned RMAs around the state – is an ill-conceived and -executed agency, marked by organizational deficiencies, inadequate accountability to voters, and insufficient safeguards against corruption. Moreover, Strayhorn's audit found what the report describes as sloppy management practices, apparent "favoritism and self-enrichment" in the appointments to the RMA, excessive budgeting for marketing, and instances of lax expenditure controls (e.g., sloppy handling of expense accounts).

CTRMA Executive Director Mike Heiligenstein released a brief statement in response to the report, and said the agency would issue a more formal response after it had a chance to analyze the audit in detail (within 30 days). He firmly rejected Strayhorn's charges of ethical violations and conflicts of interest, and described the report as "riddled with inaccurate, outdated and erroneous information. CTRMA has stringent financial, ethical and procedural processes in place, including an 11-step financial review process for each of our expenditures. CTRMA is saving Texas taxpayers $200 million and building needed roads years ahead of schedule."

Strayhorn's report was in response to a Sept. 2004 request for an audit of CTRMA from Austin state Rep. Terry Keel and Austin City Council Member Brewster McCracken, who have been on the short end of several votes approving the regional toll road plan at the Capital Area Metropolitan Planning Organization. Keel and McCracken wrote to Strayhorn with what they called "extreme concern" over the amount of money involved (eventually $2 billion) in planned road projects, the lack of direct oversight authority governing the CTRMA, and various news reports describing the agency's considerable public relations budget.

Much of the report's detail reiterates charges against the plan and the CTRMA made by toll road opponents or previously reported in the media. Indeed, it begins by denouncing the entire conception of the Texas plan and its "conversion" of some freeways to toll roads, twice quoting Strayhorn: "Comptroller Strayhorn has repeatedly said, 'the redesignation as toll roads of roads already constructed, under construction or funded through traditional means, such as the gasoline tax, is double taxation.'" It's not clear what the CTRMA – a sub-authority created to carry out road construction programs enacted by the Legisla-ture and locally approved by CAMPO – is supposed to do about that Strayhorn complaint. In recommendations aimed rather generally at the Legislature and the governor, the report calls for changes in state law to prohibit conversion as well as requirements by the Texas Department of Transportation – inconsistently enforced against CAMPO – of making regional allocations of state road construction money contingent on the planning of regional toll roads.

The rest of the report's findings are more specific and result in particular recommendations about CTRMA's operations. The audit charges the agency with insufficient contract management, and the most inflammatory charges are against two members of the CTRMA board. Because of real or perceived conflicts of interest, Strayhorn calls for the resignations of board chair Robert Tesch and member Johanna Zmud. Tesch has extensive and valuable real estate holdings near Highway 183-A, the first project undertaken by the authority (indeed, groundbreaking on the new toll road just happened to occur on the same day Strayhorn released her report). Zmud is partner in a business (NuStats) that has performed subcontract work for TxDOT (apparently a violation of TxDOT rules).

The report also complains that Heiligenstein, as a Williamson Co. commissioner, voted to create the CTRMA and to appoint several board members, prior to his appointment as executive director: "Thus one of the persons responsible for creating CTRMA," reads the report, "found himself in the authority's top position."

In his brief response last week, Heiligenstein defended the agency and its personnel. "CTRMA has passed every financial, procedural and ethical test," he said. "There are no conflicts of interest involving CTRMA Board Chairman Bob Tesch or CTRMA board member Johanna Zmud. As part of the appointment process they have each undergone a thorough review of their qualifications and background, passing every leadership and ethical test." The CTRMA's press release also pointed to Heiligenstein's "record of public service in Central Texas," and noted, "He was hired by unanimous consent of the Travis and Williamson County CTRMA Board of Directors."