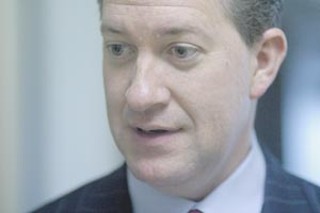 Andy Taylor, attorney for the Texas Association of Business. (Photo By Jana Birchum)

Republican lawyer Andy Taylor wasn't part of the legal team involved in last week's closely watched campaign finance trial, but he managed to steal 15 minutes of thunder outside the courtroom with a hastily arranged press conference. Taylor announced that seven of the state's largest political contributors had hired him to lobby for changes in the state's election code, specifically to "clarify" the 100-year-old prohibition on corporate dollars being used for political purposes.

It was no accident that Taylor made the announcement during a break in the civil trial of Bill Ceverha, treasurer of Texans for a Republican Majority, a political action committee accused of illegally spending nearly $600,000 in corporate money on political activity and failing to report it (see "On the Lege"). "Today this defendant is here because of confusing laws," Taylor said. "Tomorrow it could be anyone from any political party."

TPJ executive director Craig McDonald happened to be at the trial when Taylor broke the news of his election-code initiative. McDonald said he agreed that changes are needed, but he doubted whether Taylor's clients would want campaign contribution limits. McDonald returned to the courthouse a few hours later with a breakdown of the political contributions made by "The 'Corporate-Clarification' Seven." All told, they contributed nearly $5.5 million in the 2004 election cycle.

Taylor also represents the Texas Association of Business, which, like TRMPAC, faces civil claims of election law violations stemming from 2002. Plaintiffs' lawyer Cris Feldman dismissed Taylor's new initiative with a wave of his hand, calling his motives "silly and disingenuous." Feldman, who also represents plaintiffs in the TAB case, suggested that Taylor waited until the fourth day of trial to make his announcement "because we put on a very good case and they're worried."

Former Austin Rep. Ann Kitchen, one of the plaintiffs attending last week's trial, said that while she applauds Taylor's efforts, she disagrees with his statement that the case should be tried at the statehouse, not the courthouse. "My purpose in being part of this lawsuit is to stop this kind of illegal activity," she said, referring to the use of corporate dollars in political campaigns. "That law is to protect the voters."

Taylor sidestepped whether he would support pending legislation that would limit corporate money in elections (HB 1348), or cap individual contributions at $100,000 per election cycle (HB 1104). Rather, he said, he would encourage lawmakers "to examine the entire Texas election code to ensure clarity and strong protections for freedom of speech."