Anti-smoking ordinance lands on May 7 ballot 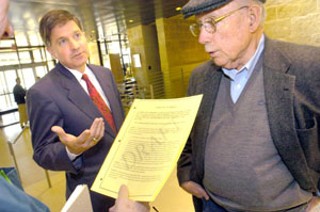 Battle lines are now in place over the upcoming public vote on a new Austin ordinance that aims to ban smoking in nearly all public places, including bars, music venues, and bowling alleys. As anticipated, City Council voted on Thursday to place the newly proposed ordinance language on the May 7 ballot, for the voters to decide whether to strengthen the less-restrictive anti-smoking ordinance that went into effect in June of 2004. The city clerk had certified on Monday that Onward Austin, the group promoting the ordinance, had gathered enough petition signatures – more than 36,000, representing 10% of Austin's electorate – supporting a strict, new ordinance to force city action. On Tuesday, local bar and club owners, fearing a loss of business, filed a federal lawsuit against the city in hopes of heading off the ordinance, and continue to organize an opposition campaign. At the same time, anti-smoking forces say they are adding business owners and other high-profile supporters to their ranks.

Onward Austin, an ad hoc coalition of citizens and nonprofits, such as the American Cancer Society and the Lance Armstrong Foundation, is facing off against Keep Austin Free, an organization founded by local bar and club owners. The arguments have resumed over the validity and accuracy of data cited by both sides, and the effect of smoking bans in other cities on local businesses. Keep Austin Free accuses Onward Austin of mounting a "well-funded and politically correct" effort to turn the argument away from what the business owners consider the central issue – personal and business freedom – to questions of workplace safety and public health. Onward Austin responds that second-hand smoke kills – period, and that the ordinance will therefore protect nonsmoking workers and customers from toxic fumes.

It took the council much of its already long Thursday session to sort out the precise ballot language. There were questions over the length of the wording, and how to distinguish the dozen or so restaurants currently grandfathered with smoking permits from most city restaurants (now nonsmoking). Both Onward Austin spokesman Rodney Ahart and Keep Austin Free attorney Marc Levin chimed in, as the council attempted to balance the petition language with the requirements of the ballot. After much discussion, the council decided against specifically identifying "live music venues" on the ballot as businesses affected by the new ordinance, rejecting a proposal made by Mayor Pro Tem Jackie Goodman.

Meanwhile, a hearing before Federal District Judge Sam Sparks in Keep Austin Free's lawsuit against the city is scheduled for March 17. Keep Austin Free alleges violations of the U.S. and Texas Constitutions, as well as the city charter. Levin said, "We believe the newly proposed ordinance to ban smoking in bars is clearly illegal and unconstitutional. It is important for the public to know that this initiative will cost the city of Austin over $150,000." Levin said the city charter prohibits "the public treasury from being drained through special interest initiatives like this." Enforcement of the ordinance will inevitably violate due process, Levin said. "When a smoker commits an offense under the ordinance, the [bar] owner-operator is fined up to $2,000 even if they are unaware of the incident."

"We hope Judge Sparks will remove the ordinance from the ballot," Levin said, but even a declaratory judgment against the measure, while nonbinding on the city, would help sway voters. Keep Austin Free is pleased ballot language will make clear that smoking is already prohibited in most public places, including most workplaces, Levin said, "disabusing people of the propaganda that's going to be conveyed through Onward Austin's million-dollar TV campaign." He also said it's important for people to know that fewer than 250 businesses will be affected by the additional ban, "mostly bars, billiard halls, and bowling alleys." By eliminating this last vestige of places that allow smoking, the city would see a significant economic impact, Levin said.

Former Mayor Gus Garcia had initially sponsored a similar ordinance that was toned down to become the current law. At an Onward Austin press conference at City Hall on Thursday, Garcia said, "This ordinance should not be interpreted as an anti-economic act, or a rights issue. What people need to understand is that this is a health issue, totally a health issue. That's the reason the American Heart Association, American Lung Association, the American Cancer Society doctors and pulmonary experts want this – they see the effects every day."

Paul Silver of Keep Austin Free rejected that argument, saying the media has too readily accepted what he believes is misleading or misinterpreted medical evidence presented by smoking-ban supporters. "They've done such a good job creating the conventional wisdom that second-hand smoke is bad, they've shifted the debate by creating the assumption that their solution is the only viable option." Silver said. "Many people have interpreted data on second-hand smoke differently." But he also says that Keep Austin Free doesn't wish to get into a health debate. "We're more concerned about the impact on freedom of choice and live music."

At least one business owner has broken ranks with his colleagues. Reed Clemmons, owner of the Bitter End, Reed's Supper Club, and Mezzaluna, spoke Thursday in favor of the complete ban. He said the current ordinance puts his bar-restaurants, each ineligible for a smoking permit, at an unfair disadvantage against smoking bars, and he blames the cost-prohibitive ventilation systems required to allow smoking in bar-restaurants. "My happy hours are down 40% since the current ordinance took effect," Clemmons said. "The best-case scenario would be to let bar owners decide whether to allow smoking or not. But in reality, I know that's never going to happen in Austin again. … I have to fight for my business interests." Clemmons considers the proposed complete ban as effectively leveling the playing field among all kinds of bar venues.

American Cancer Society volunteer Megan Haley makes a similar argument, one that the voters will hear often over the next several weeks. "People don't go out in the first place to smoke. They go out to meet people, have some drinks, hear some music, do some dancing, whatever, and they're still going to do these things even if they have to step outside to have a cigarette." She said a fair ordinance that affects everyone equally won't have a differential effect on one type of business over another.

On the May 7 Ballot:

"An ordinance repealing Austin's current ordinance relating to smoking in public places and replacing it with a new ordinance that maintains the current prohibition against smoking in most public places, including workplaces, and expands the prohibition against smoking to apply to all bars, restaurants, bowling alleys, and billiard parlors, except for restaurants with restricted permits that are renewable through September 1, 2012."