The gambling action heats up at the Capitol 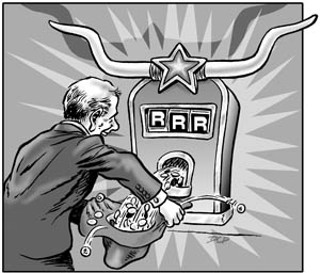 "This is not about our schools or our kids ... it is about the expansion of gambling, plain and simple." – Florida Gov. Jeb Bush

Florida offers a ready preview of what lies ahead for Texas if a proposed constitutional gambling amendment goes to the voters in November. Keep an eye on Tuesday's election results in South Florida, where voters will decide on a high-stakes, emotionally charged proposal to bring casino-style slot machines to Broward and Miami-Dade counties, a measure that proponents say would add $500 million in annual revenue to the state's education fund.

It is impossible to frame the Florida referendum as a partisan issue, because of the mix of strange bedfellows in each of the opposing camps. The same sort of unusual alignments are shaping up in the Texas Legislature, where liberal Democrats and conservative Republicans have formed alignments on both sides of the issue. But there is one major difference between the two states. While there is no mistaking where anti-gambling Florida Gov. Jeb Bush stands on the referendum, the position of fellow Gov. Rick Perry is less certain, the governor having gambled and lost on slot machines during last year's special session on school finance, which flopped ignominiously. Perry declared the matter all but dead in January, at the start of this session, and has continued to distance himself as he heads deeper into his re-election campaign. He has since indicated he would veto a Vegas-style casino bill, so the politically safe route points to letting voters decide on allowing slot machines at existing racetracks. That way, Perry and the rest of the legislative bunch can avoid any heat for literally expanding "the footprint of gambling" in Texas.

In any case, two competing proposals, both authored by Houston Democrats, are on the table at the Lege: one by Rep. Sylvester Turner that would allow video lottery terminals – slot machines – at racetracks, and another, filed last week by Sen. Rodney Ellis, that would create Las Vegas-style casino operations across the state. Either measure would require a constitutional amendment that voters would decide Nov. 8. (Earlier this week, word came that Ellis and Turner won't have the floor to themselves on gambling, as a third bill – by a yet unknown sponsor – is expected any day. Also, big casino interests are said to be angling to kill all gambling bills in Texas as any expansion would cut into their business in New Mexico, Oklahoma, and Louisiana – all of which count on attracting Texans to those states.)

But back to the two existing bills. Both carry the promise of additional revenue for the state, and Turner's is specifically touted as a means of providing a much-needed cushion for education. But it is Ellis' proposal – billed as the Texas Economic Development and Job Creation Act – that is quickly gathering steam as the state's next Million Dollar Baby. Senate Joint Resolution 18 would create a Texas Gaming Commission (merging the Racing Commission and the Lottery Commission) to oversee a much larger gambling landscape – one that would include 12 major casino gambling operations, including seven in urban areas, two on Gulf Coast islands, and three in areas targeted for economic development and new job creation. Ellis, who joined Rep. Charlie Geren, R-Fort Worth, for a media briefing Feb. 24, cited a study that economist Ray Perryman conducted projecting an annual gain of $2 billion for the state and $730 million for local governments once the casinos become fully operational. Additionally, the study estimated that the three-year construction phase of the casinos would create 250,000 new jobs.

Ellis pointed out that Texas voters have made the final decision on many important yet contentious issues. "They voted on a statewide lottery and the right to carry a concealed handgun," he said. "After years of gridlock on another important issue, it is time to once again go to the voters." Ellis' proposal could spell trouble for horse breeders and racetrack owners who favor Turner's narrowly defined bill to allow for video lottery terminals only at racetracks and Indian reservations, as well as one location at each of nine areas around the state. Turner has said his bill would generate $1.2 billion in new revenues.

Both bills give weight to early predictions that gambling would become a centerpiece of the session, particularly as lawmakers continue to grapple with the funding components of HB 2 – the leadership-driven school finance bill that has most Democrats, teachers, and school administrators aligned on one side, and most Republicans and business groups on the other. The education bill is expected to move to the House floor this week or next.

As in Florida, education groups may be all over the map on gambling if the issue moves beyond the Lege. Texas Federation of Teachers spokesman Rob D'Amico said TFT wouldn't oppose a gambling measure for general revenue but wouldn't favor any proposal linking gambling revenue to education. "Additionally, we agree with arguments that gambling hits the poorest the hardest and can be an addiction problem for others," D'Amico said. "So tying gambling revenue to education funding could send the wrong message if anyone proposes something akin to 'gamble for our kids.'"

For all of the social costs associated with gambling, more states are rolling the dice on slot machines and the like to shore up cash-strapped budgets, said Mandy Rafool, a policy analyst with the National Conference of State Legislatures in Denver. Indeed, whether it's the lottery, bingo, or slots, the once unsavory vice has emerged from the shadows to become a respectable revenue generator in every state in which it's legalized except Hawaii and Utah, according to Rafool's findings. Slot machines at racetracks were the most common gambling-related proposals under consideration in 14 states last year, including Texas, she said, though she added that legislators now are more inclined to pass the matter on to voters rather than risk their political careers on a hot potato. That doesn't necessarily guarantee success for gambling interests, Rafool said, as voters rejected gambling proposals in several states last year. Given those odds, if they do succeed at the Capitol, the gambling industry can expect a tough, expensive fight in the Texas Bible Belt.