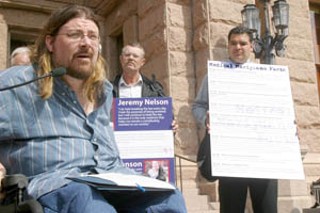 Activists from Texans for Medical Marijuana converged on the Capitol on Feb. 17 to urge support for House Bill 658, which would allow medical necessity as a defense against prosecution for possession. Chris Cain (in wheelchair) told TMM supporters on the Capitol steps about the harassment he has received from law enforcement officials for his support and use of medical marijuana. For more info, see "Weed Watch." (Photo By Jana Birchum)

"Burn baby, burn." – Message on an APD squad car's computer screen outside the fire that destroyed the Midtown Live nightclub. APD officials have since apologized. See "Austin Stories," below.

• Activist Sal Costello and the Austin Toll Party have conceded defeat in their attempts to recall Mayor Will Wynn, failing to get enough petition signatures by the deadline. See "Austin Stories," below.

• Ted Siff has stepped down as director of the Austin Parks Foundation. More next week.

• In case you've been living under a rock the past few days, the legendary Hunter S. Thompson committed suicide on Sunday. See "Page Two."

• Having failed to gather enough signatures to force a recall vote on Austin's May ballot, the organizers of the Austin Toll Party anti-toll road effort have announced a new petition campaign, this one aimed at opposing 15 or so officials, from Gov. Rick Perry on down, seen as supporting tolls, soft on tolls, or insufficiently anti-toll. The initial recall effort was aimed at Austin Mayor Will Wynn and two city council members, Brewster McCracken and Danny Thomas, but the latter two were dropped from the effort last week. On Monday, Toll Party founder Sal Costello said the effort to recall Wynn had fallen short – but that the organization would begin a new campaign to gather signatures areawide against Perry, Wynn, and a baker's dozen of CAMPO board members who have supported a toll plan for regional highways. The petitions would have no electoral force but would serve notice of public opposition. – Michael King

• Starting this summer, rookie APD officers will be assigned to varied shifts throughout the department and will receive additional mentoring from more senior officers, moves that Chief Stan Knee hopes will cut down on the possibility that two rookies are partnered or will respond to the same call. The changes come in response to the death last June of rookie Officer Amy Donovan, who was pinned against a telephone pole by a patrol car driven by her partner, fellow rookie Officer Adrian Valdovino. Donovan was the first female APD officer to die in the line of duty. – Jordan Smith

• A Travis Co. jury on Feb. 11 found Chidalu Amobi not guilty in the beating death of 2-year-old Khyrian Simms. Prosecutors said that on Sept. 6, 2002, Amobi entered Simms' apartment with a friend of the girl's family and attacked her, striking her head repeatedly; Simms died five days later. Amobi, 25, had been released from the Austin State Hospital less than 24 hours before the attack; at the time Amobi's mother said that her son suffers from schizophrenia, for which he was not receiving adequate medical care, although she was also adamant that Chidalu was not responsible for Simms' death (see "Mental Health Care Meltdown," Dec. 20, 2002). Interestingly, Amobi's mental health was not a major factor in the courtroom – since he pled not guilty, his defenders shied from any form of an insanity defense, and instead argued that Simms' death was actually an accident caused by her mother during a fight with Simms' father that afternoon. In part, they pointed out that Simms' head showed trauma suggestive of a single, fatal blow, and not repeated strikes to the head as the state alleged Amobi delivered on the toddler. – J.S.

• The Austin City Council postponed indefinitely the purchase of 90 Taser stun guns from Taser International, for just over $75,000. The department already has almost 900 of the company's stun guns, primarily the police model X26, which delivers a 50,000-volt jolt of electricity from a distance of up to 25 feet. Concerns about excessive use of the stun guns and safety have prompted nationwide calls for stun gun moratoriums and increased research into their use. So far only New Jersey has banned their use entirely, by both police and consumers. According to a report released late last year by Amnesty International, 74 people have died after receiving a stun gun jolt since 2001. Meanwhile, The Arizona Republic reports that the U.S. Securities and Exchange Commission and the Arizona Attorney General's office are investigating the Scottsdale, Ariz.-based company's claims about the safety of its stun guns as well as an end-of-year sale that helped the company meet annual revenue projections. – J.S.

• Austin Police Chief Stan Knee said his department is investigating an "inappropriate" message commenting on a fire that destroyed the Midtown Live club on Cameron Road on Feb. 18, which was transmitted via a patrol car computer. The message read, "burn baby, burn," reported KVUE-TV. The club, a favorite black-owned Eastside business, began filling with smoke during Friday happy hour; two firefighters suffered minor injuries while putting out the blaze, which AFD officials said was caused by a short in a ventilator fan. Capt. Palmer Buck said the damage has been estimated at just over $1 million. According to KVUE, witnesses saw the "burn" message on the computer screen of an APD patrol car at the scene. On Monday, Knee apologized for the flip and disparaging remark, and said the department has initiated an internal affairs investigation into the incident. – J.S.

• Most community college students intend to transfer to a four-year university, and under a new agreement between Austin Community College and Texas State University, it will now be easier to negotiate the transfer. Because different colleges' course offerings are never exactly equivalent, students have long complained of unfairly losing credit when they transfer. Under the new agreement, the institutions agree that any credits earned in one of 33 majors will automatically transfer from one to another. – Rachel Proctor May

• Seven months after he was dumped by KEYE-TV for saying a bad word, sports anchor Robert Flores has landed a job with ESPN News. He'll start in mid-March on the all-sports network, which he regards as the "pinnacle of the profession." The Houston native spent four years as a sports anchor on KEYE, the local CBS affiliate, before he was dumped for dropping the f-bomb while taping a segment for the morning show. When the tape accidentally aired two days later, Flores was fired under CBS's new zero tolerance policy for indecency. Flores says the incident came up during his agent's talk with ESPN, but was not an issue. "I'm going to look at my days in Austin fondly, despite what happened," Flores said. "As it turned out, KEYE's decision to fire me was a great move for me and my family." – Kevin Brass

• Eco-Wise, Austin's self-proclaimed "earth-friendly everything store," has teamed with local biodiesel retailer Austin Biofuels to sell its soy-based alternative fuel at their South Congress shop. Available six days a week (Monday-Friday, 11am-7pm, and Saturday 10am-6pm), the biodiesel is sold on a bring-your-own-container basis and will run in any diesel vehicle. ABF Marketing Director Jeff Plowman said the move is intended to serve people who may want to try 5 gallons or so, but may not be able to visit their retail location off Slaughter Lane in Southeast Austin during Wednesday sales hours. He said he hopes to reach more customers by making the biodiesel available in a central location with longer hours. Those interested should call Eco-Wise (326-4496) for pricing info, as numbers are expected to fluctuate in the next few weeks when nationwide tax incentives for alternative fuels take effect. Currently, ABF sells biodiesel for $3.40 per gallon at their retail shop. More info at www.austinbiofuels.com and www.ecowise.com. – Daniel Mottola

• The House Insurance Committee heard the "pros" and "cons" on credit scoring on Monday. Rep. Fred Brown, R-College Station, has filed HB 23 to eliminate insurance carriers' use of credit scoring to set insurance rates. Those who oppose the use of credit scoring, such as Ware Wendell of Texas Watch, say Hispanics and African-Americans are disproportionately represented in the poorest credit score categories, which can lead to a 400% swing in the cost of insurance. Minorities pay an unfair price for poor credit scores, even when they have exemplary driving records. Proponents, such as Floyd Beaman of the Texas Coalition for Affordable Insurance Solutions, says the safeguards of last session's SB 14 are doing their job and will make sure credit scores are applied fairly by insurance carriers. "Part of the competitive marketplace is allowing companies to use valid tools as they see fit, as long as that use is not found to be unfairly discriminatory," Beaman said. "Looking at all the factors, the Texas Department of Insurance did not show a disproportionate impact of credit scoring on Hispanics and African-Americans. It was not cause and effect." – Kimberly Reeves

• Rep. Jerry Madden, R-Plano, unveiled his bill for a statewide virtual school network in a news conference on Tuesday. The bill may be a bit more palatable to the educational community than last session's virtual charter school concept because it would involve courses provided by local school districts, administered through the Texas Education Agency. Students, including homeschoolers, could access a full range of courses through the Virtual School Network, up to and including a high school diploma. Madden says he expects most users to be students seeking one or two extra courses in order to add an extra course or to graduate early. – K.R.

• A hearing on the proposed Transit-Oriented Development Ordinance, hosted by the city Zoning Department, will be held tonight (Thursday), 6:30-8:30pm, at One Texas Center, 505 Barton Springs Rd. #325. See www.cityofaustin.org/development/
transit_development.htm.

• A couple of East Austin heritage events coincide on Saturday, Feb. 26: Huston-Tillotson's free College Day and African-American Community Heritage Festival runs all day on the H-T campus at 900 Chicon (505-3028 for more info; and a tour of East Austin will be provided that day by Capital Metro and Pro Arts Collective celebrating Black History Month. The 90-minute tours will highlight important cultural institutions throughout the Eastside. Noon & 3pm at San Jacinto Street between Fifth and Sixth. For more info, call 474-1200 or go to www.capmetro.org.

• A "Hand-in-Hand" rally to oppose China's anti-secession law, sponsored by the Austin Taiwanese Association and the Global Alliance for Democracy & Peace-Austin, will oppose what they see as China's attempt to annex Taiwan. Immediately following the rally, Dr. Chin-Shi Chang will speak about the effect the proposed law would have on the West Pacific region. Rally: 4-5:30pm, Congress & MLK, corner parking lot. Speech: 6-9pm, UT campus, George I. Sánchez Bldg., Rm. 104. 343-1078 or e-mail Jslee1078@aol.com.

• The NAACP and LULAC will have a joint Legislative Action Mobilization Day at the Capitol on Monday, Feb. 28, 9am-5pm. For a full schedule and more info, go to www.texasnaacp.org.