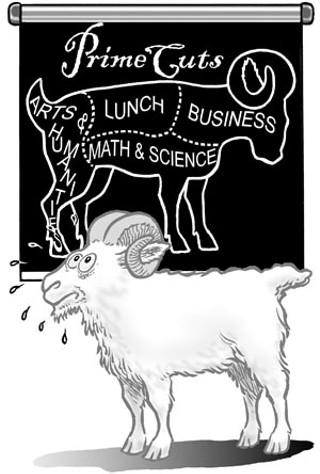 For 45 years, Johnston High School has been the Home of the Rams. As of next fall, it will be Home of the Ram Chops: On Monday, the AISD Board of Trustees approved a plan to divide the long-struggling Eastside school into three minischools. It's the first stage in a plan to slice, dice, and reconstitute AISD's large, presumably impersonal high schools into smaller, career-focused "learning communities." The surgery is experimental, however, and those with redesign experience warn that depending on whether the district is deft or clumsy, the Ram may be either the prototype of a high school renaissance, or merely a sacrifice on the altar of educational trendiness.

"Smaller learning communities are a necessary but insufficient strategy," says principal Steve Amstutz of Lee High School in Houston, which five years ago undertook a redesign that created 10 academies of about 200 students and a dozen teachers each. "It's a place to start. It creates a platform. But if you just cut schools up and don't create relationships within them, all you have is smaller, lousy schools."

But you have to start somewhere, so AISD is starting with the cutting. Johnston will be the first to go under the knife because its low test scores earned it an "unacceptable" rating from the Texas Education Agency last year; that score, in turn, made Johnston eligible to apply for a TEA grant of up to $400,000 to revamp the school. Monday's vote approved the proposal that will be submitted to the TEA. (While superintendent Pat Forgione admitted it's possible that TEA will not award the grant, he indicated the district had reasonable certainty it will get some funds.)

The proposal will essentially turn Johnston from one school into three. (Actually four, if you count the existing international high school, which already shares Johnston's facilities.) Each "academy" will have separate leaders, accountability ratings, valedictorians, and everything else that makes a school a school. "We envision the academies as totally autonomous, with separate budgets, sharing common use of the building," said Ron Smith, a Johnston teacher on the redesign committee.

The academies don't have names yet (Shank, Lambchop, and Mutton come to mind); what is clear is that each will have a distinct focus, either arts/humanities, science/technology, or "business," which includes many traditional career programs like cosmetology or culinary arts. In the coming weeks, students and teachers will choose an academy to attend; however, those who change their minds will have opportunities to switch further down the road.

Within each academy, students will choose a "pathway," similar to a college major, and related to the overall academy theme. For example, students in the humanities academy can choose the journalism or foreign languages "pathway," while those in science/technology can choose automotive technician or information technology. Ideally, every class in the academy will reinforce the theme – students in the science academy, for example, can do English pro-jects relating to their science classes, or study the past centuries' scientific advancements in history. Reinforcing the ways core classes relate to students' interests, says Johnston teacher Carl Seagren, gives easily bored students a reason to see the relevance of their classes. "One thing we see is that students don't see the purpose of many courses," said Seagren. "They say, 'Why do I have to study English?' 'Why study math?' This will help them see the purpose."

Within the academies, teachers will also "loop" with their students, meaning they'll work with the same groups for two or three years in a row. In theory, this helps students to develop the kind of positive relationships that encourage them to stay in school, and that are sorely lacking in 1,800-student schools that are now the norm. (Johnston, however, currently has fewer than 1,000.)

"It's becoming very clear that children will not stay with us if they don't feel there's an adult who cares," said Forgione. However, experts warn that while small schools can help foster relationships, small schools alone aren't enough. Ed Fuller, a UT professor of education who works with Houston ISD's redesign process, points out that if teachers see 160 students a day, it doesn't matter if those 160 students are part of a school of 400 or a school of 2,000, it's still too many kids to get to know. Plus, when schools have high teacher turnover – 47% of Johnston's teachers have less than five years' experience – many student-teacher relationships will end before they can begin.

So, Fuller says, "If you just do the smaller learning communities without trying to reduce class loads or address teacher turnover, then you'll limit their effectiveness. The danger then is that people will jump on the idea of smaller learning communities and not pay attention to the details that matter. Then the reform won't work, and in a few years we'll just move on to something else."

Fuller praised AISD for making progress on the teacher retention issue in recent years. However, he believes that more could be done on that front, as well as in reducing class sizes. Even in lean budget years, he said, simply diverting a few extra teachers away from upper grades and toward ninth grade – the year with the greatest percentage of dropouts – could make a big difference in student success.

Assuming Johnston wins the TEA grant, the district and community will spend many more months addressing these issues as they plan the final slicing of the Ram. Trustees expressed great excitement about the process, but also warned the administration not to gloss over the "details that matter." Trustee Cheryl Bradley pointed out that two years ago, when the liberal arts magnet school was moved out of Johnston to LBJ, the district also came up with a "wonderful" plan for Johnston that yielded nothing in the way of results.