Birds vs. People at BCP 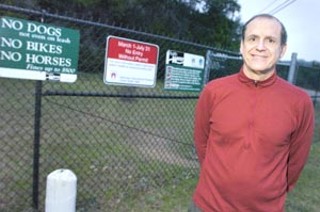 The BCP is part of the broader Balcones Canyonlands Conservation Plan, a 28,428-acre patchwork of territory owned in various combinations by the city, county, Lower Colorado River Authority, Nature Conservancy of Texas, Travis Audubon Society, and a slew of private persons. The BCCP was initially financed by a $22 million city of Austin bond package approved in 1992. The proposition promised voters "the acquisition and improvement of land to protect water quality, conserve endangered species … and open space for passive public use." The BCP includes favorite local nature spots like the Barton Creek and Bull Creek greenbelts, and Emma Long Metropolitan Park, among others.

The 13,035-acre city-owned swath of BCP is designated as a sanctuary, from the ravenous development taking place in Travis County, for two endangered migratory songbirds (the golden-cheeked warbler and the black-capped vireo), as well as for six tiny endangered invertebrates. Two years ago, the city transferred management from the Austin Parks and Recreation Department to the Municipal Water Authority, a move that has drawn a mixed public reaction. The BCP is operated under a permit by the U.S. Fish and Wildlife Service, charging the permittees, "in conjunction with managing partners, [to] control human activities to eliminate or mitigate any adverse impacts of human activities to the Warbler." Access in much of the BCP is totally restricted, while some areas are completely closed only during the six months the songbirds inhabit the park, and other areas are limited to approved educational activities and guided tours. Mountain biking, running, and hiking are allowed in about 25% of the BCP, while hiking only is allowed in 32%. But in some sections where hiking is allowed, groups of more than three are barred. That last restriction is what pushed one Austinite to question the public access policies at the BCP.

"The city is keeping people off public land," says Richard Viktorin. When BCP management instituted the rules barring groups larger than three from the BCP's Forest Ridge Preserve, Viktorin felt that his Hill Country Trail Runners organization – which was using the trails in groups to run long distances – was being singled out for exclusion. In Viktorin's judgment, "Managers are passively-aggressively demonstrating that they don't want people on the BCP." Viktorin began to look more closely at what he believes are inconsistencies in the water utility's interpretation of both the original bond referendum and the FWS permit's stipulations for public access to the BCP. He points to a different approach taken to access in another endangered species habitat, that of the salamanders at Barton Springs Pool. "No one for a second considered banning swimmers and human contact from the environment of the salamander, yet it was almost the first action taken by BCP preserve managers."

"I see reactionary environmentalism," Viktorin insists. "Damage is not coming from runners and hikers, but from development around the preserve." Viktorin initiated the reactivation of the BCP's Citizen Advisory Committee to advocate more public use, but he charges that he was denied a seat on the committee by water authority administrators. In addition to the CAC, BCP management also consults a Scientific Advisory Committee.

In defense of current policies, Steve Windhager, an SAC member and the director of landscape restoration at the Ladybird Johnson Wildflower Center, says simply, "The BCP is federally mandated to protect the endangered birds." He cites an ongoing six-year BCP study, and many studies nationwide, showing declines in nesting ability for endangered birds in areas with trails through the site. Windhager concedes that data collected on human impacts (such as hiking) are not fully understood but said the SAC must "err on the side of caution," keeping bird sanctuary sections closed until it can be shown that human access is safe.

CAC chair and former Austin Parks Foundation director Ted Siff believes BCP management is interpreting their USFWS permit guidelines to the best of their abilities, but he says the permit doesn't warrant the human-access restrictions currently in place. "For the BCP's long-term acceptance and appreciation, citizens should be encouraged to understand its purpose by getting them on the land," Siff said. "We've got tens of thousands of acres of public lands in highly urban areas. It's advisable for the city to establish controlled legal use to foster community stewardship of the lands." He cites dozens of illegal activities per month in closed areas (such as dumping, property encroachment, and unauthorized public use) as the main threat to the habitat. And, he said, the $22 million of bonds citizens authorized to buy the lands stipulated public access. The ongoing debate seems to be over the precise meaning and extent of "passive" public access.

"The BCP's primary purpose for managing the lands is for the two birds and the four invertebrates, and to ensure public access does not have a negative impact on the species," said Willie Conrad, the BCP land manager for the water utility, adding that management must follow the guidelines prescribed by the FWS permit prescribing allowable activity on the lands. He interprets "passive public access" as limited educational and volunteer access, as well as the guided nature study and bird watching now available.

The BCP's management plans are currently being updated. Windhager notes that the BCP's inception was based not on recreation but on mitigating the effects of Austin's increasing growth on endangered species habitat. But in defense of more recreational use of the preserve, Viktorin argues that "people don't usually support conservation, unless they can get on the land and learn about it."

For more on the BCP, see www.ci.austin.tx.us/preserves/bcp.htm.